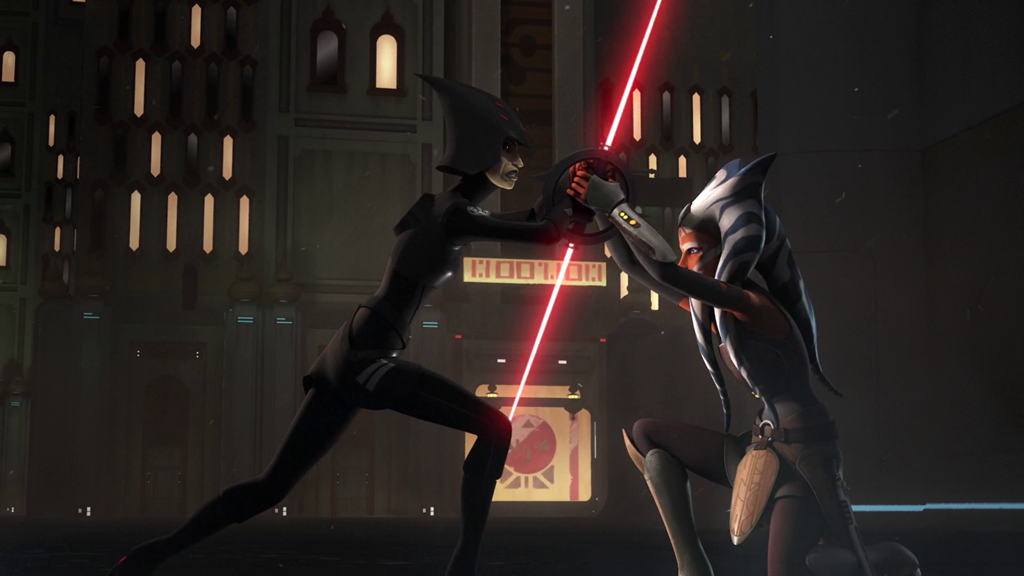 Star Wars Rebels: Season 2 Episode 10: The Future of the Force

What is it ? : A passenger transport is leaving the world of Chandel, when a Star Destroyer grabs it with tractor beams and the Inquisitors board it, killing all aboard as they search for a child. Locating the child with it's grandmother, they take it and complete their slaughter.
Ahsoka arrives at The Ghost, she has been monitoring transmissions around Mustafar and has seen orders to the Inquisitors for them to collect something from two different sets of coordinates. She will check out one set, while Kanan, Ezra, Chopper and Zeb check out the others. Ahsoka arrives at her coordinates and discovers the passenger transport, boarding it and seeing the slaughter, she finds the grandmother who explains that the Red Blades came for her grand-daughter as she breathes her last.
Landing on the world of Takobo, Kanan and Ezra head off to search the city, while Zeb and Chopper search the spaceport for the Inquisitors ships. Zeba and Chopper discover the Inquisitors ships, but as they set about sabotaging them they discover the baby kidnapped from the transport, and rescue it taking it back to the Phantom.
Meanwhile, Kanan and Ezra locate an apartment which has been ransacked by the Inquisitors and injured Ithorian who tells them that the Inquisitors came for her child, but she had sent it away with their droid. They tell Zeb to search for the Droid, and he soon locates it, sending it off with the baby's basket to distract the Inquisitors while he takes the baby back to the Phantom, but it barely makes it around the corner when the Inquisitors locate and destroy it and hear the baby's cries and chase after Zeb.
He ducks into a building, but the Inquisitors feel the child's fear and follow him in, and Ezra and Kanan arrive shortly after and find Zeb, but are located by the Inquisitors. The cut their way out of the room through the ceiling using their lightsabers and leave thermal detonators behind for the Inquisitors. Fleeing back towards the Phantom, the Inquisitors catch them just outside the docking bay and Kanan and Ezra face off while Zeb takes the baby back to their ship. The Inquisitors are far more powerful than the two Jedi, but Ahsoka arrives to balance the scales and lets Kanan and Ezra escape to the ship, and take off.
Ahsoka knocks the Fifth Brother unconscious, and disarms the Seventh Sister, but her victory is interrupted by Imperial troops, which force her away, leaping aboard the Phantom as it swoops overhead.
The Inquisitors return to the wreckage of their ships, where one of the Seventh Sisters probe droids awaits, having captured the Rebels speaking earlier and mentioning where they have been hiding between missions.

High Points : With Kanan, Ezra and Ahsoka facing off against the Inquisitors, you'd expect a load of Lightsaber action and the episode doesn't let you down, showing off the skills of trained Inquisitors against the natural talents of Kanan and Ezra (the Inquisitors are better), then their skills against those of a Clone Wars veteran (Ahsoka is far better). It's nice to be able to see and compare the talents of all these fighters, Ahsoka is far more acrobatic as the Jedi shown in the prequels tend to be, and while the Inquisitors have a few tricks up their sleeves, they aren't a match for her, being more used to facing off against padawans and untrained force users.

This story is also a sequel to a Clone Wars episode, and shows that the Sith haven't changed their methods, kidnapping force sensitive children to train up as warriors. The continuity was welcome, rather than just being evil scheme of the week, it did lend some credibility to the Sith having long term plans that they are carrying out now they have control of the Galaxy.

Low Points : While I have no major complaints about this episode, it's not one of the best, and I have one small question. Is Takobo, the world where most of the action takes place, an Ithorian colony world? Almost everyone they encounter in this episode is Ithorian, with even the random citizens wandering the streets being that species. I've no problem with an Ithorian world, but it would have been nice to have it mentioned as such, because at the moment it looks as if the animators were lazy and only bothered to load one species model when they were making this episode.

So what do you really think ? : It's still as great as most episodes of Rebels seem to be, but this didn't impress me as much as I felt it should. It's got Ahsoka in it, with her fighting the Inquisitors, which should make the episode outstanding, but it doesn't. Perhaps there's too much of the characters having to be "calm" to not scare the baby (none of the Jedi use the mind trick to calm it down), which was supposed to build tension as the Inquisitors were using the fear to track them down. But it just didn't work for me, I've just seen it too often, a baby's cries almost giving away the location of heroes, so it seemed a little stale and derivative. It's still Rebels, and still great, but not an episode I'd recommend.

Final Words : Ahsoka's been searching for information on the Sith Lord, and the Inquisitors drop his name in this episode, which means we should be moving on with her search soon, which is great. But it does make me wonder, how much of a secret was Vader's existence?
Even if his identity as Anakin was hidden away, the Jedi were traitors after all, so you'd want to hide the fact one of them was now working for you. Far easier to keep the narrative that Palpatine wants if all Jedi were bad. But Vader headed up the attack on the Jedi Temple, he is Palpatines enforcer, and I feel would be a very visible presence within the emerging Empire. Leia is very much aware of who he is when he boards the Tantive IV at the beginning of a New Hope, but Ahsoka is having to search for information on who he is. I find it a little confusing, unless Ahsoka knows the Sith Lord is Vader, but is searching for who Vader was before. Which makes sense, but the series is definitely trying to make it that Vader's very existence is shrouded in mystery, which is kind of cool, but not supported by evidence.