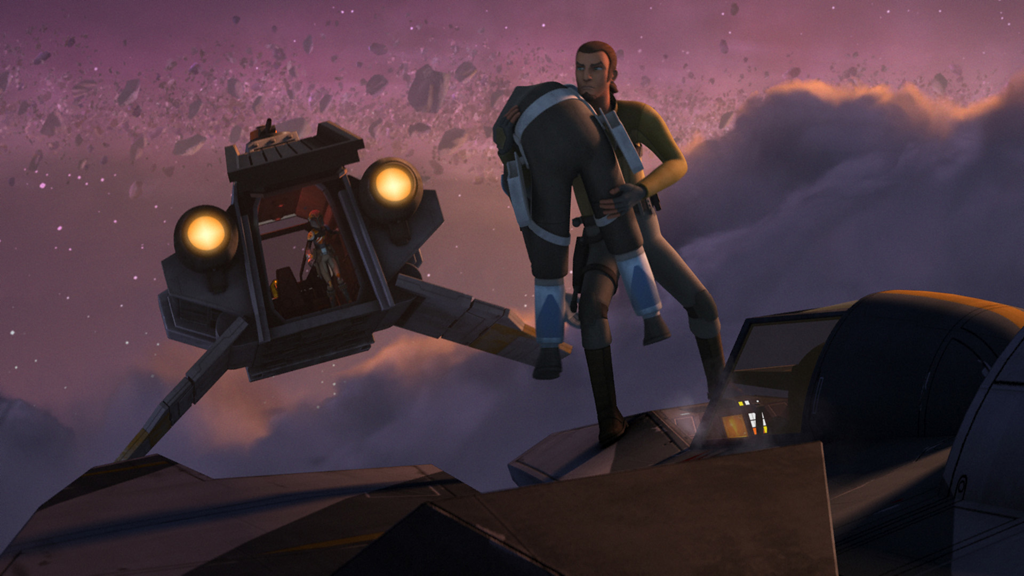 What is it ? : The Rebel Fleet is having problems accessing the Lothal Sector because the Empire is monitoring all routes into the area, however Sabine suggests she knows of a route into the system, through Concord Dawn, a Mandalorian controlled system.
The system is controlled by a Mandalorian group called the Protectors, who worked with the Republic, training the Clone Troopers, so Kanan and Hera suggest finding a diplomatic solution as recruiting the Protectors could be valuable to the fledgling Rebel Alliance.
Hera and Sabine take the squadron of A-Wings to Concord Dawn, and are intercepted by the Mandalorians, but as soon as they mention being from the Rebel Alliance, the leader of the Mandalorians reveals that they serve the Empire. Some A-Wings flee, and just after Sabine jumps to hyperspace to escape, Hera's ship is hit by the Mandalorians, emerging from Hyperspace at the fleet heavily damaged.
With Hera on life support after serious surgery, Sabine wants to return to Concord Dawn for revenge, however Kanan overrules her, saying he'll return alone and sabotage their fighters along with Chopper. He takes the Phantom, slipping through the Mandalorian defences onto the planet before realising that Sabine has slipped aboard. Kanan agrees to distract the Mandalorians while Sabine sabotages the fighters.
He sneaks into the camp, revealing himself to the leader of the Mandalorians, telling him he recognises him from the Battle of Mygeeto, where the Mandalorians action saved his life. He's claims to be returning the favour by asking them to join the Rebellion. But the leader of the Mandalorians, Fenn Rau, refuses to join another losing war alongside the Jedi.
Sabine manages to plant explosives on all but one of the fighters, but is caught before doing the final ship, and invokes a Mandalorian tradition to challenge the leader.
Fenn Rau and Sabine face off, with Rau revealing that Sabine's clan was part of the Death Watch, and an enemy of the Protectors. Sabine outshoots Rau, but only shoots his gun out of his hand, before detonating the explosives. Rau flees for the only remaining ship, but when he takes off, Kanan is clinging to the outside of the ship. As the vessel climbs ever higher, Kanan slashes at it with his lightsaber, eventually cutting his way into the cockpit, grabbing Rau and leaping to the Phantom which has been chasing them as the fighter explodes.
Having the leader of the Mandalorians as a prisoner, the Protectors allow the Rebels access to the system, rather than have their weakness shown to the Empire.

High Points : This episode merges Sabines history with what has been shown of Mandalore during the Clone Wars series, and reveals that her family was on the side of the Death Watch, and that the clans which were allied with the Republic during that series are now allied with the Empire, so are hostile to our heroes.
There's some nice action throughout the episode, with not only the battle between the Mandalorians and the Rebel A-Wings of note, but also Sabine's fight with Rau, and the climax as Kanan clings to the outside of a starfighter, hacking it apart with his lightsaber.

Low Points : Not a massive criticism of the episode, but I have to ask where in the tiny Phantom did Sabine manage to hide? She appears standing behind Kanan, but we've never been shown any compartments apart from the single cockpit/cargo area, so where was she? Does the Phantom have a toilet she was hiding inside?

I've given this episode a low mark, but to tell the truth I can't really work out why. There are no major flaws with it, but it just doesn't seem to have the zing that Rebels episodes usually have. The dialogue isn't as sparky and witty as it usually is, and things just seem a little convenient. The Mandalorians seem to only have maybe a maximum of half a dozen fighters, yet hold an entire system and are considered a force to be reckoned with by both the Empire and Rebellion. They manage to spot Hera's force within seconds of them emerging into the system, but the Phantom sneaks in undetected (we can presume it's stealthed, but nothing is mentioned). And the Mandalorians just roll over and obey the Rebellion after their leader is kidnapped, which seems just too conveniently peaceful.
And if Sabine blew up all their ships, why are the Rebels concerned about the Mandalorians anyway, what are they going to do, intercept them using their jet packs?

So what do you really think ? : I just felt this episode was a little lackluster, it was enjoyable enough, but lacked any real meaty storyline to get into. And knowing of the importance that the Mandalorians, and Fenn Rau will play in the future of the series, it's a little disappointing that their introduction doesn't impress.

Final Words : The first season of Rebels just zipped past, and was great, the second season, while being great, just seems to be dragging a little, but possibly it's just me, since I know where this season is going, and I'm maybe just impatient to get there.