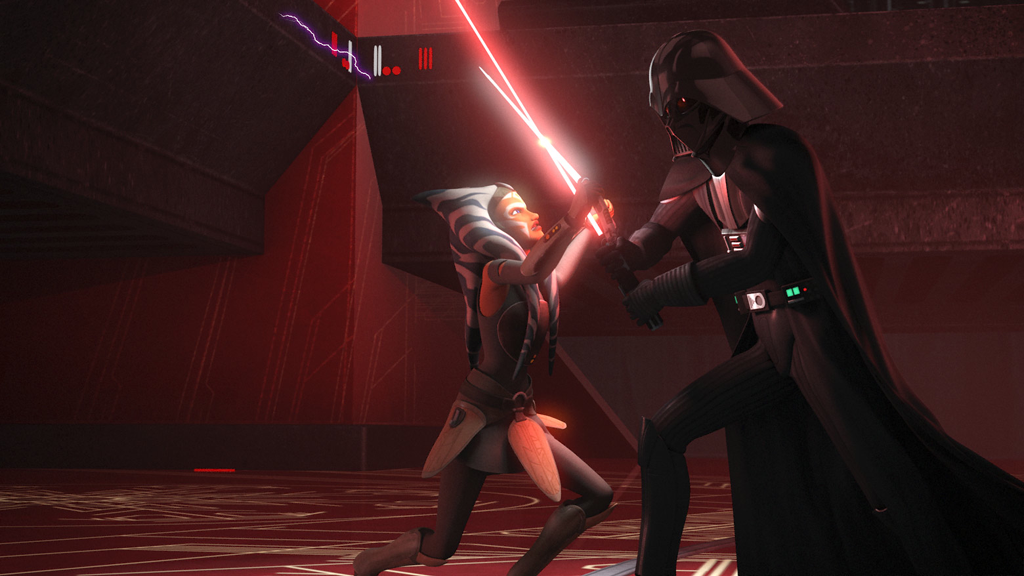 What is it ? : Ezra, Kanan and Ahsoka are heading to Malachor following the advice that Yoda gave to Ezra in the Jedi Temple on Lothal, when Rex offers to help, telling Ahsoka he would outrank her, because experience outranks everything.
Arriving at Malachor, they discover a stone circle on the surface and head out to investigate it, Ezra touches one of the stones and the surface of the planet crumbles, dropping them into an immense cavern containing a Sith Temple.
As they head across the chamber, they discover the remains of a massive battle of Jedi and Sith, their remains turned to stone as if fossilised, and they encounter another Inquisitor. They battle him, but Ezra drops into an even lower cavern, and is left behind as Kanan and Ahsoka chase and eventually disarm and capture the Inquisitor discovering he's not here for them, but is chasing a shadow.
In the lower cavern, Ezra encounters an inhabitant of the planet, who claims to have become trapped here while searching for knowledge amongst the ruins. From his facial tattoos it is obvious that this is Darth Maul, but in conversation with Ezra he asks to be called Old Master and claims to be the enemy of his enemy, and wants to destroy the Sith for taking everything from him, something Ezra empathises with.
They work together to overcome the defences of the Sith Temple, which are designed to require two to breach them, working their way down a passageway of massive stone blocks, so they must each levitate an alternate one to make their way through, and then one must use the force to propel the other across a chasm. They obtain a Sith Holocron that Maul tells Ezra is a key to this temple.
Heading outside, they find Ahsoka and Kanan whose prisoner has escaped, and they are now facing three Inquisitors. Ahsoka recognises Maul, who again states they are allies for the moment against the Empire, and joins the battle against the Inquisitors.
They fight their way up the Temple, and only when Maul sends Ezra away to the top himself, does he finally kills all three Inquisitors, and reveals his true purpose, to gain Ezra as a new apprentice and get the power of the Temple for himself. He slashes Kanan across the eyes, blinding him, but Kanan channels the force and knocks Maul from the top of the temple.
Ezra takes the Holocron to the top of the temple and activates it, the temple activates and reveals itself to be a doomsday weapon, and Ezra realises he's been fooled, turning back to get Ahsoka and Kanan, but sees a Tie Advanced arriving with Darth Vader standing astride it.
Vader easily disarms Ezra, destroying his lightsaber, but Ahsoka arrives, challenging Vader and revealing she knows who he is. Kanan makes his way to the chamber, and although Ezra is shocked to see his master blinded, they work together to retrieve the Holocron and disarm the temple, but the energy build up now begins to tear the temple apart.
Chopper arrives with the Phantom, and Kanan rushes aboard, Vader tries to stop them leaving, but Ahsoka keeps him occupied smashing his a crack in his helmet revealing the face of Anakin Skywalker. She tells the Sith Lord that she will not abandon him again, but he continues to attack her, and she seals the two of them in the chamber at the top of the temple, as the Phantom escapes, just as the Temple is destroyed in a massive explosion.
Kanan and Ezra return to Chopper base, where there is grief for their loss, Kanan is blinded and Ahsoka lost, presumed killed. Ezra is angry about the weakness that allowed him to be fooled, that didn't allow him to beat Vader, and that couldn't save Ahsoka, and couldn't save Kanan from harm, he turns to the Sith Holocron for advice on gaining power.
Meanwhile, Maul is seen flying from Malachor aboard a stolen Inquisitors Tie Fighter, Vader can be seen limping away from the ruined temple, and Ahsoka is seen returning to the Temple.

High Points : Wow, this is Epic, not only do with have the reintroduction of Darth Maul, we have a Vader vs Ahsoka lightsaber battle, with dialogue between the two former comrades, we've got the defeat of three Inquisitors, we've got Ezra taking his path to the Dark Side further than ever before, we've got Kanan permanently blinded, and a doomsday weapon. But we've got great writing, fantastic action, and an ending to everything that's gone before, but a set up for everything that follows. Rebels wipes away much of the early part of it's story arc, with Ahsoka now gone, Kanan making the change from the young dashing Jedi Knight to a more mature Jedi Master, Ezra actively seeking the Dark Side for it's power, and the Inquisitors being wiped out as a challenge to the group.

I adore the conversation at the start of the episode,


Rex: You know, I could have ordered you to take me along.

Rex: In my book, experience outranks everything.

Ashoka: *Hm*. Then I definitely outrank you.

This echoes the very first conversation the characters ever had in the Clone Wars animated movie, and is the last one we see the characters have so far. Got me right in the feels.

The fight between Vader and Ahsoka, is amazing, although Vader outmatches his former Padawan, the dialogue is amazing.

{as Ezra and Vader face off}

Vader: Then you will die braver than most.

Vader: Perhaps I was wrong.

Ashoka: It wouldn't be the first time.

{as Ahsoka refuses to turn, Vader comments that perhaps he can force Ezra to turn}

Ashoka: I thought I know who you were under that mask. But it's impossible. My master could never be so vile.

Vader: Anakin Skywalker was weak. I destroyed him.

Ashoka: Then I will avenge his death.

Vader: Revenge is not the Jedi way.

Ashoka: I am no Jedi.

{as the temple crumbles around them and Kanan and Ezra flee}

Ahsoka: I won't leave you. Not this time.

Vader: Then you will die.

And finally, Maul returns, a changed man, although how much is a performance we don't know. But he seems honest in his need to destroy the Sith, but since in his attempts to turn Ezra he says


Your passions give you strength, and through strength you gain power. You have seen it, you feel it. You must break your chains.

which is just basically the Sith code, we don't really see any difference in him, he still is on the Dark Side and still adheres to the Sith Code, even if he now hates the Sith he basically is still one.

Low Points : Maul reveals his hand a little too easily, he still expects to turn Ezra to the Dark Side, but sets about killing Ahsoka and Kanan after telling them his plan. Although he obviously plans to claim to Ezra that the Inquisitors killed the two, and only the power of the darkside allowed him to defeat them, therefore Ezra needs that power. All it takes is for one of them to survive, or let Ezra know the betrayal for the plan to fail, and it just seems a little too like the moustache twirling villain telling the hero his plan.

So what do you really think ? : I adore this episode, the story is amazing, the dialogue quotable, and the action supremely impressive. This really takes Rebels to new heights, and is perhaps animated Star Wars pinnacle, while there are some excellent episodes to come, this is perhaps it at its most epic.

Final Words : I've been rushing through Rebels, but I'm glad of the break I take between episodes this week, because I really feel I need to take a couple of days break after the emotion of this episode, I need to absorb it, and come back down to normality.