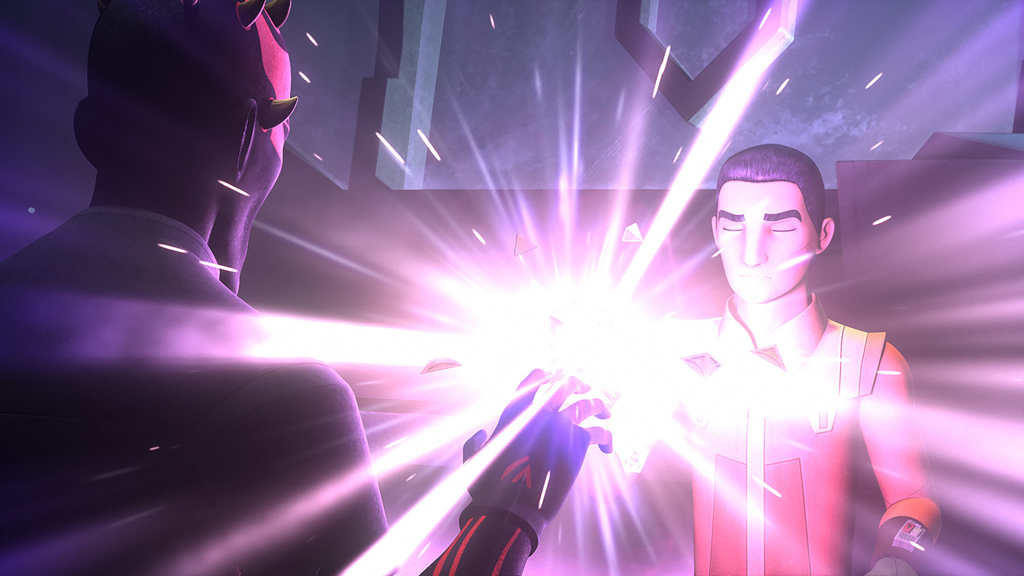 What is it ? : Ezra and Kanan are aboard the Rebel fleets Corellian Corvette, searching for a missing transport, which they discover floating in space having been attacked. Aboard they find a surviving crew member, who tells them that a red blade was responsible, and that he is targeting the Ghost.
They get in touch with Hera, to warn her another Inquisitor is coming for her, but discover that Maul has already captured the ship. He demands that they hand over the Sith Holocron they got on Malachor, and he demands Kanan's Jedi Holocron as well.
They head back to Chopper Base, to get the Sith Holocron from Bendu, but the Jedi Holocron is already aboard the Ghost, and Maul searches for it. He spends time in Kanan's quarters, eventually finding the Holocron, but sensing Kanan and Hera's relationship, and revealing he knows that Kanan Jarrus isn't Kanan's real name, it's Caleb Dume.
Meanwhile, Kanan and Ezra meet up with Bendu, who has hidden the Sith Holocron in the Krykna nest, and Ezra heads down to get it. However he still doesn't trust Kanan, and his emotional turmoil attracts the creatures to him. Kanan rescues him, and Ezra learns to trust his master again as they regain the Holocron, and then head to their rendezvous with Maul.
They arrive at an abandoned Mandalorian asteroid base, and Maul sends Ezra off to the command center, while dumping Kanan out of an Airlock. Kanan drags himself back in the magnetic field of the hangar, and goes aboard the Ghost to rescue the crew. Meanwhile, Maul and Ezra have begun opening the two Holocrons, their combined knowledge should help answer any question, allowing Ezra to look for how to defeat the Sith. The energy keeps building however, and Kanan arrives in time to warn Ezra to look away before the energy gets too much for him to handle. There is a massive burst of light, and Maul slips out of the room, leaving Ezra with knowledge but not knowing whether it's the answer to his question, or to Maul's unknown question. Maul slips aboard a Mandalorian fighter to escape, muttering about "him" still being alive, while Ezra has knowledge of Two Suns.

High Points : Another solid episode,which helps rebuild the relationship between Kanan and Ezra, dealing further with my one complaint about the last episode.
And although I skipped it in my review above, perhaps the moment of the episode I enjoyed most was the escape attempt by Hera, Sabine and Zeb, where they decided Mauls weak point was his cybernetic legs, magnetizing the ceiling to draw him off the floor, but being defeated as he is still as dangerous an opponent on the ceiling as he is on the floor. I would have enjoyed seeing this go a little better for them, perhaps disabling his legs completely, but him sabotaging the gravity system, so that it is not a disadvantage, or something which made him struggle a little.

Low Points : Maul is just back a little too soon, we've only had one episode since Rise of the Apprentice, and it just doesn't feel long enough for Maul to have tracked them down when Tarkin, Vader and Thrawn all haven't managed that feat in far longer.
Also the new found ability, of opening a Sith Holocron and a Jedi Holocron giving you access to ALL knowledge seems a little far fetched, from what we've seen Holocrons are teaching devices with the training put into them by their creator, for example we've seen lessons on Ahsoka's added by Anakin. But we've never seen them as oracles of all knowledge before, which is quite a cool concept, but does change them and their use.

So what do you really think ? : A good solid episode which I enjoyed, Ezra's return to the lightside is covered in more depth, we see a bit more of Bendu, and Maul is as menacing as ever. But it just doesn't seem to be more than the sum of it's parts, while nothing is particularly wrong with it, it just seems a little inconsequential for everything going on.
I suppose it explains what Maul was doing on Malachor in the first place, looking for the Holocron rather than the superweapon we were led to assume it was for, but that still would have left him short a Jedi Holocron, unless his plan was to wait until a Jedi turned up on Malachor, no matter how long that took.


Final Words : Having knowledge of the series, I know this leads to a showdown between Maul and and a certain Jedi on Tatooine, but there's so many other ways he could discover this information, so this doesn't feel like any major revelation, and why hasn't he gotten over it yet, he seemed quite satisfied at the end of their last encounter. But I'll leave that until they meet.