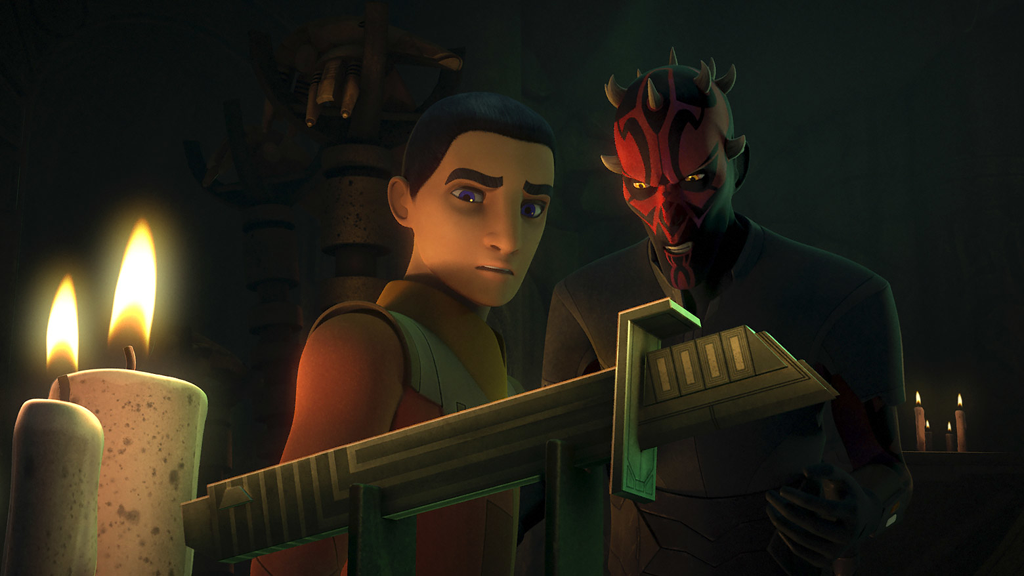 What is it ? : During a briefing for the upcoming attack on Lothal, Ezra becomes convinced he is seeing Darth Maul, and passes out. Kanan takes him to see Bendu, who warns that the severed connection with the Holocrons can cause problems, when Ezra states that he just doesn't want to see Maul again, Bendu tells him not to turn around, then vanishes as Maul enters the clearing.
Maul wants to trade memories with Ezra, to gain the rest of the vision, having already gained access to things like the location of the Rebel Base. So Ezra agrees to go with Maul alone, in return for not revealing that location to the Empire. Kanan and Sabine follow in the Phantom II, tracking Ezra's commlink, following them to Dathomir.
Maul leads him to the Nightsister temple, revealing that his people, the witches of Dathomir were destroyed as they were a threat to the Empire. Inside, Maul has gathered artifacts from his past, the DarkSaber, a painting of Duchess Satine, and the altar and potion needed to create a momentary link to trade the memories. Drinking the potion, their eyes begin to glow, and the light joins together, and they both ask for the information they wanted, Maul seeks his enemy, and Ezra seeks the knowledge to destroy the Sith.
As they recover, Maul states that of course, it must end where it began, a desert planet with twin suns. Ezra states he "cannot believe, he's still alive", but is interrupted as the spirits of the Nightsisters attack, wanting payment for the use of their magic, touching and controlling Kanan and Sabine as they arrive, their eyes glowing with the same green magic as the spirits.
With the possessed Kanan and Sabine in pursuit, Maul leads them out of the cave, where the spirits cannot leave the influence of the altar. With his friends gone, Maul tries once again to convince Ezra to become his apprentice, urging him to forget his past and memories, and joining him as a friend and brother. As Ezra refuses, Maul departs aboard his ship.
Ezra comes up with a plan to lure Kanan and Sabine out of the cave where the spirits can no longer control them, but upon re-entering is attacked by Sabine wielding the DarkSaber, but he manages to force Sabine out of the cave, freeing her.
Ezra fights with Kanan, who is totally controlled by the Nightsister spirits, but Ezra lures them out to possess him, but as they attack, he uses his lightsaber and the darksaber to destroy altar, which destroys the spirits.
In the aftermath, Ezra reveals that the holocron has told him the secret to destroying the Sith is Obi-Wan Kenobi, who is on a planet with two suns, and they must reach him before Maul does, as if Maul reaches him first, then there will be no way of defeating the Sith.
As they leave the cave, Sabine spots the Darksaber, examining it for a moment before taking it.

High Points : I really like the more ambiguous version of Maul they present here, although they keep just making him evil for the sake of making sure he's the bad guy. But the moments where he's happy to work with Ezra, as their aims are aligned really work.

The moments with Bendu are also really enjoyable as well, although why someone who is neither good nor bad hides from Maul I'm not sure, it's a good mysterious moment, but one that doesn't make too much sense, especially given the power Bendu will display later.

Low Points : Given the Jedi often receive visions, and Kanan himself acted odd on this planet when Bendu was calling out to him, why does everyone doubt Ezra when he says he's seeing Maul. Instead of being, oh, Ezra's seeing a vision of Maul, therefore Maul is back, how do we deal with this situation, they're all, oh, Ezra's overworked, he needs a rest. This shouldn't come as a shock to them, they're hanging out with a couple of Jedi, visions and the like really shouldn't come as much of a shock to them.

Not really a criticism, but a missed opportunity. We see Mauls lair, the place he's gathered everything from his life. There's a painting of Duchess Satine, there's the Dark Saber, but we don't see anything much else. I'd like to have seen something from Naboo, or something else from Episode 1 (maybe even half of his original double bladed lightsaber), something about his brother Savage Opress, maybe something from his time on Lotho Minor as a spider-like cyborg., or something from the other factions he gathered into the Shadow Collective. As I said, not really a criticism, but I'd have liked to have seen some more varied items from the characters history. It's a missed opportunity to not have something like Dryden Vos's museum in Solo, but just filled with relics from one characters varied history.

So what do you really think ? : While we put the liberation of Lothal on hold, to deal with Maul, this episode really does feel like it's part of the main storyline, and although not a whole load happens in this episode (they find out Obi-Wan lives), it's enjoyable enough and feels like we're not just taking a diversion from the plot.
And just to say, it's always great to hear Tom Baker once again.

Final Words : I'm really unsure why I'm in such urgency to move on with the plot, the episodes we're watching are enjoyable and well written, but it's like I'm tapping my foot impatiently waiting for something else to happen.
This means I'm not sure if I'm marking episodes down because they're not what I'm waiting for, instead of the great stories they are.