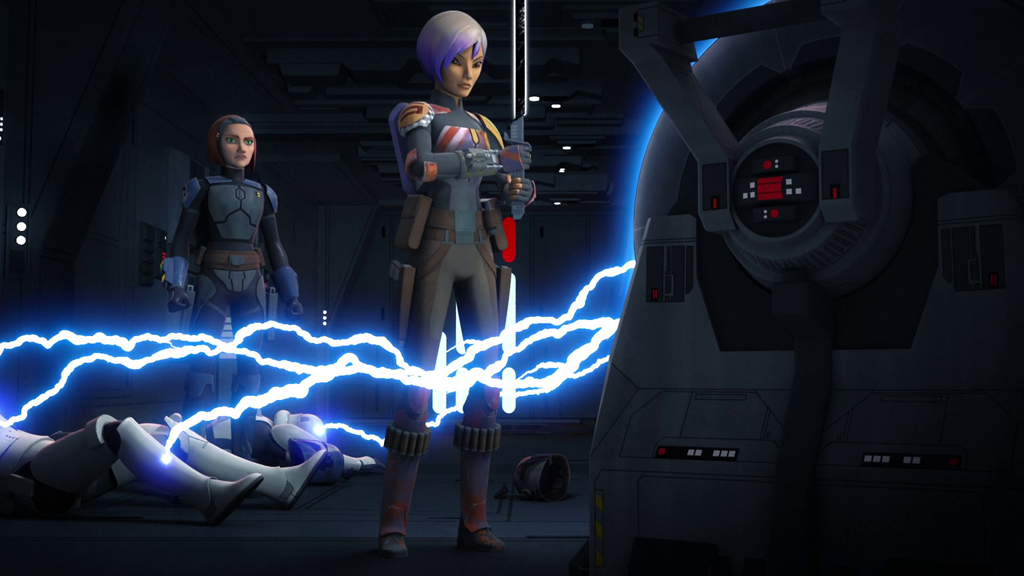 What is it ? : We pick up straight from the last episode, with Sabine, Kanan, Ezra, Fenn Rau and Alrich Wren standing in the devastation caused by the Arc Generator, and Sabine is broken thinking she has lost her mother and brother, when they emerge from nearby. They managed to get out of range when Sabine shouted a warning, but they are the only ones.
Imperial Super Commandos approach on their jetpacks, and fighting breaks out, when the heroes are rescued by a Gauntlet Fighter, belonging to Bo-Katan's forces arrives, but is chased by Tie Fighters. Fenn Rau and Ezra take to their jetpacks after Ezra complains they have no weapons to fight the fighters with, and Fenn points out that a Mandalorian with a jetpack is a weapon. After they destroy the fighters, and are heading to Bo-Katan's camp, Bo-Katan grabs Sabine by the throat for her treachery in creating the weapon for the Empire, and Tristan Wren tells her that Sabine had thought it destroyed.
And when they arrive at the camp, Sabine is further threatened as not only has her weapon killed Mandalorians, but in a dishonorable way without any kind of fair fight. As Sabine plans out the attack, Fenn Rau and Bo-Katan discuss how much Sabine has grown, and how accomplished a leader she has become.
They finish their plan to attack and destroy the weapon, and use their jetpacks to quietly board Saxon's Star Destroyer through the hangar decks, splitting into groups to delete the data on the Arc Generator and Destroy the prototype at the same time. The group trying to destroy the prototype find that it has been moved from the walker it was mounted in, and have to find where it is located. Meanwhile Ezra and Kanan search out the computers and destroy the data with relative ease, getting into a skirmish with some Stormtroopers, while the bulk of Mandalorians get caught in a battle with AT-DP walkers in the hangar bay.
Bo-Katan and Sabine find the generator, but before they can destroy it, Tiber Saxon activates it, not killing but paralysing with pain the pair, when his men complain about using this dishonourable weapon, he then extends it throughout the vessel, causing all his men agony, and turns the battle in the hangar bay as the Mandalorians are all affected and cannot continue fighting.
Sabine agrees to restore the weapon to full power if he stops, which he does and she modifies the weapon, but when he re-activates it, instead of targeting the Mandalorian Iron in their armour, it targets Plastoid in Stormtrooper armour, paralysing Tiber Saxon and all the Stormtroopers, and causing Ezra to snatch his Scout Trooper helmet off as if is effected too.
As Sabine cranks the power up to punish the Empire, Bo-Katan talks her into stopping, as it remains dishonourable no matter the target, and Sabine slashes the generator with the Dark Saber causing an overload, and the Mandalorians flee as the Star Destroyer is crippled by the generators destruction and crashes to the surface of Mandalore.
Returning to the camp, Bo-Katan talks to Sabine about being becoming leader of the Mandalorians because she made the right choice regarding the weapon,. but Sabine tells her that it was Bo-Katan's councell which made her make the right choice, and it should be her that leads the Mandalorians.
They reach the camp to find representatives of all the clans waiting, and Sabine presents the Dark Saber to Bo-Katan as the clans swear loyalty to her, as does Fenn Rau and the protectors, uniting the Mandalorian people against the Empire.

High Points : While the action in the episode is all great and I'll come back to that, but the absolute high point of the episode for me was the melting of the arc generator and destruction of the Star Destroyer at the episodes climax. The generator overloads and becomes like molten steel, and as the heroes evacuate from the Star Destroyer, you can see a tide of red hot molten metal flowing down from the labs melting it's way through the ceiling and floor.
Then as they exit the destroyer, you can see it being consumed from within, explosions and fire are visible within the ship as it fails and drops to the surface of the planet from it's position hovering next to the capital city of Mandalore. It's a visually stunning scene, extremely well executed, instead of it just exploding, we get to see it's slow death. You also see a couple of other Star Destroyers hovering over the city in the background, making it clear that while this is a major victory for the Mandalorian clans, there is still a major Imperial Presence, and a lot of work for Bo-Katan to do.

But going back to the battle aboard the Star Destroyer, it's a great fight, with the jet pack equipped Mandalorians, fighting AT-DP's, two fighting styles being used against each other, with the armoured walkers struggling to hit the fast moving and extremely mobile Mandalorians, and the Mandalorians struggling to damage the Walkers. It makes it an interesting fight, only enhanced by the influence the Arc Generators makes as it incapacitates one side then the other.

Finally, it's great to see Bo-Katan become leader of the Mandalorians, taking her sisters role once again, this one time member of the Death Watch, who fought against her sister, now uniting the Mandalorians against a common threat.

Low Points : First I have to criticise a particular scene, when Fenn Rau and Ezra and using jetpacks to battle Tie Fighters, and Ezra ends up hitting and sliding across the windscreen of a Tie Fighter. Now although it's well done, it does feel a little childish, although not as childish as when the 2nd episode of Resistance did exactly the same joke.
But that out of the way, the idea that Mandalorian Jetpacks can keep up, and in some cases overtake Starfighters in flight seems more than a little ridiculous to me. I'm totally aware that Starships in Star Wars move at extremely slow speeds within an atmosphere, but seeing it in practice just seems silly.

So what do you really think ? : A solid episode which gets the Mandalorian sub-plot of the series out of the way, now we can go back and get on with the main plots. I've never been a fan of the Mandalorians, so I may be under-rating these episodes, but even from my point of view, these seem well done, and nicely tie off a number of plot lines, while showing a little more of Sabines background.

Final Words : I'm really glad to get Mandalore behind us, as the problems I've had with Sabine and Satine throughout these episodes is incredible, I even had to go through this review with a find/replace and had mixed up the two 8 times.
Anyway, that's the season opener out of the way, onwards with the rest of Rebels final season.