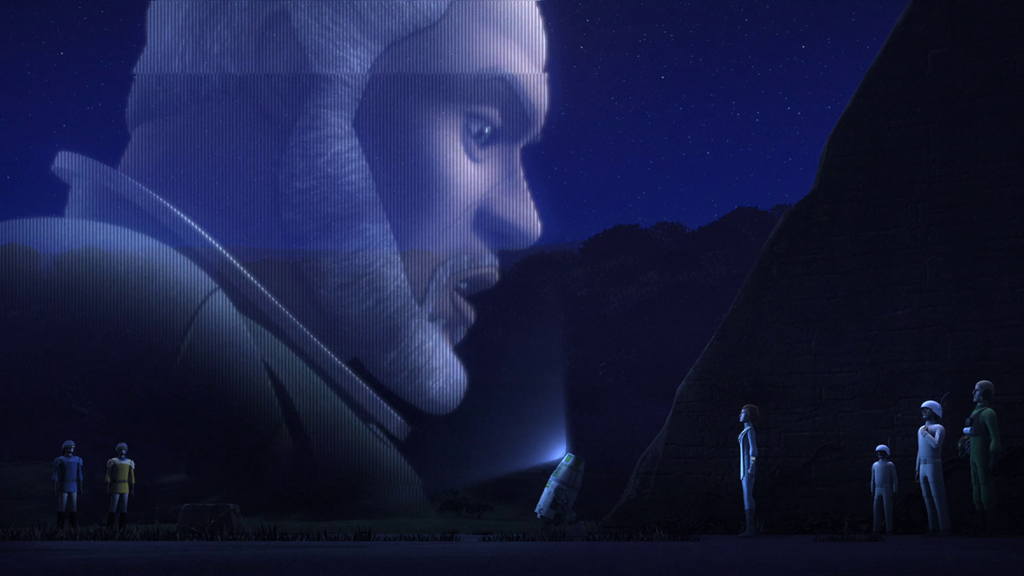 Star Wars Rebels: Season 4 Episode 3: In the Name of the Rebellion part 1

What is it ? : Kanan, Ezra and Sabine are returning to the Rebels from their time on Mandalore, and arrive in the Yavin system, landing at the base at the Massassi Temples on Yavin IV. They are met by Zeb, who is happy to see them, and impressed by the quantity of Rebels massed here, although aware that this is still tiny compared to the might of the Empire.
Hera returns from a mission with her squadron of Y-Wings, which are damaged, and she needs to make an emergency landing. At a debriefing, they discover that the Empire has a new communications centre which is allowing them to react to things far faster. They come up with a plan to spike the centre, so they can monitor all Imperial communications rather than destroy it, using the Ghost to sneak past the Imperial sensors, and Ezra is upset that the Rebels are not planning to help Lothal, and that their plan does not hurt the Empire. Mon Mothma takes him aside and says that she too wants to liberate her homeworld, but if they help Lothal and Chanrilla, what of the hundreds of other worlds which need their help?
After the meeting, Hera expresses frustration to Kanan, that she too wants to hurt the Empire in revenge for what they did to her squadron, but they've got their orders. That evening outside the base, Ezra and Kanan meditate, and discuss Saw Gerrara, and how his tactics are effective against the Empire, but how it is how they fight which is also important, but Ezra is not convinced.
Nearby an Astromech droid begins projecting a large hologram of Saw, and he starts mocking the Rebels for their failures against the Empire, Mon Mothma tells him that if they stoop to his levels of torturing and killing prisoners for information, then they are no better than the Empire. Saw tells her that when she is defeated, at least she will be able to say that she played by the rules.
The Ghost travels to the Imperial communications centre, approaching it without being detected, and Ezra, Sabine and Chopper jump out at high altitude, with the plan of using their jets to safely land, however they can't use them until they are very low, or they risk detection.
They safely make it to the communications disk, which is a massive construction much like the one on Endor, although their arrival sends some distortion through the Imperial Sensors, they are not detected. They proceed to spike the Imperial communications, but are interrupted by the arrival of an Imperial Light Cruiser. Their tap interrupts the communications between the station and the ship, so to avoid their work being detected, Ezra pretends to be an Imperial officer asking the ship to return later. The commander of the vessel demands to know who he is speaking to, so Ezra bluffs that he is Commander Brom Titus, but unfortunately the ship is actually commanded by Commander Brom Titus. The station still trying to communicate with the ship alters the position of the communications dish, causing Sabine and Ezra to slide across it to the edge, where they are spotted by Titus and Ezra sheepishly waves to him.
The station orders Stormtroopers to deal with the intruders, and as the Ghost approaches to rescue Ezra, Sabine and Chopper, the Cruiser launches two Tie Defenders, causing Hera to abort the pickup to deal with the fighters.
She steers the Ghost in mist filled ravines, where Kanan helps her navigate, causing the Defenders to crash, but before she can return, and with Sabine and Ezra caught in a firefight with the Stormtroopers on the dish, another ship arrives firing on the cruiser.
After the Cruiser is damaged, the new ship a U-Wing, hovers over the dish and it's doors open revealing Saw Gerrera, he offers Ezra, Sabine and Chopper a lift, urging speed as he drops explosives onto the dish to destroy it.
As they leave the base, and explosions destroy not only the dish but the Light Cruiser as well, Hera demands that Saw return her people, but the arrival of a Star Destroyer forces the two ships to jump to hyperspace, and Hera tells Kanan she's not worried about where her friends are going, but who they are going with.

High Points : At the start of the episode they arrive at the Rebel base on Yavin IV which is an impressive location, the base on Atollon was a tiny supply station, but here they are rows of starfighters and seperate locations inside the Temples themselves, it's an interesting place and one which made me want to explore it, making it feel real.

The big action set piece of the episode is that on the communications dish itself, and the interesting fighting environment, as the dish turns and those fighting are left sliding across it's interior makes it a fascinating and exciting combat environment.

Low Points : The main sticking point for me is Ezra's worship of Saw Gerrera! Didn't we sort this out last time? When Ezra watch Saw threaten to take away the egg from a Geonosian, and when he happily discussed making the entire species extinct? I'm pretty sure at that time Ezra recognised that Saw was taking things too far, and that his way wasn't the right way of doing things.
But now, Ezra is hero worshipping Saw for getting things done, and needs to reminded of the fact that Saw is willing to go over the line.

So what do you really think ? : An enjoyable episode, but I found Saw's relationship with the Rebellion to be an odd one. While I can accept that there are Rebel cells, and that some of them are more willing to go over the line than others, I find it odd that they should taunt each other about it.
I can see that Saw feels underappreciated by the Rebellion, but what victories has his forces actually achieved? They've gained intelligence through their tactics, but we're never told or shown that they've destroyed any major Imperial targets or achieved any victories. Just last episode, the heroes destroyed a Star Destroyer, which is an impressive feat. Has Saw's tactics achieved any similar level of victory? We never find out, so have no information to find out if his tactics are justified, as we never find out if they achieve any results at all.
While you can make an excuse for torture if it saves lives, if it has no positive effects, then you're just torturing people for the shits and giggles.

Final Words : A decent episode, and for all my complaints about how Saw Gerrera is handled, Forest Whitaker is excellent as always, and gives the character a certain appeals which makes it easy to see why people would follow this man.