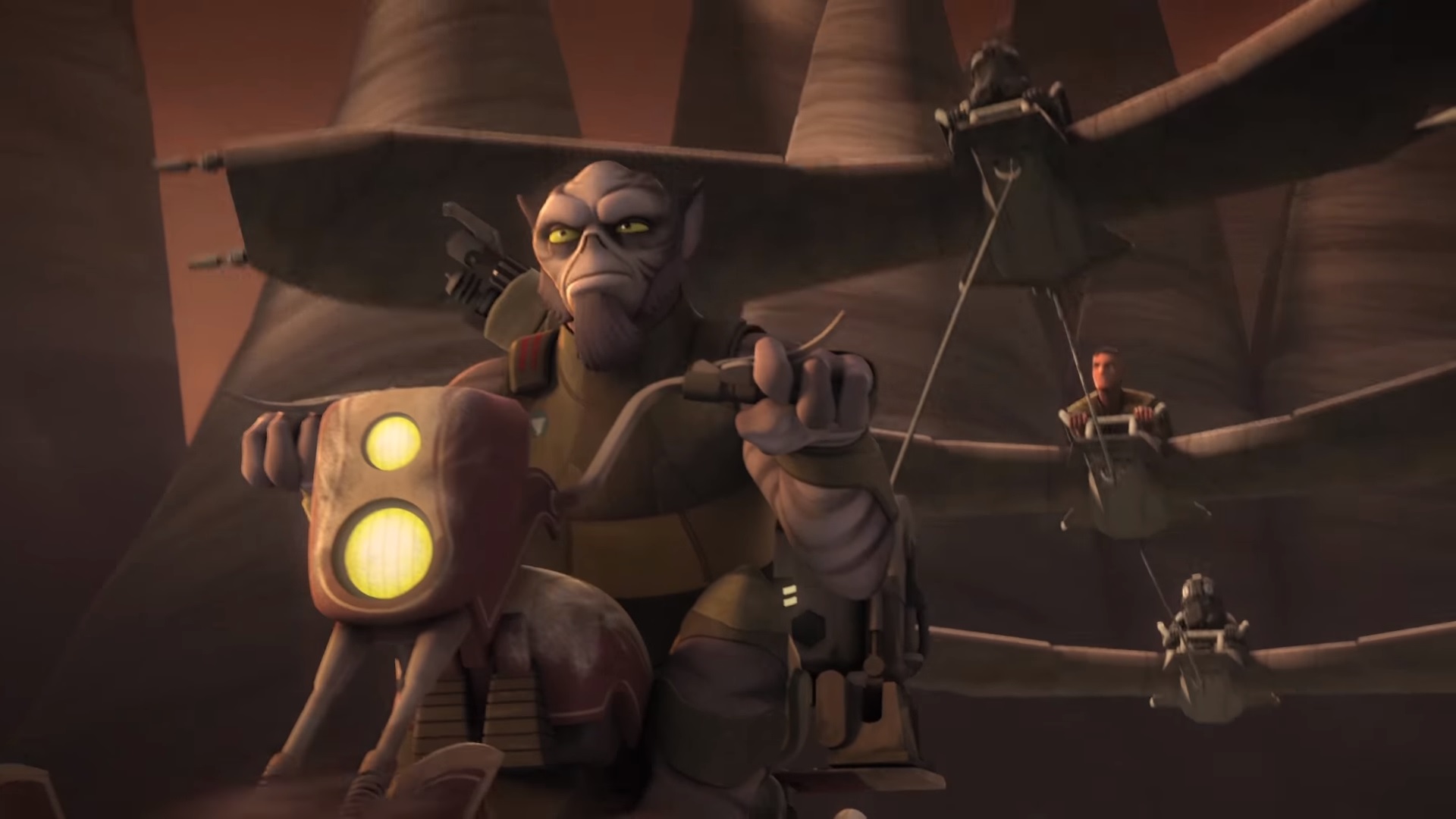 What is it ? : Kanan is meditating in the desert outside the Rebel camp, then goes to see Ezra, he asks Ezra to take command of the rescue of Hera, saying that his emotions might get in the way.
Meanwhile Hera is being tortured by Governor Pryce, Thrawn visits with her Kalikori, and tries to get her to discuss it, including part of it which alludes to a deceased brother. Hera responds that he is unworthy of holding it. Thrawn replies that the Kalikori's legacy ends with her and that it will be appreciated by its new owner. He leaves Governor Pryce, who has no appreciation of art, to torture Hera.
Ezra observes the Imperial Dome in Lothal City, using the force he detects Hera's location, and Sabine and Zeb discuss how to get to it, but the main problem is getting in. Ezra watches Loth Bat's swarming around the refuse ports, and he and Sabine come up with a plan to use bat shaped gliders to gain access.
Thrawn receives a communication from Tarkin that the Tie Defender project is likely to have funding withdrawn, as Orson Krennic's Star Dust project is having the funds diverted to it, Thrawn says that the Emperor promised support, and Tarkin unhappy with Krennic's "expenses and excuses", has arranged a meeting with the Emperor for Thrawn to argue his point, but he must leave for Coruscant immediately.
Finishing the gliders, they get Kanan who has shaved his beard off and cut his hair, losing the pony tail he has always had, then Kanan, Ezra and Sabine are towed by Zeb and Chopper on a speeder bike to give the gliders sufficient speed to launch, and with Ezra and Sabine disguised as Imperial Pilots, they glide into the city, setting down on the roof of the Imperial facility, unseen.
Ezra and Sabine set off to acquire a vehicle to escape in, while Kanan climbs down the outside of the building to where Hera is being held.
With Hera unwilling to answer questions, Pryce brings in an Interrogator Droid and injects her with truth serum, and under the effects of which she glimpses Kanan climbing down outside the window and tells Pryce that Kanan is coming for her, but Pryce misses Kanan and thinks that Hera is just hallucinating under the effects of the drug. Rukh arrives with news that he can smell the Rebels in the base, and he and Pryce leave the room to discuss.
Kanan enters the room from below, cutting his way in with his lightsaber, causing the guards and droid to drop to the streets far below. Hera and Kanan are reunited, and under the effects of the Truth Drug, Hera tells Kanan she hates his hair. They climb up the outside of the building, back to the gliders, and await pick up by Ezra and Sabine, but Rukh clambers up after them, and after a fight, the two flee aboard one of the gliders.
Ezra and Sabine, steal an Imperial Patrol Transport, and after dealing with the Stormtroopers aboard it, head out following Hera and Kanan who are under fire.
With their glider damaged, they set down at the Imperial fuel depot, and climb up onto the central tank to await pick up. Hera finally tells Kanan that she loves him and the two kiss passionately as Sabine and Ezra arrive, allowing them to board the transport.
But Pryce aboard an AT-AT, orders it to fire on the fuel tank, causing the tank to rupture and the fuel to catch fire causing an enormous fireball.
Kanan leaps from the transport, and uses the force to hold the flames at bay, but when Hera tries to follow him he pushes her back into the transport using the force, then shoves the transport out of the blast as the flames consume him in a titanic explosion that destroys the entire fuel depot. In their last moments, Kanan looks at Hera and Ezra, his eyes restored to sight for a few moments before he is swallowed by the explosion.

High Points : Well, obviously the moment in this episode is Kanan's death. While there are numerous great moments throughout, from the Stormtroopers discussing the relative dangers of Loth Cats and Loth Bats (obviously a call back to the Stormtroopers attacked by Loth Cats back in Flight of the Defender), to the romantic moments between Hera and Kanan. But all of this is eclipsed by the sacrifice of Kanan on top of the exploding fuel tanks.
It's stunning as he holds back the fire, using the force to push his friends and his love to safety from the explosion. Heartbreaking as the love affair between Hera and Kanan which has been obvious since the very beginning of the series.

Low Points : If I have any complaint about this episode, it is that it's over too quickly, not only do we have the break in to rescue Hera, we're suddenly confronted with Thrawn being summoned to Coruscant without any background really being introduced, we've got an all to short face off between Rukh and Kanan, and then the death of Kanan. So much happens, that almost none of it is given enough space, and it feels a little rushed. But that also adds to the story, as Kanan's death just happened suddenly, and he is ripped from the series, leaving us as stunned as the characters.

So what do you really think ? : On initially watching Rebels, I was always aware that things didn't look good for Kanan from the start. It's established canon that Luke is the Last of the Jedi by the time of the original trilogy, which didn't bode well for Kanan. At the start we had the excuse that he wasn't a full Jedi, being The Last Padawan, might have protected him, but in season 2 he is promoted to full Jedi by the spirit of the Grand Inquisitor, so he was straight back into the firing line.
During season 3, Bendu turned up, and I thought that perhaps Kanan and Ezra would become students of his version of the force, becoming other Bendu rather than Jedi, and be saved that way, but the storyline with Bendu went another way, so once again Kanan looked to me to be doomed.
So we reach this episode, and we discover why Kanan isn't a Jedi by the time of A New Hope, and it indeed doesn't end well for Kanan. We've had a bit of a rushed storyline about his true name, Kaleb Dume, which I found a little confusing when introduced by the Loth Wolves, as I kept thinking they were saying "Doom", which still didn't bode well for Kanan (or indeed Ezra).
The death of Kanan is absolutely perfect for putting this series within established canon, but is a sad moment, as he really was the reluctant hero. Not wanting to be part of the Galactic Civil War, but going along with Hera due to his love for her. His only desire was for the two of them to be together, and the snatched moments we glimpsed clearly showed why the two should be together, always having each others backs and supporting one another, while not always agreeing with one another, the trust and love was always apparent, and how this will effect Hera remains to be seen.

Final Words : I actually avoided reviewing this episode by one day, as not watching made Kanan live for one more day, I've seen this episode recently (it was only broadcast earlier this year), so knew exactly what happens, but somehow holding off watching it was staving off Kanan's demise, which yesterday I really couldn't face.
Kanan was an amazing character, and his time too short (indeed something which can be said for the Rebels series as a whole), and while we've still got a half dozen episodes to go, I can feel a gaping chasm in the series.
While Ezra is, and always has been the protagonist of the show, he always has shared that spotlight with Kanan, his teacher and constant friend. And now he stands alone, with Kanan gone, Ezra takes a greater leadership role in the group, something he still seems very young, and very unprepared for. He's still surrounded by friends, but the weight of the liberation of Lothal now rests squarely on his shoulders.
We've not long left on our journey with the Spectre's, but there's a lot of distance to travel to get to the end.