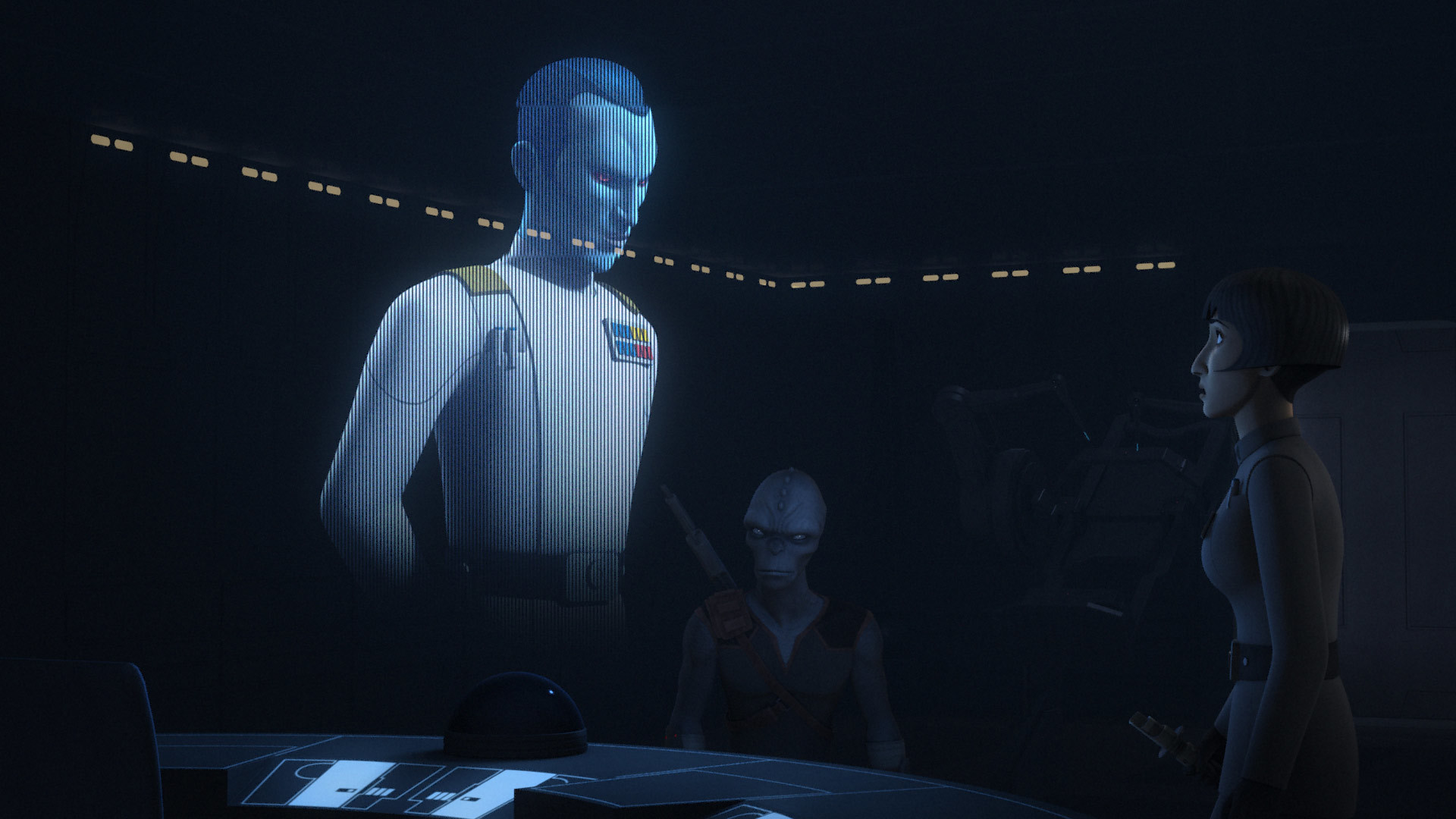 What is it ? : The episode picks up almost immediately after the last, Ezra, Hera and Sabine return to the Rebel Camp, where Zeb asks after Kanan. Ezra tells him that he is gone, but Zeb cannot comprehend, forcing Ezra to shout it at him that Kanan will never be back. Chopper comforts the stunned Hera, who grieves about having waited so long to tell him her love.
Back in Lothal City, an Imperial officer informs Governor Pryce that a stolen Imperial Gunship escaped, but that Kanan was killed, handing her Kanan's lightsaber. To distract from the loss of the fuel depot, she orders that a parade be organised to celebrate the destruction of the Rebel leadership.
Sabine and Zeb decide that the Empire must be punished, and depart on speeder bikes, Ryder and the remaining Rebels push for what happens next, but Hera and Ezra are in no condition to hand out orders, but Ryder pushes Ezra saying they don't have time to grieve Kanan.
At the Imperial Complex, Governor Pryce and Rukh are communicating the news to Grand Admiral Thrawn, who is not distracted by it at all, telling Pryce that the loss of the fuel depot has shut down the Tie Defender factories, and her victory has completed Kanan's mission, and that he will deal with her when he returns. He also tells Rukh that the Rebels will strike recklessly, and he should be prepared to take advantage.
Sabine and Zeb ambush a lone Imperial Scout, using the computer in his speeder bike to tap into the Imperial network, discovering the reason that the factories have shut down, and that the workers have not left their positions for the parade, but instead because the factories are out of fuel.
Ezra sits outside the Rebel base where he sees a Loth Wolf, and is herded by them away from the base, being knocked unconscious by them.
Rukh arrives at the site of the Imperial Scouts ambush, and Stormtroopers with him discover Sabine's tampering with the bike, but do not notice the explosives she has planted, being caught in the explosion as it goes off. Zeb and Sabine watch from a distance, but are spotted by Rukh who chases them on his speeder bike, so they lure him into a trap.
Back the Rebel camp, Hera examines the ancient cave paintings in the chamber where Kanan's mask and hair cuttings still sit from his departure to rescue her, she tells Chopper how even in the middle of everything Kanan knew what was important to her, rescuing her Kalikori, and she decides that he is important to her family, so will be incorporated into it's design.
Ezra awakens lost in the wilderness, using the childrens rhyme, "Loth-rat, Loth-cat, Loth-wolf run, pick a path and all is done," to find his way, but is confronted by the Loth Wolves again, the largest of which says the word "Dume" again. Ezra tells it that was the name of his master, and in a low guttural voice it questions why he was running, to which he tells it that he was being chased, before revealing that he is afraid and that he feels lost without his master. The wolf tells him they must fight together and gives him a stone from the Lothal Jedi Temple.
After Zeb lures Rukh into a fight, Sabine ambushes the Noghri from behind, but he activates a stealth field fading from their vision and easily gaining the upper hand. After a prolonged fight, Sabine uses a paint grenade against him, and Zeb beats him into unconsciousness, continuing to beat him until Sabine calms him down and stops him from killing Rukh.
Ezra continues to speak to the "Dume" wolf, which tells him the Lothal Jedi Temple is in danger, and that it contains destruction. The Loth-wolf tells him to restore the past and redeem the future. Dume then seemingly devours Ezra. Ezra wakes up and yells for Kanan. Then, he realizes that heĂ˘â‚¬â„˘s been dreaming, but notices that the Jedi key stone is laying at his feet.
Hera finishes her work, telling Chopper that she misses Kanan for finding answers in the most unexpected ways, and Sabine and Zeb return with the news that Kanan's death has meant the success of the Rebel mission and the factories have stopped production of the Tie Defenders. Hera is emboldened by the news and says that they can still beat the Empire. Finally, Ezra returns and announces that their next mission is to save the Lothal Jedi temple.

High Points : A difficult episode to rate, as although the action between Rukh, Zeb and Sabine is brilliantly done, with Rukh's stealth being extremely well realised, and Sabines solution being an obvious but brilliant option. But perhaps the best element of the episode is the fact that the series is giving us almost an entire episode to grieve for Kanan along with the characters.

Low Points : Likewise, while feeling bad about elements of this episode is their entire point, it's not something which can be criticized, as we're feeling the shock of the situation along with the characters.
In fact the only element which feels slightly out of place is Ryder pushing the main characters for their next plan while they're still breaking the news of Kanan's death. Even if Kanan hadn't died, the characters would be returning from a dangerous mission, tired and needing a rest. Everyone else in the camp has just been sitting around waiting for them. How about Ryder, the leader of Lothal, and leader of this Rebel cell until the heroes arrived, coming up with a plan. How about it, Ryder, how about you do some of the work?

So what do you really think ? : Another brilliant episode, with well done action and real movement forwards with the plot. Ezra has discovered the real danger behind the Empires occupation of Lothal, which they were warned of before. The Tie Defender factories are only a distraction from what they're really up to, and it involves the Lothal Jedi Temple.

Final Words : We've lost Kanan, and we're only a handful of episodes from the series climax. It feels like things are rushing along almost out of control, but it's one hell of an entertaining ride, and we've yet to discover the nature of the danger contained inside the Jedi Temple.