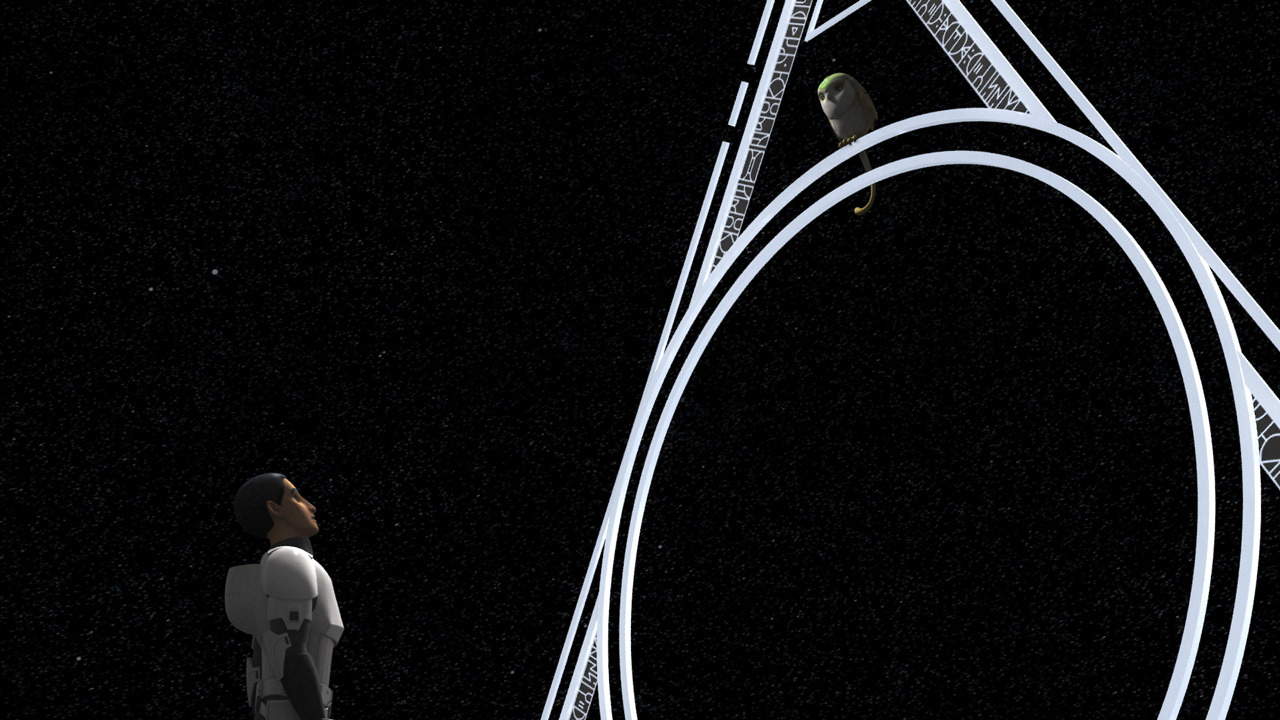 What is it ? : Following on straight from the last episode, Ezra stumbles through the portal into a dark place, with stars visible all around, bridges of light link portals together, all of them very much like the one that he just passed through. As he explores, his footsteps cause ripples of light in the floor of the bridges, and he hears voices around him, Qui-Gon Jinn, Yoda, Obi-Wan, Kanan and Leia are among those he hears. He shouts out for Obi-Wan and Yoda, but gets no response.
Meanwhile, Sabine is being interrogated by Minister Hydan, who tries to keep things light and a gentle discussion of art, but when Sabine refuses to co-operate he brings in Death Troopers to beat him.
Outside the Imperial camp, Hera, Chopper and Zeb begin planning on rescuing Sabine, watching where she has been taken.
Inside the World Between Worlds, Ezra spots a Convor, and recognises it from Malachor and other encounters with Ahsoka Tano, he looks through the portal it is perched on, and sees Ahsoka's fight with Darth Vader on Malachor. He sees the door closing with Kanan and him on the other side, sealing the two opponents in, and as he watches Darth Vader moves in for a fatal strike. So Ezra reaches through and plucks Ahsoka from her timestream, and Vader falls as the building crumbles around him.
Sabine and Minister Hydan, and the begin to decode the symbols, as Hydan discloses that Ezra has opened the way which the Emperor can now exploit to access all time and space. As they talk Sabine realises that they used the Daughter to open the portal, so using the Son they can seal it once more.
Ezra and Ahsoka awaken from the shock of pulling her from her timestream, and she quickly recognises that she has travelled through time, with Ezra telling her she has missed a lot including the death of Kanan. Ezra decides that since the Dume Wolf led him here, and he can rescue people from time, that he will be able to find and portal which leads to Kanan's final moments and pluck him from certain death as well. He rushes off with Ahsoka following, and comes to a portal where he can see Kanan. Ahsoka urges him not to interfere, Kanan's last moments were saving Ezra and Hera, and removing him from that moment would mean that the two would perish. Ezra says she doesn't know what she's asking of him, but she tells him that she does, she couldn't save her master either.
As Sabine and Hydan talk, she notices vibrations, and apologises to Hydan for the mess, he is unsure what she means, when the entire cabin they are in tips on it's side as Hera and Zeb mount a rescue. Sabine rejoins her friends and they fight their way to the portal, while Chopper steals one of the large mining machines the Empire has been using on the Jedi Temples remains.
Back inside the portal, Ezra expresses how everyone will be glad to see Ahsoka, but she tells him that she can't go, that she must return to her own time. But before they can act, one of the portals reveals the Emperor on the other side, using Sith Sorcery to force his way into the World Between Worlds, saying that Ezra and Ahsoka are now his.
They flee, but the Emperor projects fire into the World Between Worlds which grabs Ezra and drags him towards the Emperor. Ahsoka leaps into it's path, slashing it with her lightsabers, freeing Ezra, and the two flee. They take separate paths, with Ezra asking Ahsoka to find him when she gets back, which she promises to. Ahsoka leaps through her portal, emerging into the ruins of the Malachor temple, mere minutes after it's explosion, but having survived her encounter with Vader and the following explosion. Ezra is chased by the fire once again, leaping through his portal which acts as a barrier against the flames.
Emerging back at the Jedi Temple, Ezra asks Sabine how to close the portal and she explains, so Zeb holds Ezra aloft so her can activate the image of the Son.
The portal closes, and as the images of the Father, Son and Daughter animate, the wolves which were forming the portal, return to their places in the original image.
Ezra collapses into unconsciousness with the strain, and the group carry him aboard Choppers stolen mining machine, and they flee the camp. Minister Hydan tries to touch the images of the Father, Son and Daughter to stop the process of closing, but is consumed by energy as the image of the Father brings his hands together, sealing the World Between Worlds.
The blast of energy consumes the camp, and the stolen mining machine flees barely ahead of it, just making it out safely. Ezra begins to awaken, heading Kanans voice, "The Force will be with you, Always", and joins the group outside.
The massive hole which had been dug by the Empire to get at the roots of the Jedi Temple is gone, as is any sign of the temple itself except the markings on the ground where once Ezra and Kanan stood to open the Temple. He confirms to Hera that Kanan is "really gone" but not before teaching him one last lesson. For the final time he sees the white loth-wolf and says "Goodbye Kanan" before returning to the driller.

High Points : Wow.
That was epic.
And we discover the true purpose of the Empire on Lothal, that the Tie Defender factory is inconsequential, and that the Emperor wanted access to the portal in Lothal's Jedi Temple, once built by the Force Wielders of Mortis, which accesses the World Between Worlds, and through that, all time and space.
There have been clues here and there through the series, so it doesn't seem like a total surprise, but it does seem like this comes out of nowhere. The episode is a rush, with so much happening, so much story, so much action, as I've already said, it is Epic.

Everything else I say about the episode seems to pale in comparison to the main revelations, but we've got the return of Ahsoka, and we discover how she survived her encounter with Vader. We've got Ezra struggling with, but making the right decision to not save Kanan and destroy the timeline. We've got an encounter between our heroes and The Emperor himself. And we've got some amazingly good dialogue between Sabine and Minister Hydan (the spectacular Malcolm McDowell), as she keeps bringing up the fact that she is smarter than him, a fact he cannot refute as he requires her knowledge about the portal.
While I'm not sure that this episode is quite as stunning as Twilight of the Apprentice, or Twin Suns, it is definitely up there, and with some great actions scenes as well.

Low Points : My only criticism is one I've touched on above, that while there are threads leading here, about the importance of the Jedi Temple on Lothal, about the Emperors secret plans for the world, about the Loth Wolves, White Loth Cat and the Convor and their connection to the Force and to the heroes. We've even got threads leading back as far as the Mortis episodes of The Clone Wars series.
But despite all these hanging threads, the World Between Worlds does seem to come out of nowhere. There's no hints of time travel before now, there's no hints (apart from the Loth Wolves natural ability) of being able to walk between worlds and times. I wonder if, because Rebels was given a final season to finish off, that this is a plot line which should have been left to grow for a season or two more, but ended up being rushed.
But whatever the reason, while it does feel epic, it does feel somewhat rushed as a lot of storyline and ideas are dumped on us all at once.

So what do you really think ? : How many times can I say wow.
This episode really established Rebels with it's own destiny, although Lothal remains to be liberated, and Thrawn and the other bad guy's to be defeated, the heroes have just saved the galaxy. I'm just a little worried that we've just blown up the Death Star, but have a lot of run time to go, that the epic climax has occurred, but we've got so many plot threads to tie up before we're done.

Final Words : I'm still stunned from rewatching this episode, but I'm starting to grieve Rebels already. There are 3 episodes to go, and I want them to last forever. Rebels has proven itself to be such an amazing series, capable of Epic storylines and humour. I've grown to love these characters, all of them, and while Hera is probably my favourite, I've got to talk about the way Ezra has grown during the series, how great Sabine is, and Zeb has been a solid character throughout (I'm a little concerned they completed his character journey really soon in the series, with little character growth since season 2). Chopper, who annoyed me so much in the early episodes, has grown on me, especially when you learn to decipher his speech and can work out what he's saying.
I don't want to see these characters to go, I want to see more of them. But alas, 3 episodes is all we've got (unless their brief appearances in Forces of Destiny count), so I'd better just enjoy their final few stories, before I lament what we've lost (I'm looking at you Resistance, it's your fault).