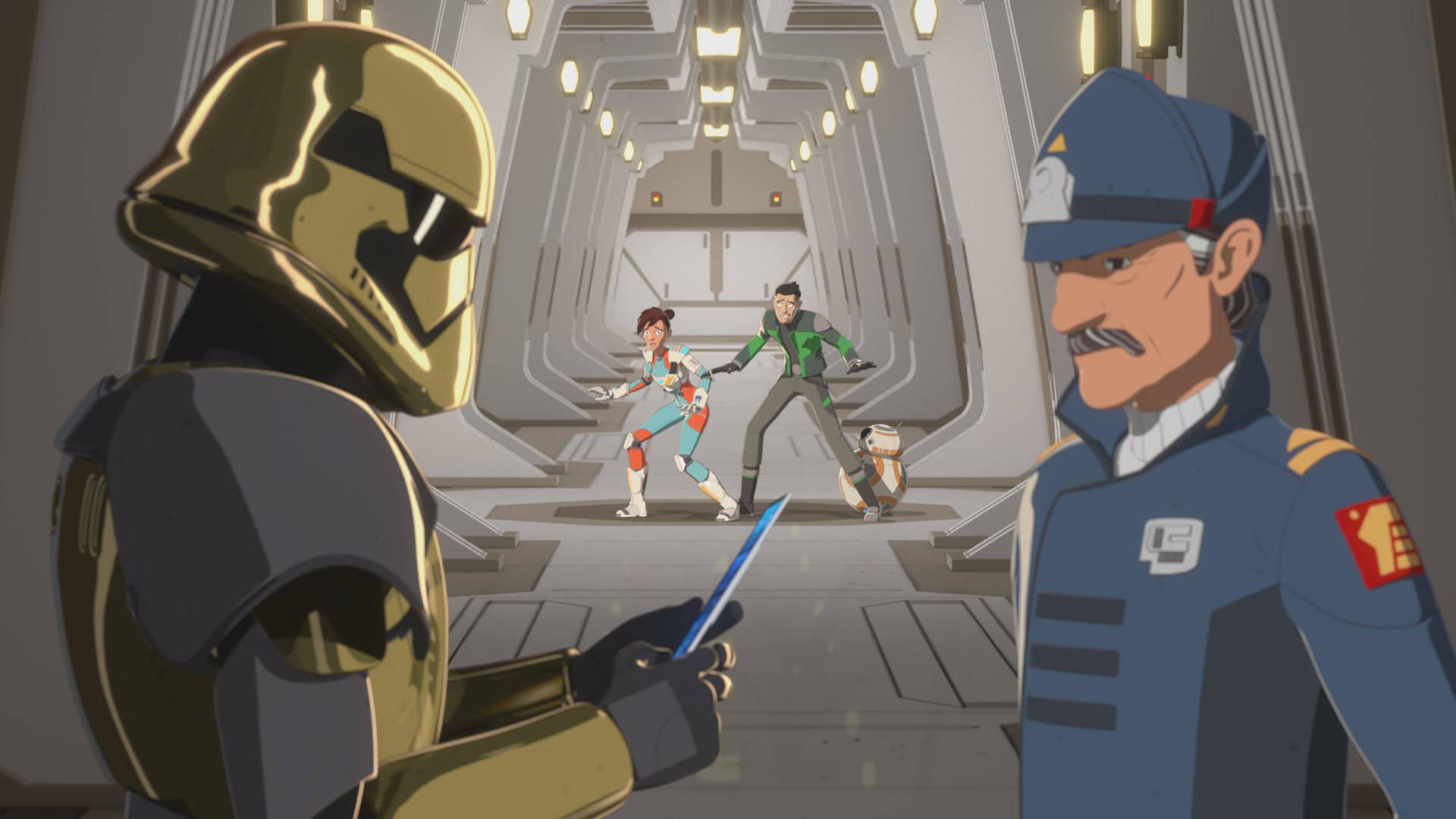 What is it ? : The episode begins with Torra playing a flight simulator holo game, she has been restricted to her quarters by her father while he works out the security agreement with the First Order, she sneaks out of her quarters to explore the market place.
Meanwhile, Kaz wants to find out what's happening with the deal that Captain Doza is making with the First Order, so attempts to sneak into the tower, meeting Torra as she sneaks out.
They spend some time in the market, but everyone recognises Torra and begin harassing her about what's happening to protect the station against the pirates, so the pair go back into the tower, and spend some time in the racers lounge, where they encounter Jace Rucklin.
He is still bitter about losing his racer, and blame Kaz, having to work as a bartender here to try to earn enough to buy a new racer.
They head back to Torra's quarters to play video games they witness Captain Doza making a deal with Pyre of the First Order, but Kaz has to hide when Captain Doza's droid comes to check on Torra. Sneaking back out of the tower he detours through the Captains office to copy the agreement between Doza and the First Order, but is seen by Jace, who informs on him.
Hearing the captain return to his office, Kaz hides in a cupboard, discovering an old Imperial officers uniform stored there, but is not discovered when Torra comes to speak with her father.
Kaz discovers that Torra did this on purpose to help him escape, and she helps him exit the tower through the Trash Compactor, where they are nearly killed by the lasers which cut up the trash.
Before they part, Torra questions Kaz on whether he is a spy, revealing that her father knows he was once a New Republic pilot, but Kaz claims to have quit the New Republic because of his desire to become a racer.
With the First Order now departed, Captain Doza visits his daughter, offering to take her out for a hover cruise, and as she prepares to leave she wonders who Kaz really is.

High Points : Wow, this episode is so much better than everything which has come before it, we've actually got a detailed and interesting plot.
Perhaps the feature which most sells the episode, is one I've been complaining about since this series started, Kaz is treated like he is competent and capable. He manipulates Torra based on their mutual love of flying and video games, exploiting the blossoming friendship to gain access to the tower and to continue his mission. This actually is a joy to watch, as he avoids making himself foolish, and ovoids being insulted by everyone around him, it's amazing what a difference the main character being likable makes to a story.

Low Points : Firstly, I must comment on the video games that they play in this episode, wow, they're really simplistic. While I can see the logic that the writers have followed to create this game, the rudimentary graphics are somewhat reminiscent of the targeting computers on X-Wings and Tie Fighters, but they do appear to be around SNES level quality wise. in fact, I think Star Fox on the SNES is actually more advanced than what they play.

Secondly, this is a symbol of the lack of care and attention that this show is getting, and is suffering from. When Kaz and BB-8 are going to sneak into the tower, BB-8 rolls up to the door where next to it is a computer interface for him to plug into. Now BB-8 is much smaller than R2-D2, so I noticed that the terminal is much lower on the wall than then appeared in the movies, as BB-8 just extends his data probe and plugs into the socket.
Once the door is open, and Torra emerges, we see BB-8 still standing next to the terminal, which is now mounted over the top of his head, at a height more suited to R2-D2, but one that BB-8 would have problems reaching. Now, either they've invented moving terminal sockets, so Astromechs of different sizes can all connect to them, or the animators just didn't care enough to make the height of this consistent.
While it's only a little thing, it jerks you out of the series through just a lack of care and attention.

Thirdly, I'm confused by Captain Doza's parenting skills. Torra is one of the Ace's on the station, flying her fighter in defence of the station and into combat on a semi-regular basis. As well as taking part in races where they perform death defying stunts (like last episodes unpowered dives towards the surface from orbit). But he doesn't trust her to walk the market on his own station alone, or even walk the corridors of his secured tower while the First Order are visiting. Now is she an Ace, trusted in combat, or is she a little girl to be coddled and protected? Or is he only protecting her in this episode because it's required by the plot?

So what do you really think ? : I have to mention Pyre's shiny crotch. The First Order returning villain this episode is Pyre, who wears a set of gold plated First Order Stormtrooper armour, and I found the way the light reflects off his crotch armour to be hypnotic and incredibly distracting. The animators have done a great job of creating the reflections off the metallic gold armour, but there's just something about his crotch guard which is just too shiny.
I must also ask if we're ever going to get some backstory on why he has gold armour? With Captain Phasma, we get some backstory where her armour is plated with chromium taken from a Naboo Starship, because the First Order follows Palpatines lead, and he was from Naboo. I vaguely remember something about her taking the metal from an old shuttle of Palpatines. Plus it's starship hull armour, so better than normal Stormtrooper armour.
But with Pyre, there's not been a hint of anything yet, unless we're now discovering what happened to C-3PO's original gold arm?

Final Words : This was definitely a better episode, and it actually seemed to last longer than usual as well. If they can have stories of this standard, then Resistance isn't going to be a complete disaster after all.