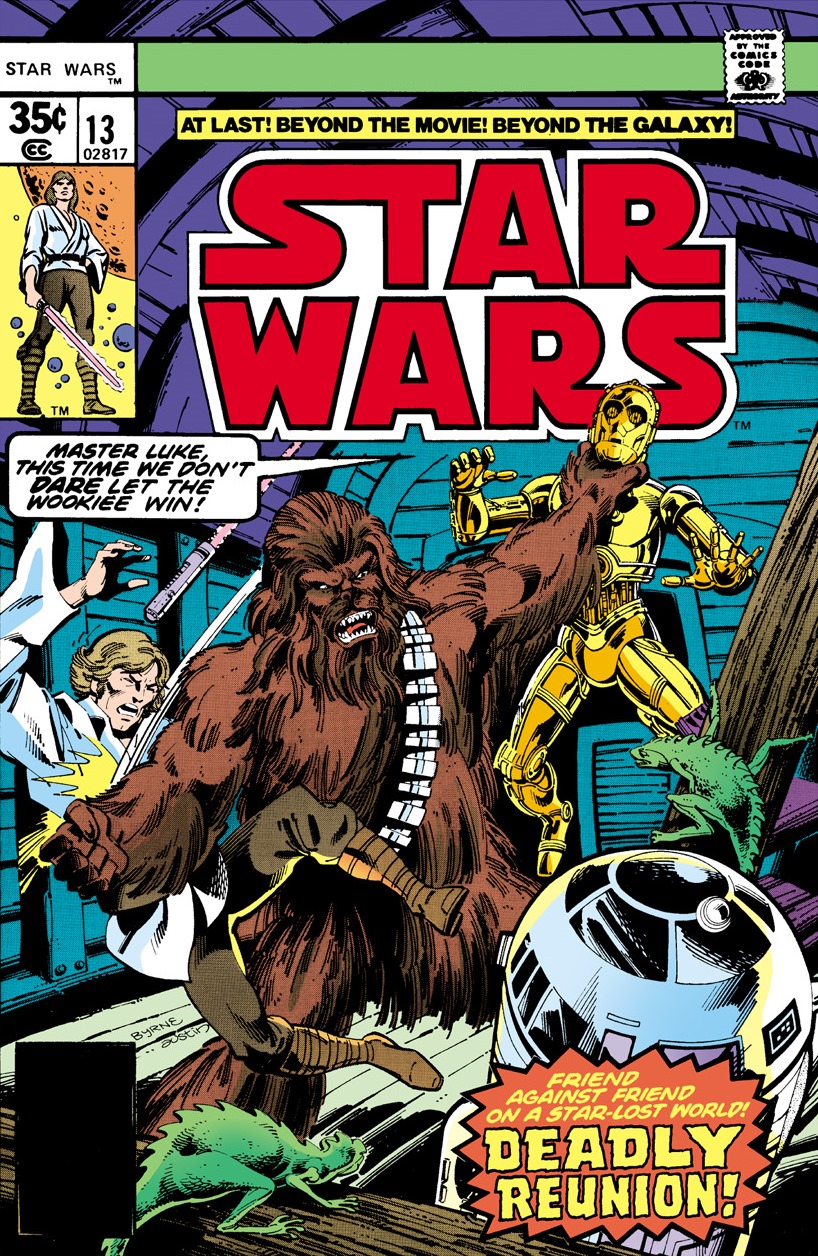 What is it ? : Luke has arrived on the Great Ship, and is talking to Governor Quarg, who informs him that it is the law that all newcomers must be put to death and all droids scrapped, but Luke demonstrates how useful R2-D2 is in maintaining one of the Skimmers. Although it would take days to repair it fully, he has managed in the minutes available to get one of the skimmers that the inhabitants had discarded functioning again.
Governor Quarg decides if Luke can take the Skimmer out and demonstrate that it's useful again, then the Droids and Luke can live. Luke takes the skimmer out to sea to fire at a lump of driftwood, but the Master Machinesmith thinking he is going to be replaced has hidden himself aboard and ambushes Luke, who tumbles the Skimmer, smashing it up even more, but still manages to fire the weapons against the target proving his usefulness.
Quarg accepts Luke, and while the Droids are given a fish oil bath, he explains that the ship is infected by small lizards, and the inhabitants used to be from the Old Republic, they were raiders who lived by attacking spacecraft that passed through their system, destroying them and raiding their cargo and technology. But the Republic sent a Jedi Knight against them, and they were forced to flee aboard a damaged starship which crashed here.
Their ship floated on the sea, and the only resource they could get was floating wood which they used to convert the starship into the Great Ship they are now aboard. They began to use the sonic projectors they had used for raiding, to cause ships to crash here, providing more resources to try to repair their starship. However, the usage of the Sonic Jammers attracted the Sea Dragons which attacked them, and the engineers of the crashed starship recommended not using them any more. However the Governors ancestor refused, and the Engineers left and became the Dragon Lords, manipulating the Dragons using Sonic Staffs.
Meanwhile in orbit, Crimson Jacks Battlecruiser with Han and Leia aboard has come out of hyperspace above Drexel, seeing there is no land, therefore no where for a Rebel Treasury, Jack threatens Han. But as Han plays for time, the Great Ship is detected as a possible landmass, which Han and Leia claim is where the treasury is.
Governor Quarg detects the arrival of the Battlecruiser, so fires the Sonic Jammers at the large vessel, but it is so large that the Jammers are nearly at overload levels, and begin attracting a massive amount of sea dragons which can be seen gathering on the horizon.
As the Battlecruisers power fails and it begins crashing down towards Drexel, Han and Leia use the distraction to fight their way to the Falcon and launch. However their ship is also affected by the jamming, so it crash lands into the sea.
As the Raiders move out to scavenge the technology coming down from orbit, and the sea dragons move in, Luke sees the crashed Falcon, so take his skimmer and the Droids to it, but they are ambushed by an angry Chewbacca who thinks they are responsible for the crashing of the ship.

High Points : Again I'm actually impressed by how well the background story meshes with the Star Wars universe as it exists now, the story of raiders forced to run from a Jedi Knight and ending up crashing on a water world which forces them into a lower technological life, doesn't cause any problems fitting into the continuity now, and Quarg and his people could easily be written into any modern Star Wars tale or adventure without sticking out as an oddity.
Their culture of fearing those coming from space, and keeping to their old ways of raiding passing spacecraft for technology and supplies makes total sense, although the ease which Luke proves his usefulness does just seem a little convenient.

Low Points : Chewbacca being enraged and described as only being calmed down by someone who knew him, like Han Solo, does seem out of character for the honourable Wookiee first mate of the Falcon. They do have a tendency of making him not much more than a wild animal in these early stories, an angry pet only controllable by his master.


So what do you really think ? : Apart from their characterisation of Chewbacca being off, the story zips by nicely, and manages to pack in an astonishing amount of world building, from the way the Great ship came to be, their use of fish oils on the droids, the presence of the lizards aboard the ship, and all the history of their people, even down to them still using the same ways that they had before they came to Drexel. It all feels well crafted and it all makes a lot of sense, making the strange idea of Dragon Riders fighting against people with technology onboard a giant wooden sailing ship, actually make sense.

Final Words : I'm not entirely sure how long this storyline will continue for, from memory these stories never went on longer than a few issues, but the world building done here, and the fact that Crimson Jack has yet to join the conflict on Drexel, and we've not yet seen the Dragon Riders and anything from their point of view, makes this feel much, much larger than I would of expected of a tie in comic book of this era.