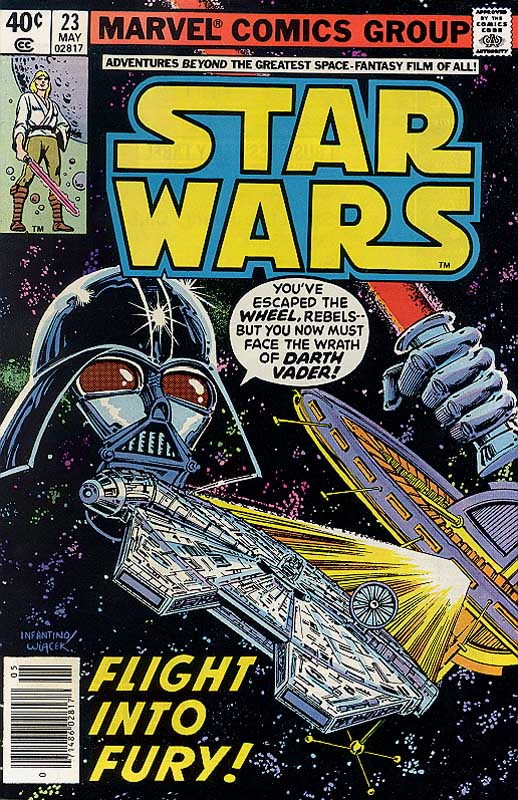 What is it ? : As per their agreement, Greyshade is letting Luke go, and going to reveal the Empires plot in exchange for Leia, and he is refueling his ship ready to depart and Luke and Leia passionately kiss goodbye.
As Chewbacca finishes off in the Arena, Han reveals to him that he is still alive, having concealed one of the shields in his shirt, which reflected the killing blast. He is relying on Chewbacca acting distraught, and stopping anyone from handling his "deceased" partner's body, allowing them to smuggle him back to the Falcon along with their rewards.
Strom stumbles into the Wheel still under the effects of the drugs Greyshade gave him, and raises the alert that Greyshade is working with the Rebels, ordering all Imperial personnel who are spending time on the wheel into action.
This causes Stormtroopers to attempt to stop Chewbacca leaving with the repulsor cart with Han and their treasure aboard it, Han leaps into action, and Chewbacca smashes the cart into the troopers, scattering their reward onto the deck, but allowing them to board the Falcon.
Greyshade orders Master Com to open the hangars to allow both ships to leave, only to be notified that his command of the station has been rescinded on Stroms orders, but due to their friendship he'll open Greyshades hangar. But Master Com is blasted by Stormtroopers who overhear him disobeying their orders before he can act.
Luke leads the defence of the hangar as Stormtroopers attack, displaying his willingness to sacrifice himself for Leia, displaying heroism that Greyshade finds lacking in himself.
Elsewhere in the station, R2-D2 has been carrying the recordings of Strom's activities, and is intercepted by another copy of Master Com, who reveals he deliberately performed actions to get the Empire to destroy him. As he would normally have to obey their orders, but they destroyed that body before they could force him to do anything he didn't want to. He broadcasts R2-D2's recording, which causes riots across the station, as the populace which were complying with the Imperial forces because of the Rebel threat they had been shown, reacts to discovering that not only were the profits being stolen, but the Rebel attacks had been staged.
Master Com, opens the shields to allow both the Falcon, and Greyshade's ship to leave, and jettisons R2 into space to be collected by the heroes.
Greyshade takes command of the defence of the Hangar, telling Luke and Leia to take his ship, remarking how he had always compared badly to people willing to sacrifice themselves like Luke or Han.
Strom leads an attack on the hangar, and Greyshade defends with a proton grenade, killing Strom and mortally wounding himself and Master Com, who he tells with his dying words that he's lucked out as a hero on his first attempt, but at least he's dying with a friend.
In space Luke and Leia are confronted by Darth Vader's Star Destroyer, which captures them in a tractor beam, drawing them in. However the Millenium Falcon swoops in blasting at the bridge of the Star Destroyer, causing Vader to recognise it as the ship which had blasted him during the Battle of Yavin, and he orders the Star Destroyer to attack the Falcon with all weapons, releasing Luke and Leia's ship.
Luke reaches out with the force, finding Vader's unprepared and unprotected mind, and pushes all of his raw emotions into Vader, all of the feelings of loss when he thought that Han was dead, all of the worry about his friend now. This distracts Vader long enough for the ship ships to jump to Hyperspace as Vader recovers but can only watch them depart.

High Points : Well the issue is definitely action packed, with a whole load of things happening, but apart from that there's not much else I can raise as high points of the issue.
I suppose Master Com tricking the Stormtroopers into blasting him before they can issue too many orders he'll be forced to obey is clever, knowing he'll just awaken in a new body physically out of their reach to issue orders to.
And Greyshade and Master Com's final moments, as Greyshade realises that this droid has been his only friend, are extremely well done.

Low Points : This issue however, is riddled with flaws, like Han's survival from the deathmatch, where we're now shown Han had hidden his shield inside his shirt before getting Chewie to blast him. Something we never saw last time, as well as Chewies blast now being reflected away by the shield as it had done previously, the shield just stopped the blast. Although faithful to Star Wars origin as a homage to the Saturday morning serials, with their cliffhanger's (which would always reshow the final scene of the last episode, but with an extra shot inserted to show how the hero survived), it's a cheap and annoying resolution.

While bundled up with his realisation that Master Com is his only friend, Greyshades redemption and attempt at heroism comes from nowhere. While the friendship plotline has been building for a couple of issues, Greyshade just decides this issue to sacrifice his life for these people he's just met, which feels clumsy, and just put in to remove Greyshade as the Wheel storyline is now over, instead of carrying him onto the next story.

I may have missed something between issues, but last I remember, R2-D2 was with C-3PO, Luke and Leia at the Hangar for Greyshade's Yacht. Then suddenly he's in a tunnel where he meets with Master Com! How did he get here? What's he doing here? I have no idea.
Now checking back to the previous issue, R2-D2 was with Luke when he starts the fight with Wheel Security at the Hangar, when Luke tells him to "Get out of here with that tape!", then we don't see him again until he meets with Master Com. So the story does match up, but it does feel a little bit of a surprise since we're not shown him leaving, or at any other point up until now.

Speaking of R2's location only being mentioned. Master Com launches R2 into space to allow the heroes to collect him, then he's aboard the Yacht to Luke, Leia and C-3PO, without us being shown him being collected, just a line of dialogue from C-3PO that "We have a most important pick up to make".
I know in the Galaxy Far Far Away, people tend to ignore droids, but now and here our writers shouldn't.

Finally I must comment on Luke's new found powers. He manages, at least temporarily to distract Vader with a blast of emotions. Now we could say this is because of the familial link between the two, but from the Luke Leia kiss, we can see the writers had no idea that Luke Leia and Vader were family at this point, so Luke just manages to summon up a new power from nowhere, which again just feels like a cheap way of getting them out of this situation.

So what do you really think ? : While I probably should have dropped it into Low Points of the issue, I'll just comment on Luke and Leia kissing passionately, described as "The Embrace is Clumsy, the Kiss Awkward, but as he watches from the Yacht's hatchway, Wheel Administrator Simon Greyshade senses feeling and emotion he can never know."
Which seems a little much for Brother and Sister . . .

Final Words : The issue makes a big point of Chewbacca losing his and Han's rewards for the Gladiatorial fights in their escape from the Wheel (the writers are keeping them poor so they can't afford to pay off Jabba and return to their normal lives), but I wonder if they'll ever mention the vast riches Luke and Leia have aboard Greyshade's yacht?
Strom raided the bank transfer from the Wheel to the banks, and Greyshade's men took raided Strom's ship and transferred that to Greyshade's Yacht in preparation for him leaving the Wheel aboard it. However, he allowed Luke and Leia to take the ship, meaning that all of that money is currently sitting in their cargo hold.
I wonder if the Writers will remember they've got it?