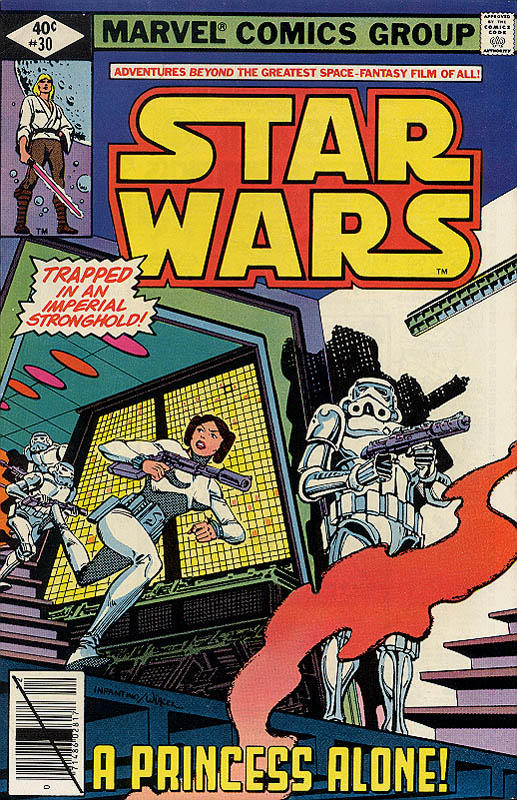 What is it ? : Princess Leia is on a mission to Metalorn, her pilot doesn't understand why the Rebellion is sending someone so important to an imperial controlled factory world, but she explains she is bringing something that a normal spy couldn't.
Meanwhile on the planets surface, a child has broken from the queue of people waiting to get breakfast, she is digging in the dirt, and when her mother comes to explain that they'll get in trouble, the child says that she has seeds from their food and wanted to plant them, they are caught by a Stormtrooper and sent on their way.
In the control centre of the Planet, Baron Orman Tagge has arrived to audit all of his companies projects after his failure at Yavin, the project here is sensors and control systems which detect all weapons on the planet, and while he is there they begin tracking that a Blaster Rifle has been taken from a Stormtrooper at the docking level.
The action cuts to Leia carrying a blaster rifle, and explains that she used sealant on the Stormtrooper helmet vents to knock him into unconsciousness, and she is staying ahead of patrols due to the sleep imprinting lessons she took during the journey giving her local knowledge.
She slips into an Ore Vat, and they track her blaster rifle setting up an ambush, only to discover she has ditched the weapon.
In the control centre, the commander notices that Orman Tagge has left, wondering if his encounter with Darth Vader has led to him being nervous around danger.
Leia arrives in the cafeteria, and speaks to a man she identifies as Arn Horada, one on her teachers when she was a child, she shares some information with him about the lies the Empire has been spreading about the destruction of Alderaan, and the death of her family, but she is interrupted by Orman Tagge.
Tagge used his system to identify her through her voiceprint, and then matched that with anyone on Metalorn who she may have known, so tracked her here.
They struggle, and Leia manages to knock him out and handcuff him to one of the chairs, then hide in the crowd with the child from earlier, pretending to be mother and child as Tagge reawakens, cuts himself free and races to the control room to attempt to track her further.
She thanks the child, and escapes from Metalorn using methods unseen, aboard a modified Cargo Orbiter which hyperspaces away.
Tagge and the Governor discuss executing Horada, but doing such would be an admission that the Rebellion is real and a danger. They decide to cover up the whole debacle, as informing the Emperor would put both their positions in danger.
Leia tells her pilot that her mission was a success is sowing the seeds of rebellion on Metalorn, and we see the child sneaking off once again to plant seed in the dirty of the sterile factory world.

High Points : There's not too much interesting here, although the concept is good enough. The Rebellions need to use Leia and a visible figurehead, revealing the lies about the destruction of Alderaan to provoke rebellion is a solid concept, and makes the perfect excuse as to why they can't keep her hidden away on the Rebel base.
Orman Tagge provides an intelligent foil here, and his systems seem efficient and useful, allowing the Empire to track enemies by their weapons is clever, and his deduction of Leia's identity and who she is there to visit is intelligent and makes him a credible threat.

Low Points : However, not a lot else makes sense here, and the issue doesn't feel very Star Wars to me.
Why does Leia's sleep imprinted knowledge about the layout of Metalorn make her superior to the Stormtroopers who are actually living there? And if it's better, why isn't the Empire using it? The entire concept of the Empire vs Rebellion is build on the idea of Technology vs Free thought.
Why are there no droids seen in this issue at all?
How does Leia actually escape?
In fact, how does their ship actually manage to land and Leia get into the factory, as apparently it's underground?

The story is just too full of holes to be truly enjoyable, since we're not really seeing the whole story, just a segment in the middle.

So what do you really think ? : Not one of the stronger issues, although as I said, the main concept is a valid one. But it's just not very well thought out, and while Tagge does act intelligently, why he rushes off to deal with a Rebel infiltrator himself to regain status lost by the failure of the Yavin blockade, rather than prove his systems work by sending Stormtroopers, and regaining status by working with them, I don't really know.

Final Words : Leia's first solo outing, and it's a bit of a washout, and the setting while interesting seems plucked from any generic sci-fi setting of the era.
Oh well, not every story can be a winner I suppose.