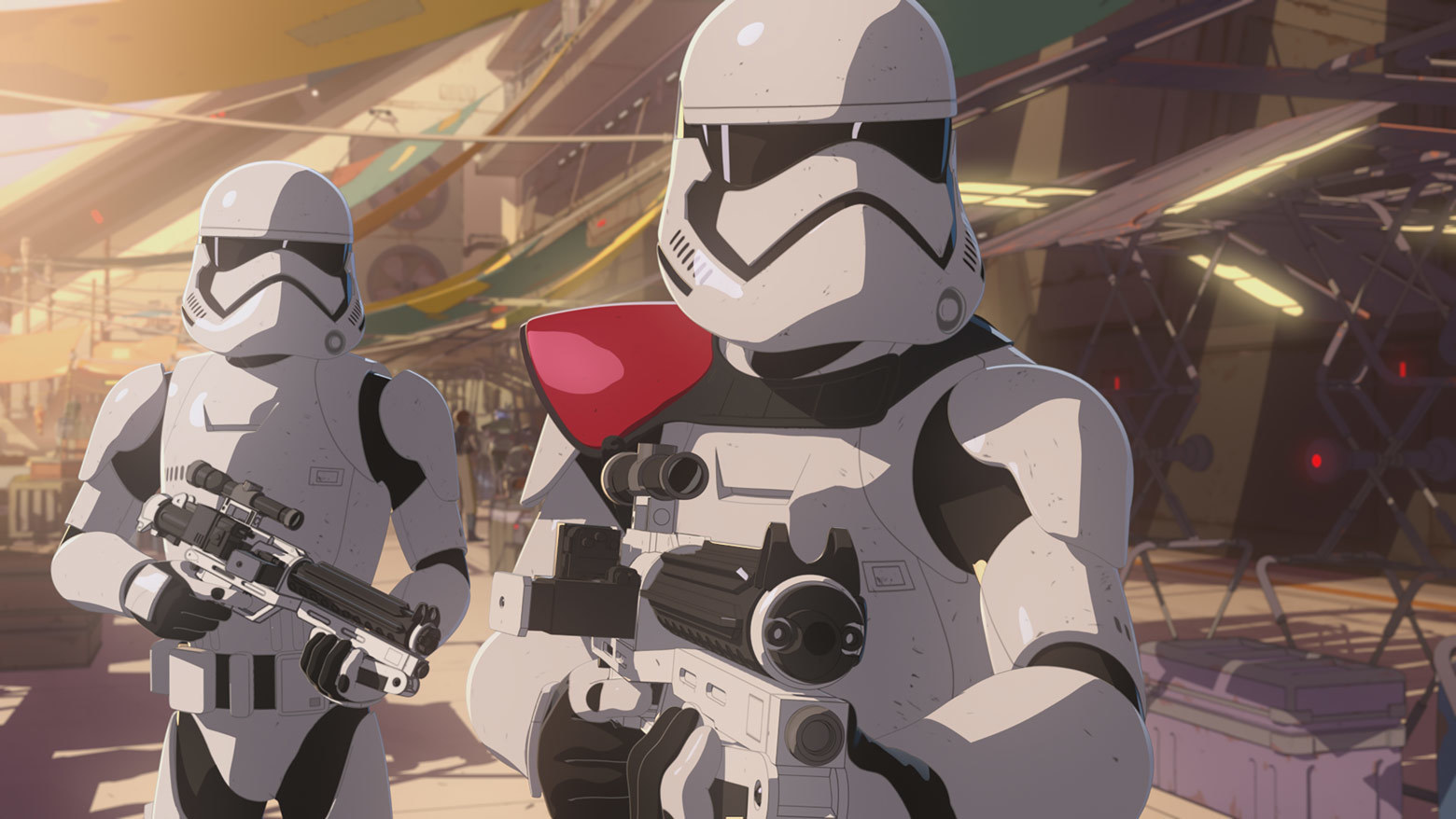 What is it ? : Kaz, Neeku and Tam are walking through the market and Kaz comments on the new First Order presence on the platform, he feels it's an occupation, while Tam is grateful for them as they rescued Torra from the pirates. The Stormtroopers begin interrogating a Rodian, and when Kaz intervenes, they accuse him of being a spy before becoming distracted as the Rodian finds his ID, and Kaz slips away.
Later at Yeagers the Stormtroopers turn up looking for Kaz since he interfered at the market, revealing that the spy they're looking for is the pirate one. But before they question him they are summoned away to deal with another situation.
Realising that the Stormtroopers are actually looking for Synara, Kaz heads down to the docks to warn her, after a close call due to his clumsiness he manages to let her know that the First Order is seeking her.
Kaz loads Synara into a crate and putting on a welding mask uses a hover cart to get her into one of the shuttles about to leave the station, but she sees Stormtroopers chasing him as he leaves, so follows them and disables them before he is caught, but by the time they return to the docking bay the shuttles have departed.
Seeking another way off the station they speak to Neeku, who tells them about the underwater escape pods, and they head down into the depths of the station after Neeku releases gas to stop pursuing Stormtrooper at risk to his own life when he stumbles into some crates.
They discover only one pod remaining, and Synara takes it, Kaz and Synara wish each goodbye, and by the time the Stormtroopers arrive, it is too late.
Synara's pod travels through the ocean past a giant sea creature, and she uses the transmitter aboard to arrange rescue by Kragan and his pirates who welcome her home.
Back at Yeagers workshop, Kaz tells Tam that Synara had to leave because of The First Order, but she doesn't understand saying that they are only here to protect the platform. Neeku arrives back, and tells Kaz the Stormtroopers didn't get a good look at him, and then collapses.

High Points : Well, we're actually getting some storyline here which is a definite improvement on the early parts of the series, but it's still so full of holes that it makes little sense. Commander Doza is accepting of the First Orders rescue of his daughter and although hesitant about their presence on the station, allows it because of the pirate menace. But this makes little sense since the First Order admitted responsibility for the kidnap in front of his daughter.

But it is interesting to see the wide acceptance of The First Order, because even though we know of them being evil, and would think because of their close relationship with the Empire, most people would think the same. In reality they offer stability, and the memory of the Empire that most people have must be of similar stability and order. People are willing to give up a few rights for protection, and it's a surprisingly adult message for a kids show.

Low Points : Kaz continues to be generally useless, knocking things over when sneaking, acting completely guilty when confronted about being a spy, but seeming to have a good heart.
In every other episode, it's been simple for the characters to jump on a speeder bike, or launch the fireball or a shuttle to get away from the station. Synara's everyday job seems to be going out to the ocean and salvaging wrecks from the sea bed. But in this episode, it's suddenly difficult for them to get away from the station, and we need the last Escape pod to get Synara away from the station.
It's not even as if she has to leave, Kaz has already had 2 people hidden away on the station for months, so I don't see why making that 3 would be terribly difficult.

So what do you really think ? : While moving the plot forwards and actually forming part of a cohesive overall plot for the series, this episode is dull. The action has no thrill to it, and apart from familiar faces, it doesn't really feel like Star Wars at all.

Final Words : Resistance continues to disappoint, and although it does seem to be making some progress towards fixing some of its flaws, there's still major problems with the series which need to be resolved before it can be considered a worthy part of the Star Wars canon.