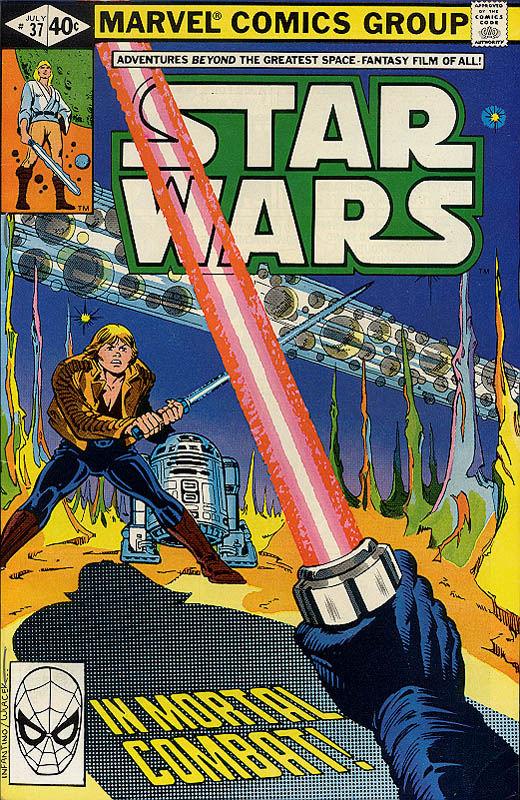 What is it ? : Luke and Darth Vader enter the Crystal Valley for their duel, and Domina Tagge muses to herself that she has dealt with both combatants as neither will survive to leave the valley.
Luke discovers the reason that the valley is so named is because Crystal spikes suddenly stab out of the ground caused by a chemical reaction with the heavy dew. He navigates the valley searching for Vader while avoiding and slashing at the crystals with his lightsaber.
Meanwhile Vader observes the MIllennium Falcon attempting to land in the valley, but cannot due to the crystal formations.
Aboard the Falcon, Han forces a heavy landing which causes everyone to lose their footing and allows Leia to grab Orman Tagges blaster, but he flees into the valley as they man their guns to deal with pursuing Tie Fighters from Vaders Star Destroyer.
One of the crystals erupts from the ground, nearly crushing Tagge, but is held away from him by Vader using the force, who declares that Tagge has one last purpose in this.
Luke continues searching the valley and finds Vader and they begin fighting, but R2 enters the valley to warn Luke that his sensors detect something odd. Luke reaches out with the force and feels fear in Vader, and that Luke's mind is being effected somehow. Confused by this, Luke is forced to slash at Vaders chest as Vader attack him hitting a mortal blow to his opponent, who collapses, revealing himself to be Orman Tagge. Vader departs in his Tie Fighter, while Luke makes his way out of the Valley, confronting Domina Tagge and meeting with his friends.
Domina Tagge swears vengeance on Luke because of the death of her brother, and reveals that her duplicity has been discovered and she has lost her role within the Order of the Sacred Circle.
Meanwhile, in the Drexel system, a vessel approaches the wreckage of Crimson Jacks Battlecruiser, it is Jabba the Hut and his men, having funded the work on the Battlecruiser he seeks revenge on whoever destroyed it, and Jabba reinstates the bounty on Han Solo, for the expense he has cost Jabba.
Han discovers this when he is attacked by a bounty hunter, so ends up returning for sanctuary with the Rebel Alliance.
Next time "The Empire Strikes Back", or maybe not . . . .

High Points : The strongest part of this issue falls on the very last page for me, having saved "Jabbas" life in a previous issue and gotten rid of the bounty on his head, the writers now find themselves having to restore it because we're about to head into The Empire Strikes Back, where the bounty is mentioned as still existing.
Now they could have just decided that Jabba was treacherous and hadn't cancelled the bounty, but instead they hook it back into the Drexel storyline with Crimson Jack, and make it about Han having wrecked the Battlecruiser Jack used, which was funded by Jabba.
I really liked this method of putting things back in place, and it actually hooks into The Empire Strikes Back pretty well, since Han's encounter with the Bounty Hunter could well be the one mentioned in the movie.

Low Points : I have to admit that the cause for the crystals in the valley is one of the most ridiculous things I have ever read, with them being caused by chemical reactions from the heavy dew.
We're not told that Domina has arranged for the duel to be held on a day when the dew is particularly heavy, or during the annual heavy dew day. Hell the fight doesn't even take place in the morning, the time of day most commonly associated with dews, heavy or otherwise. So we can only assume this is what the valley is like everyday, and if so why isn't it just solid crystal? Why haven't all of the crystals erupted because of the dew on previous days?
It's totally preposterous, and obviously just happening because the writers wanted a dangerous setting for the duel to take place in. And it doesn't really have any effect on the duel itself, only in the set up for the duel.

I must also ask why Vader uses the force to make Luke think that Orman Tagge is Vader? He doesn't use it as a distraction, to attack Luke while he's already fighting Tagge. After Luke has dealt with the disguised Tagge, Vader emerges, Luke runs away, and Vader gets in his Tie Fighter and flies off not even attempting to pursue Luke. The disguise isn't even used to cause Domina to hate Luke, as she already does, although it could possibly be because he told her Luke had already killed Orman and Silas, so she might otherwise ally herself with the Rebels.
Finally on this point, why does Luke run away? Last issue he was desperate to fight Vader, claiming that fighting him is the thing he wants most. Now, without so much as clashing their sabers, Luke sprints out of the valley. Why? what's changed? Is he too tired from fighting Orman? Has he had time to think about it and decided that fighting Vader isn't a good life choice?
We're not told, and it kind of ruins the tension when your hero triumphs by running away.

So what do you really think ? : With some great scenes, the issue is dragged down by a couple of bad concepts, and doesn't hold together particularly well. Orman gets written out without any further plot progression from him, although the Tagge family will return as we haven't seen the last of Domina.

Final Words : Well, the issue claims that "The Empire Strikes Back" begins next issue. But I know that's a lie, because we've got what is possibly my favourite story from the Marvel Comics next, "Riders in the Void".