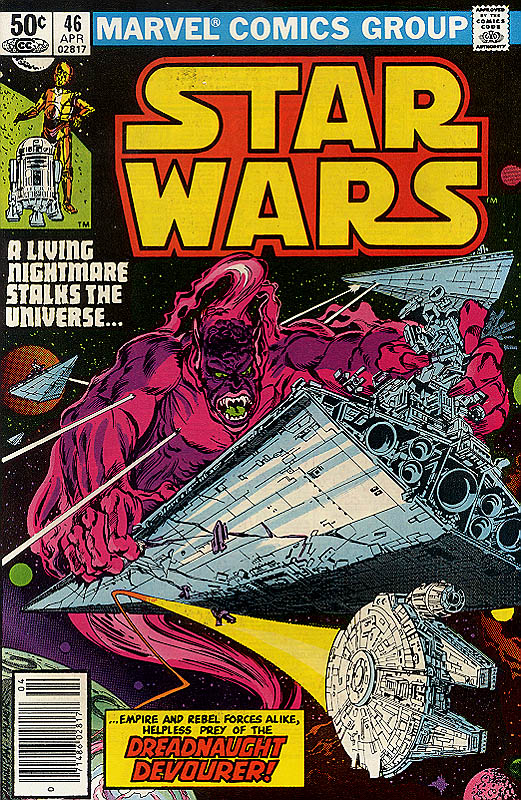 High Points : This is a beautiful tale, well told with some amazing imagery. The story of how Cody is seen as a hero by the Rebellion, when in fact he was a cruel and violent warrior, but on their side is an interesting one by itself, but add the granting of his near limitless powers and awareness that his path of violence wasn't the right one, builds layers onto that story. The final icing on the cake for me is Lando's journey, realising that he's grown from fighting for himself, to fighting for something greater than himself. For all of Cody's status as a hero, Lando is the one actually becoming a hero.

The imagery itself is incredible, with the domed city floating in the void a great setting, the design of the "monster brothers" being similar enough to Cody, but bestial and brutal, and the demons amazing to behold, crushing Star Destroyers in their mighty hands.

I must also complement the poetic nature of the end of the tale, with Lando leaving Plikk and her fleet to the same peace that Cody had sought and they had robbed him of. Not killing them, but robbing them of the glory they sought, and abandoning them to an eternity of boredom and isolation, which to them is a curse, but was peace and tranquility to Cody and his people.

Low Points : The timeline doesn't quite work here, while it's entirely possible for Cody to be a hero of the early rebellion, Lando remembers seeing him in action when he was only a child. Which puts those events somewhere before the founding of the Empire. But, it can be made to work, but either moving the events to when Lando was slightly older, or if he witnessed Cody being involved in the Clone Wars rather than the later Galactic Civil war.

Some of the terminology is wrong for Star Wars, Hyperdrive is repeatedly called Warp Drive, and the Star Destroyers seem to be channeling Anti-Matter, which isn't usually used in Star Wars, as ships are more commonly powered by Hyper-Matter.

So what do you really think ? : Another cracking story in this run, the Dreams of Cody Sunn-Childe has once again stuck with me for 40 or so years. The idea of a Rebel leader, having now found peace forced to destroy everything he has dreamt of because of the Empire, is one I found compelling. For a character which is only mentioned here, Cody comes across with a certain nobility, and the story glimpses into a much larger universe. I find myself wondering what Cody's compatriot, Ansible Beelyard, did to earn himself the name "The Holy Terror", he wears monks robes, but that hardly seems enough, and a darker tale seems to be there, since Cody and his people were in the war against the Empire for no moral reason, but simply because it allowed them to fight and kill.
And that itself is a fairly adult idea for a comic book, that Cody and his people are idolised by the Rebellion as heroes, only because the killing and violence they did was targeted against the Empire. That these people would have perhaps committed atrocities in a time of peace, but because their goals aligned with the Rebellion, they have become icons.

Final Words : Well, it should be obvious, I loved this one, and we're still only towards the beginning of the run of absolute classic stories I remember from my youth, none of which have disappointed so far hopefully the run will continue next issue with, Droid World.