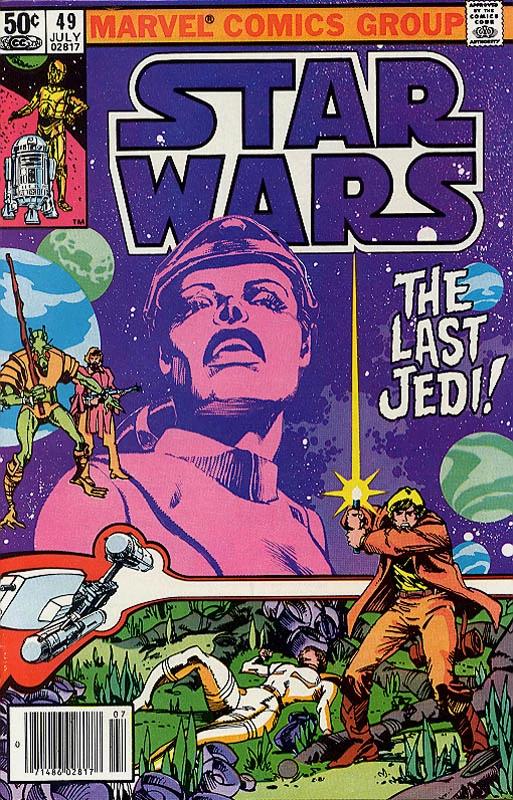 What is it ? : Luke and Leia are responding to a distress call they have detected across the galaxy, and arrive on a planet in a modified rebel Y-Wing along with R2-D2 and C-3P0. They are searching the jungle for the source of the signal when they are attacked by a large beast, but it is driven off by a blaster shot from an approaching figure.
They speak to the shooter, who identifies himself as Prince Denid of Velmor, he explains that years before a mob paid for by Imperial Gold forced him to leave Velmor along with his betrothed Loren, and his bodyguard Jedidiah, they crashed here, which killed Loren, and if he doesn't return to his homeworld soon he'll be declared dead and the monarchy will go to another.
Jedidiah approaches them, who is an Alien, weilding a tree branch, Denid explains that Jedidiah, whose nickname is Jedi, was called to join the Jedi order but refused because he saw danger to the royal family and refused to leave his post. During the escape from Velmor, he received a head wound which has robbed him of his senses.
They take Denid and Jedi back to Velmor, arriving during the coronation ceremony for Prince Anod to become king. Denid identifies himself and declares that he is the valid candidate for king, and the regent agrees to stop the ceremony to determine the truth of his statement.
Both Luke and Leia take disguises as there are Imperial Advisors in the royal court who might recognise them, Leia is pretending to by Denid's betrothed Loren, and Luke is disguised as a bounty hunter.
The tests are successful and Denid recognised as the true candidate to be the next king, and at a banquet to celebrate the return of the king, Luke is informed that strangers must duel for their meal, and he finds himself fighting with Energy Swords, a fight he thinks will be easy because of his familiarity with a lightsaber, but a fight he actually loses.
After the meal, the Imperial Advisor to Velmor, Captain Zeta Traal, approaches Luke, and offers him gratitude "in various ways" if he kills Denid and Loren, something he pretends to agree with, and she then kisses him attempting to show him one of the ways she'll be grateful.
After the meeting, Traal speaks to the Regent, telling him that Luke has agreed, and then they can kill him. Telling him that the new king had better remain loyal and obedient to the Empire after all the effort they've had to put into making him king.
The Regent then receives communication from scouts he sent out searching for Denid that they've located the wreckage, and he monologues about not putting another king on the throne, as he's ruled Velmor for years and intends to keep doing so.
Luke attempts to sneak into Denids quarters to inform Denid and Leia of the plot, but witnesses them being fairly intimate and declaring their love for each other and intention to really marry, and Luke sulks off.
The next day everyone is preparing for pre-coronation games, and Luke reveals about the plot to kill Denid to Leia, and tells her what he witnessed, sulking off once again before she can say anything.
Meanwhile the Droids have taken Jedidiah to a medical droid who has examined his head wound, and declares that the effects are permanent and he will never have a rational thought again.
The games begin with a hunt, and Luke and Trall catch up with Leia and Denid with Trall urging Luke to kill them as arranged, but instead he pulls a blaster on her. The Regent and Prince Anod also arrive, and the Regent urges Anod to kill Denid and Leia and Luke, planning to then kill Anod and remain Regent forever.
Luke however warns Leia shouting her name and pulls his Lightsaber, but too late, Anod shoots both Denid and Leia. Trall instantly recognises them as Princess Leia and Luke Skywalker, killing Anod before he can harm Luke, whose capture will guarantee promotion for her.
Luke flees into the forest, chased by Anod and the Regent, so reaches out through the force for help, touching Jedidiahs mind, who immediately races to help. Luke ends up once again fighting with the Regent, but Trall is lining him up for a blaster shot, when she is attacked by Jedidiah. She kills Jedidiah, and angered Luke kills the Regent with his lightsaber, knocking Trall out while she is distracted by Jedidiah.
Returning to Leia and Denids bodies, he discovers the Anod didn't know how to operate a blaster properly and had left it on stun, with the plots exposed and the immediate danger over, Denid is crowned and Luke and Leia prepare to depart in their Y-Wing. But before they jump into Hyperspace, Luke gives Jedidiah a burial in space, saying that he was truly as brave as a Jedi and deserving of the name. That he was, The Last Jedi.

High Points : Wow, that's a come down from the brilliance of the recent issues. While there's a whole load of story here, there's perhaps too much, with plot lines coming and going, seemingly forgotten of coming out of nowhere. Even Jedidiah, who the issue is named after gets forgotten about for much of the issue, only springing back up at the end.

Low Points : Apart from just too much happening and it making the storyline a mess, there's a whole bunch of other questionable moments in this issue.

Once again Luke has still got his lightsaber, although that might be a clue to this issue perhaps being a tale from earlier in the timeline, before the events of The Empire Strikes Back.

Wow the Y-Wing they take to rescue Denid is roomy, I know it's described as modified, but the fact that not only can Luke, Leia, C-3P0 and R2-D2 fit aboard it, but there's a cabin large enough for Denid and Jedidiah as well, and a closet with disguises for Luke and Leia, and room for Jedidiah to duel against C-3P0 with his stick, it's absolutely massive in there, but appears unchanged compared to a standard Y-Wing on the outside.

And perhaps connected to the last point, although their all in a relatively small Y-Wing cabin, Luke is apparently not told all of the plan, becoming jealous of Denid and Leia pretending to be a couple. Perhaps they discussed the plan in the east wing of the Y-Wing, while Luke wasn't present.

What was going on with the Scouts who find Denids starship and report it back to the Regent? I thought perhaps they might discover the real Lorens body, while would destroy Leia's disguise. But they don't, and their entire inclusion in the issue just seems to be to give the Regent a chance to monologue about his evil plans to betray Anod and remain in charge.

The issue makes a big thing of Trall shooting Anod to stop him killing Luke, but mere panels later is lining up to shoot Luke while he's fighting the Regent when she herself comes under attack by Jedidiah. There's no mention of her switching to stun, it just looks like she wants to kill him herself.

So what do you really think ? : There's a total change in the storytelling to non sequential stories, not only is there a very good chance that this issue occurs much earlier in the timeline, but up until The Empire Strikes Back, the comics told a continuous story from issue to issue, but now we're getting individual tales, with no connection between them, Droid World, Dreams of Cody Sunn-Childe, Death Probe, The Third Law and even Riders in the Void have all stood alone.
I'm not criticising this, but found it worthy of note that they've changed the entire way of telling stories.

But this issue itself is a bit of a mess, there's tonnes going on, but there doesn't seem any real cohesion throughout. Luke becomes jealous, but there are no consequences to that (he tells Leia of the danger later, but that doesn't change anything that happens), the Scouts are mentioned early in the issue, but their actions have no consequences either.
So much is going on, but so little of it matters.

Final Words : I also have to talk about Luke's attitude as described in this issue, it is mentioned that he sees Jedidiah as a parody of a Jedi carrying a stick like a lightsaber, and then a huge point is made of Luke grieving for Jedidiah after his death and performing an elaborate funeral service (standing on the hull of the Y-Wing in a spacesuit so he can ignite his lightsaber in salute to a fallen Jedi).
But nothing that Jedidiah has done seems to really call for Luke's ire. He's described as someone whose duty stopped them joining the Jedi order, and received a grievous head wound helping the Prince escape a mob.
Jedidiah comes across as having been heroic throughout, and just the victim of brain damage. And even though the damage makes him speak in broken sentences and a simplistic manner, his actions do not endanger anyone or seem too random, he's still attempting to protect the Prince.
Between that and the lovesick strops at Leia and Denid pretending to be betrothed, Luke really doesn't come across well in this issue.