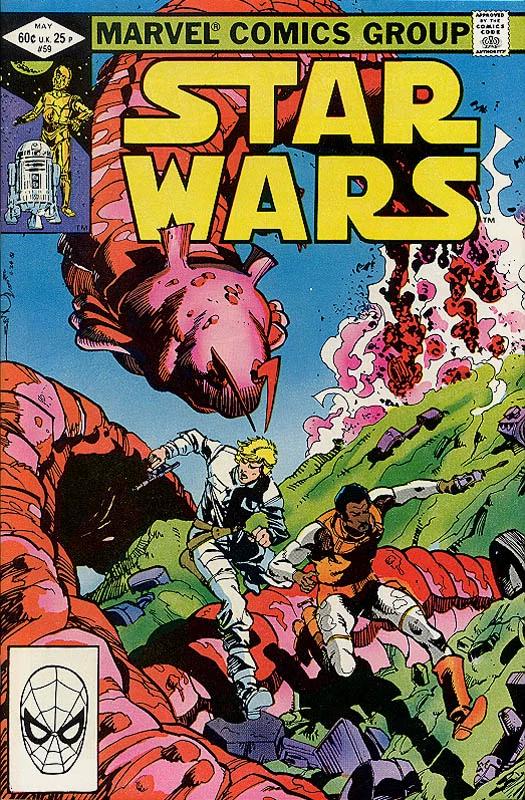 What is it ? : We left the last issue with Lando and Luke surrounded by thugs, and it is soon revealed that they work for Orion Ferret, the man they are looking for. Retiring to his offices they complete their deal with him, purchasing 4 Tie Fighters which he has hidden away on the garbage world of Patch-4.
He loans them his personal shuttle which is preprogrammed with the coordinates of where the Tie's are hidden, intending for his guard creatures to kill them, so he can keep the money and resell the Tie's, however they leave Chewbacca with him, with orders to kill him if they don't return.
They arrive on Patch-4, and spot the Tie's hidden under camouflage netting a short distance away, but as they leave their ship they come under attack by a giant worm. They are rescued by a group of "Hoboes", who inform them that Orion Ferret uses the worms as guards, and uses a device on his shuttle to pacify them.
Meanwhile, Ferret activates a trap on Chewbacca encasing him in crystal, with intentions to sell him into slavery, however Chewbacca shatters the crystal forcing Ferret to flee to his personal escape shuttle, but Chewbacca disables it with fire from his Bowcaster.
Lando distracts the creature with Blaster fire, allowing Luke the opportunity to sneak aboard their shuttle and activate the sonic pacifier, calming the beast.
Chewbacca catches up with Ferret, intending to rip his head off as instructed, but Luke and Lando return with the Tie's, and inform Ferret that they've left the sonic pacifier with the people on Patch-4, so the planet will now be useless to Ferret.
The three heroes return the Tie's to the Rebel base on Arbra, and Leia arranges a celebration, but asks Luke to shower and change to get the stink of Patch-4 off him.

High Points : Another enjoyable little story, and refreshing for not involving the Empire. Having the heroes have to deal with the underworld feels very Star Wars, and Ferret trying to double cross them adds a nice level of complication, especially as the trap isn't too ornate, just him "forgetting" to tell them about his security.

Ferret himself comes across as more of a Judge Dredd villain than Star Wars, with over-exaggerated features and wearing a ridiculously fancy suit with love hearts on the lapels. But I've no massive problem with that, he's memorable, and I really like Judge Dredd and it's villains. (I'm aware that British writers who also worked on 2000ad did Star Wars strips for Marvel, but I checked and this wasn't one of them).

Low Points : The "Hoboes" on Patch-4 feel a little convenient, being people displaced by the Empire and travelling through space, but becoming stranded on Patch-4. Their only purpose seems to be to pass information to the heroes about Ferrets guard creature, and to deny Ferret use of the world afterwards (although there's nothing really to stop him setting up on the far side of the planet if he wants to).

So what do you really think ? : The story is a bit of nothing really, not really much more than just an encounter, but it's a fun encounter.

Final Words : They're doing a fairly good job of weaving the stories together, perhaps far better than they did during the early issues, with all of the recent issues being about the base on Arbra. It's definitely something I wish they'd done in those early issues, showing the Rebels setting up a new base, instead of leaving them languishing on Yavin IV for nearly 50 issues.