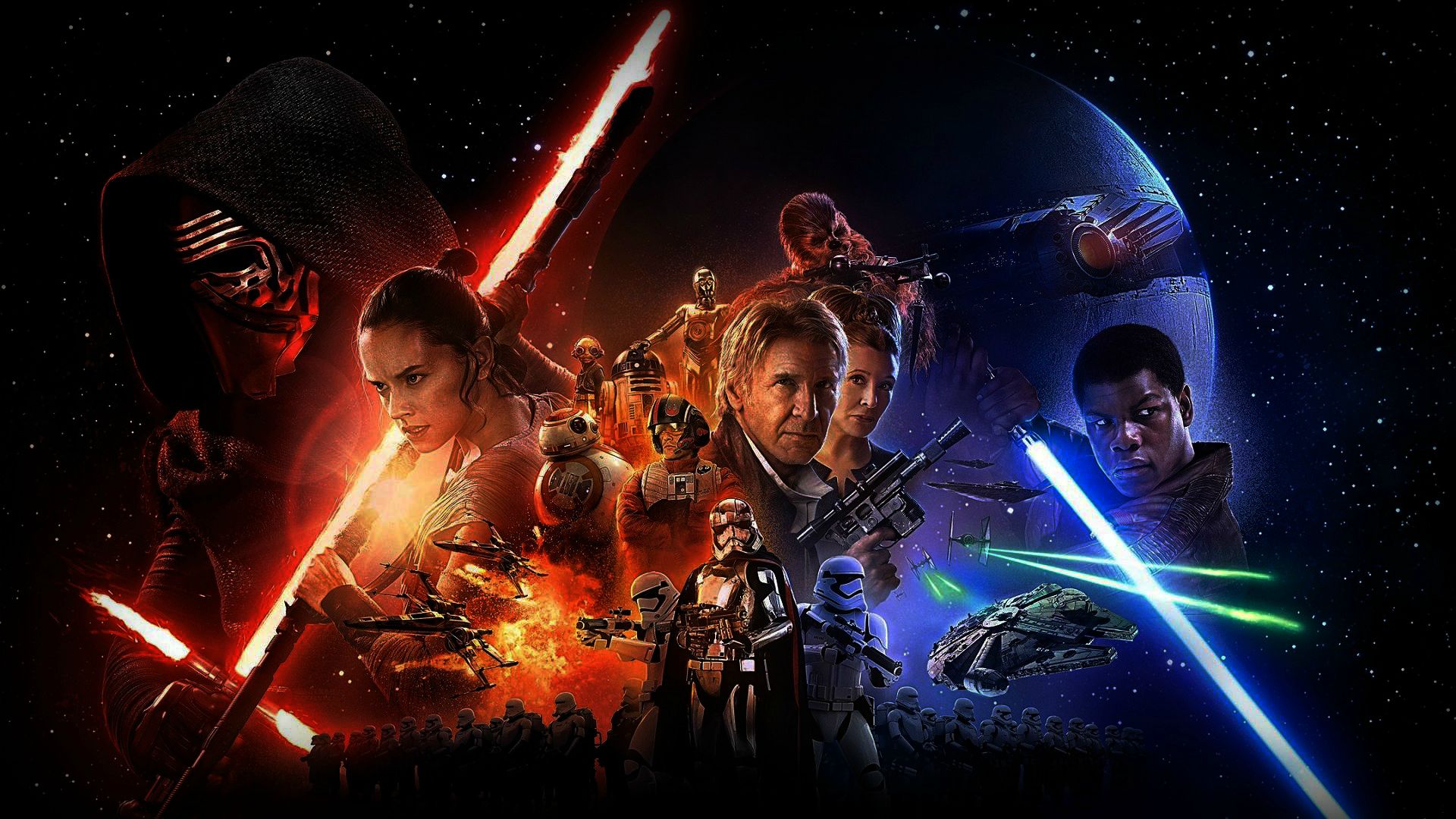 What is it ? : It's the continuation of the Star Wars Saga, released in 2015 and at time of writing the most financially successful film of all time. Titled Episode 7, it follows on from Return of the Jedi after a break of around 30 years.

The movie follows the actions of a new group of heroes (and some of the old ones) as they fight against a successor state to the Galactic Empire, called the First Order and their new planet destroying super-weapon (hey that sounds familiar) "Starkiller Base".

It introduces a new force sensitive with a mysterious past, Rey, an ex-Stormtrooper, Finn, and a cute droid with an attitude, BB-8. And brings back, Han Solo, Chewbacca and "General" Leia, and briefly C-3PO and R2-D2, (and even more briefly Luke Skywalker). On the villain side, Kylo Ren is an effective Vader replacement, and Snoke is all mysterious and obviously setting up the character for later movies.

High Points : Well, it's Star Wars, there's some really cool fights, some cool starfighter action, lightsabers, action, and witty dialogue, everything you could love about the movies.

But perhaps the best thing in the film is the characters, Rey and Finn make an excellent pair. Ignoring any romantic subtext (and the movie does ignore it), they work together brilliantly, and the characters make a lot of sense. Rey is amazed by the universe, and bit of a fangirl to tell the truth and a little reluctant to leave her home, no matter how shitty it is. Finn is perhaps the most realistic hero that Star Wars has ever had, constantly looking for a way out of the dangerous situation he's found himself in, while still digging deep and being a hero when needed. He also has a reasonable explanation why he's a crack shot and can handle most weapons (he's an ex-StormTrooper), instead of most heroes just being automatically good at it because they're a hero.

BB-8 is a brilliant addition, while being derivative of R2-D2, she's (yes they've said it's a she) a lot more communicative with her beeps and whistles than R2 ever was, and she gets some brilliant scenes.

Kylo Ren is a decent bad guy, he's got a reasonable amount of background setting up while still having some mystery about him (why did he turn to the Dark Side?, why does he worship Vader so much?), and the reaction of members of the First Order to him throwing tantrums is brilliant. After all who'd want to tell a dark side force user to chill out.

For a sci-fi techie geek like me, there's a lot of new fighters and equipment for me to drool over, all of it obviously descended from the original trilogy, but cool never the less.

Low Points : Well, lets be honest up front, it's almost a remake of "A New Hope", and there's not a lot more to it than that. A reluctant hero from a desert planet gets drawn into the battle against a planet destroying weapon. Heroes have to infiltrate the super-weapon to rescue the female lead. The Dark Side villain kills the young heroes mentor . . . We've seen it all before.

However, I've carefully worded the above, because I'd have been tempted to call the First Order a evil galactic empire. But the movie really doesn't give us enough to go on. My son had the theory than the First Order were actually just 1 ship's worth of survivors of the Empire, raiding planets and kidnapping children for indoctrination as StormTroopers. And to tell the truth, that's as good a theory as any. There's no evidence in the film that the First Order is any galaxy threatening force, they do have a super-weapon, but they might have found it for all we know. They aren't demonstrated to have any more than 1 Star Destroyer, and a Dark Sider.

Also so many characters are barely featured. The Chrome Stormtrooper leader, Captain Phasma, after being hyped and featured in advertising literature as a major villain, doesn't really do anything except get kidnapped. General Hux, leader of the First Order military, barely does anything, and maybe it's a sign of how old and decrepit I am, but he looks more like the work experience teenager than a respected General.

Poe Dameron also featured heavily in the advertising literature, barely gets a look in during the film, but the worst offender is Luke Skywalker. I'd honestly have prefered him not to be in it at all rather than the 5 seconds or so we get right at the end. The movie could have ended far more comfortably with the destruction of Starkiller base, and the search for Luke beginning, rather than a couple of minutes of flying through space, and then Luke looking constipated as he's handed his old Lightsaber ("Did you find a hand with this?").

The space gangsters who come for Han Solo early in the movie, aren't anything really interesting, and are obvious stand-ins for Greedo and Jabba, but have a fraction of the charisma, and aren't anywhere near as memorable.

So what do you really think ? : As mentioned above, this is pretty much a reworking of "A New Hope", however, that's exactly what they needed to do. After the Prequels, and this being the first Disney, non-George Lucas written and directed movie, they needed to prove that they could make Star Wars. And that's what they did, they made Star Wars.

That said, they could have mixed it up a little, the movies just a little too close to Star Wars: A New Hope for it to be really interesting, and showing us somewhere else except another desert planet would have been more interesting (or even if Jakku was Tatooine, but with the wrecks and things lay around, to show us how the Galactic Civil war even effected there).

But still, a darn good movie.

Final Words : I really enjoyed this movie, but after watching Rogue One, the flaws in Force Awakens became more apparent to me, leading to me not liking it quite as much. But I really have to take into account that Disney needed to make Star Wars, and they've proven they can, which means they can now move on and make other movies in the same universe which are better. That said, this is still up there with the Original Trilogy, and beats the Prequels for love of the universe, story telling, characterisation and good dialogue.

Here's to the next one.