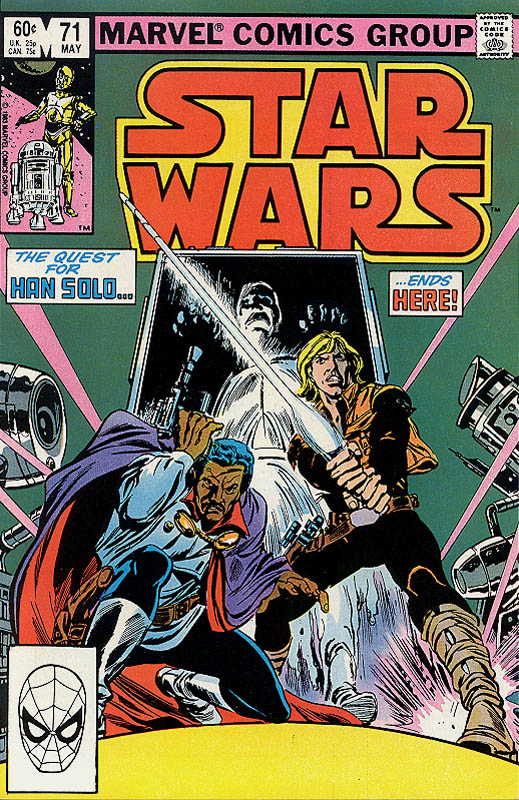 What is it ? : After leaving R2-D2 and Chewbacca behind because the group would be recognised as Droids and Wookiees aren't common on Stenos, Luke and Lando head out into the city to find Bossk and IG-88. Heading into a local bar, Lando gets recognised by someone he once swindled, who issues a 10,000 credit bounty on him. Luke slashes a support beam with him lightsaber, collapsing some of the roof and allowing them to slip away in the distraction.
But as they loose themselves in the crowds, they spot Bossk and follow him, but this leads them back to the mob at the bar, and the two get seperated. Luke finds himself in an alley, where he encounters Rik Duel and Dani, who claim to not hold grudges, just wanting help in locating Chihdo who is missing.
Lando locates Luke, and tells him he's spotted Han's corbonite frozen body being taken through the streets, so they trail it and then burst into where it's stored, only to discover it's not Han, it's Chihdo, which Bossk and IG-88 have used as a lure to spring an ambush on the two heroes, surrounding them and telling them "You're surrounded." . . .

High Points : I'm having to reach a bit to find something to like in this one . . .
The bait and switch ending is pretty good, where instead of it being Hans Carbonite frozen body it turns out to be Chihdo, which will give Rik Duel and Dani and reason for helping the heroes next issue.
I was also amused by Dani's over-amorousness towards Luke, apparently a Zeltron trait, and him having to uncomfortably deal with it while illuminating the dark area with his lightsaber and avoid hurting her with it.

Low Points : But there's not much to like in this one, it feels like filler.
Lando gets recognised by a former target he swindled, just to make a cheap joke as he boasted about handling things quietly and not drawing unwanted attention, and to lead to a fairly pointless runaround. They then stumble back into the same group just pages later, without any real effects except providing an obvious reason why the bounty hunters are aware of their presence.
It also stretches credibility that Rik, Dani and Chihdo are still hanging around on the same planet some years later., because although they tell the story of how they survived the Stenax rampage, they give no reason why they stayed on the same planet for so long.

So what do you really think ? : While there's a little movement in the overall plotline, not much really happens in this issue, a lot of running around, the encounter with Rik and Dani, and then the trap containing Chihdo.
And we don't even really discover any of the repercussions of the last issues events, while the Stenax have returned to the skies, all that seems to have happened is that they now carry lanterns in the skies above the city, providing street lighting.
They apparently killed an Imperial Governor during their rampage, but we don't see any after effects of this, the Empire still has Stormtroopers in the streets, but they seem to have not reacted to the events at all.

Final Words : I'm being quite critical of this storyline, as it seems just on the verge of greatness. The return to a previously visited location (even if that visit was only in flashback), and return of known characters (also only known through flashback) makes this feel a little more substantial and important than other issues.
The events that occurred in the last issue feel as if they should have repercussions, (especially given that the Stenax are so hostile to offworlders), for example it might have been nice to have seen effects of a brutal subjugation of the Stenax by the Empire, or just that the Empire no longer had a presence here.
But nothing has changed. Even, as noted above, Rik, Dani and Chihdo are still here. Which really makes it feel as if the events of the previous issue didn't happen years ago, but only happened days before. Which does make the flashback seem unimportant.

It's a fairly boring little runaround, fingers crossed that the next issue will be more substantial.