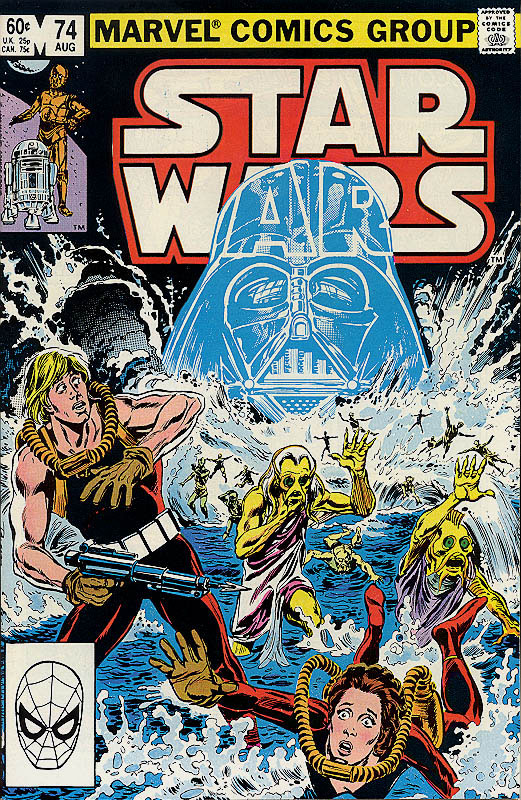 What is it ? : Luke, Leia, Lando and Chewbacca (really ruining the alliteration there Chewie) have arrived on the waterworld of Iskalon as they are searching for the missing rebel pilot Tay Vanis. They meet the native people of Iskalon, who are water breathers requiring water tanks to operate above the surface.
The Iskalonian people have built the city of Pavilion, where air breathers can descend into the depths of the ocean and interact with them, and have no concept of privacy or deception, due to the way that sound carries through the water rendering both almost impossible on their world.
The groups interactions are monitored by another human figure, but their talks are fruitful, discovering that there are Imperial Aqua troopers stationed here, but also that Tay Vanis had a droid, which is now within the Imperial Fortress on Gamandar, another world within the system which the Empire has subjugated.
Lando, Chewbacca and Prince Mone, while Luke and Leia remain behind as they are too likely to be recognised.
Luke is given an air tank and taught to swim by their escort, Primor, but they spot inside Pavilion the figure of Kendle, the wife of Prince Mone, whose water tank has been smashed and she is dying, so Luke rushes inside to help her.
Meanwhile, on Gamandar, the Imperial Officer in charge, Admiral Tower has received information about Rebel spies having arrived on Iskalon, so he fires an interplanetary missile at Pavilion. The Millenium Falcon avoids the missile, but it detonates deep within the oceans of Iskalon, setting off a massive tidal wave which wrecks the fragile city of Pavilion.

High Points : There's a lot of world building in this issue, and Iskalon and it's inhabitants are pretty interesting. The idea of a species which is completely water breathing, rather than just amphibious like the Mon Calamari or Quarren is pretty unique in Star Wars, but the other parts of their culture, for example they totally lack the concept of privacy, which makes them a very open culture with public displays of affection and no conception of lies being a strange and interesting feature of the species. This along with the underwater glass tubes of Pavilion make Iskalon an interesting setting for the story.

Low Points : However, all of this world building is done at the expense of action, and in fact the high point of danger and risk for this issue is Lando piloting to avoid a missile which isn't actually targeted at them, with the rest of the issue being about Luke taking swimming lessons, and Leia missing Han as she watches the Iskalonians showing affection for one another.

So what do you really think ? : Difficult to judge this issue as it's so obviously the set up for a longer story, and while not much happens, I still found it an intellectually interesting read and the graphic design I found appealing.
Partnering the fairly naive Prince Mone with the swindler Lando has the foundation of some interesting and amusing encounters.

Final Words : Well, with a tidal wave hitting the city, and Lando and Mone arriving in an Imperial fortress, there's definitely potential for action packed issues to come, so I await the next issue "Tidal" with some interest.