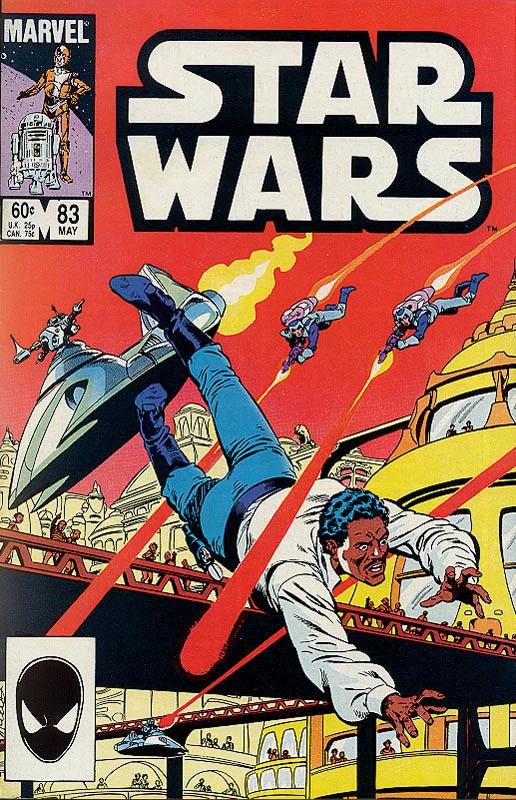 What is it ? : Lando has arrived on the world of Drogheda, having been summoned by Queen Sarna an old girlfriend of his, and is travelling to the palace with the Queens Sister Danu, when they come under attack by Revolutionaries who are attempting to overthrow the queen. They seem to scare the Revolutionaries away with a lucky shot, although it turns out that the Royal guard headed by Harlech have arrived.
Lando is taken to the Queen and once they are alone they show continuing affection for one another, and the Queen explains that the Revolutionaries intend to overthrow the legitimate government and hand over control to the Empire.
The Queen asks Lando to help capture the Revolutionaries who have been tracked down to a mine, the plan being for Lando to sneak in the rear entrance and flood the mine from it's water reservoirs. After Lando departs the two sisters have an argument, as Danu is also attracted to Lando, but the Queen doesn't want him distracted from his task.
The Royal guard and Harlech take up positions at the entrance to the mine while Lando sneaks in and plants the explosives, however the Revolutionaries are prepared for him and catch him, but in the struggle his detonator goes off, washing them all from the mines. As Lando struggles out, he is nearly killed by Harlech who suggests in the future he should wear a uniform to identify whose side he is on, but Lando is enraged as the Royal guard kill the Revolutionaries who he was assured would be captured instead.
Lando captures one of the Revolutionaries, and is now sure he's not been told the full story, so returns the man's weapon to convince him of his impartiality, but before it can work, Harlech gun the man down, claiming he thought Landos life was in danger.
Lando is further enraged, but realises there's definitely something more going on especially on hearing Danu blurt out the man's name upon seeing his body, and leave to get a drink in a nearby cantina.
While there he overhears Royal guards discussing the killing of the Revolutionaries, and how democracy must be put down before it catches on. Lando realises what going on and confronts the Queen but she summons the guards on him.
He is rescued by Danu who is working with the Revolutionaries, and flees on a Jet bike, joining a Revolutionary attack on the Palace. He bursts through the dome in the throne room on his Jet Bike, and takes the Queen hostage, threatening her life, but Harlech reveals that he's fine with that, he'll just take over as King, but before he can act further, the Revolutionaries burst into the throne room and gun Harlech down.
Danu declares democracy for Drogheda, and Lando asks about a reward for helping, but Danu tells him he's got 10 minutes to get off world, but he can get some payment if he takes Queen Sarna with him into exile.
As they fly off in Lando's ship, The Cobra, Sarna and Lando bicker about entering into a new business deal together.

High Points : Well, there's a whole load of story in this one, even if much of it isn't terribly well thought out, but there's a load going on, with the raid on the mine, the Revolutionary attack on the palace and a bunch of intrigue going in. This would normally be spread across a couple of issues, with the arrival on the world and the initial assault on the Revolutionaries in one issue, with the follow up to that and overthrow of the queen happening in the next.

It's also nice to see Lando have a story to himself, and it's a delight to see him a character in transformation, where he struggles between his natural instinct being the cash hungry con-man of before and trying to be the hero that he is already considered by the Rebellion for his actions in the attack on the second Death Star and others. Although we see similar with Han Solo sometimes, it's done better here and it's far more of a struggle for Lando, as he is definitely trying to live up to the reputation he's earned.

Low Points : With so much story packed into the issue, there's not a lot of detail here, why does Harlech think he can go from head of the Royal Guard straight to King in a Monarchy, there's surely got to be other claims on the throne other than just being there.

There's also a packed in plotline I skipped in by summary above about Lando thinking that it's Harlech who's working with the Revolutionaries, without any evidence, and it just leads to Harlech denying it without any consequences, a totally pointless inclusion.

It feels out of character for Lando to be brought in to lead a military raid to capture the Revolutionaries, not the kind of scheme he'd normally be involved with at all, and far more of a straight forwards military operation or SWAT raid.

And while it's slightly amusing for Lando to ask for a reward for his actions at the end, their threat of giving him 10 minutes to leave the planet because his deal was with Sarna not Danu, seems like they're threatening him with imprisonment or worse, when he basically did their job for them. Which comes across as them becoming the villains, it's bad enough that the Iskalonians chased them away for justified reasons, this feels unjustified.

Lando does seem a little innocent throughout this story, accepting that the Revolutionaries are going to join the Empire, without any evidence, or it even seeming to make much sense (since this is post Return of the Jedi and the comics haven't introduced any Imperial Remnant or the like yet, so we're still kind of led to believe that the Empire is completely gone.

So what do you really think ? : I quite enjoyed this issue, there's lot to enjoy and even if it doesn't always work the joy of a story like this is that if you don't like where the story is going, it'll be different in a page or two.

Final Words : The whole term for the democratic movement on Drogheda, Revolutionaries, annoyed me throughout, especially the number of times I've used it within this review, having to come up with a different term that Rebels, or Resistance (although they're decades early for that one), they've used this and it's just an unwieldy term. While I realise they did this to hide the fact that it was a democratic movement, I'd definitely have preferred it if they were anti-monarchists, or something along those lines.