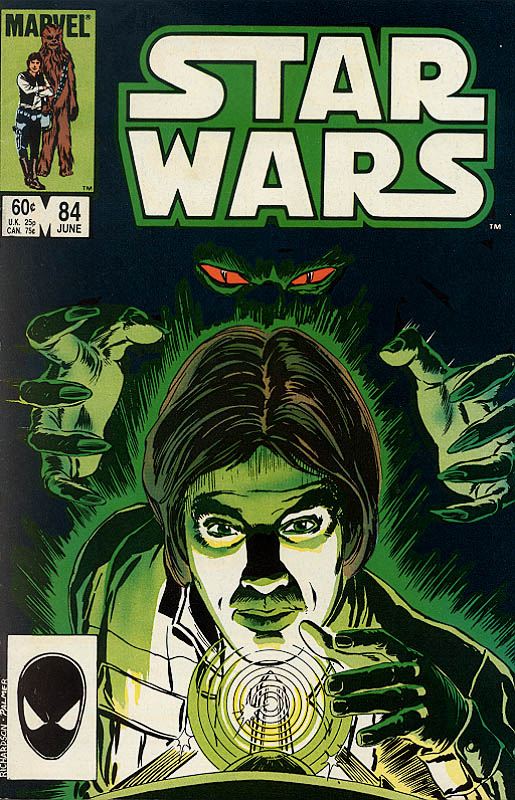 What is it ? : Han has been issuing an invitation to join the new Alliance of Free Systems to the people of Zhotta 3, when he takes a trip to a low-life cantina to relax. He's playing Sabacc, and his opponent puts up a crystal and a map against the Millenium Falcon, telling Han that the map is to Seoul 5.
Seoul 5 is the legendary home of the Seoularians, an advanced species who wiped themselves out in a war long ago, leaving only some of their border colonies behind, their home would be filled with treasures, so it's location extremely valuable.
The man tells Han that when he was a scout for the Empire his hyperdrive was damaged and mis jumped taking him to Seoul 5, and he wants the Falcon so he can return to loot the world. He presents a Full System, a hand which can only be beaten by one other in the game, which Han reveals he has, but has to flee after the man accuses him of cheating, taking the crystal and map with him.
Han and Chewbacca take the Falcon to Seoul 5, landing near a still standing city of the Seoularians, Chewbacca remains with the Falcon to guard it and keep the engines ready to leave after they detect other humanoids on the planet.
The humanoid life signs are revealed to be an Imperial scouting team, under the command of Captain Drezzle, who has a telepathic cat-like alien as his adjutant.
Han enters the city, finding a statue to the Mother Goddess, Onrai, the goddess of the planet Notron, which claims to be the cradle of all Humans in the galaxy. Han is skeptical of this claim, saying that a half dozen other worlds also make the claim, when he comes under telepathic assault from Drezzles Adjutant.
Using instructions from the map he triggers a trap door and drops down a repulsorlift tube, finding himself in the crystal room that the ex-imperial scout had described, but he becomes aware of Stormtroopers patrolling the area, and discovers two archeologists tied up that he rescues.
As they attempt to leave, Han comes under mental assault from the Adjutant again, but uses the Crystals to protect his mind, giving him chance to insert his crystal into a control console which creates a flash of blinding light, allowing them to slip out and return to the Millenium Falcon.
As the ship soars away from the planet, the crystal Han inserted causes the city to explode, which destroys Tie fighters launched to pursue the Falcon as well. Although Han is saddened by the loss of the planet, at least they kept it out of the hands of the Empire, and Nu-Ar, the female archeologist plants a kiss on his lips, making Han think it wasn't a total loss after all.

High Points : The artwork has been improving recently, but I really have to make a comment about some of it in this issue.
You see, when I was but a child and Star Wars (not yet Episode IV, or a New Hope) had come out, I received a toy Millenium Falcon as a present. It was what they described as a Die Cast model, with a metal top, and plastic lower half, and plastic highlights such as the turret, cockpit and sensor dish. Unlike other toys of the era, which made the Falcon somewhat chubby to avoid it being overly fragile, the metal nature of this toy allowed them to get the proportions correct and keep it slim and graceful.
The reason I mention this, is that the artist was 100% definitely using the exact same toy as his model when he was drawing the Falcon in this issue, I can clearly make out that the lower turret is just a small raised circle on the bottom of the ship, a familiar triangular feature between the rear landing legs, the landing legs themselves with little triangular feet which would snap open and closed. And finally, and most telling, the lines which are just squiggles in this artwork, which on the model were the country of manufacture and copyright information.
Not a complement, not a criticism, but a lovely detail which made me reminisce over my childhood (I possibly still have that toy somewhere in storage).

The story itself is action packed, with loads going on, as Han wins the map, finds the lost world and explores it. The appearance of the Empire is nice as well, introducing a new type of exploration vessel we've not seen before, yet is reminiscent of the Lambda shuttle design, yet also just bringing back the familiar nbad guys who have been missing since Return of the Jedi (only a few issues, but their absence has been noticed).

Low Points : Although I enjoyed the story, I have to comment that the end of it, just kind of happens. There's no real reason for the planet being blown up, the technology shown doesn't seem to be galaxy changing or threatening, Han doesn't seem to have any major plan to blow up the planet, he just kind of slots the crystal in, escapes and then boom, end of story.
Introducing this ancient civilisation, just to destroy the only evidence of their existence by the end of the story just seems pointless. As it's definitely something they could have returned to a few times, as discoveries were made, and the Rebels struggle to keep ancient secrets from the Empire, before eventually needing to blow the place up.
As it stands it's all a little rushed, even the two archeologists, just seem to turn up to give Han someone to rescue, they don't really serve any other purpose in the story.
Nothing which destroys the story, but a disappointment in an interesting little tale never-the-less.

So what do you really think ? : I enjoyed this story, it definitely reminded me of Sci-Fi tales from my youth, where explorers would find abandoned worlds from ancient disappeared civilisations, gleaming abandoned structures slowly being absorbed back into the jungles. And I enjoyed this story as much as I loved those old stories.

Final Words : This issue is the first mention in Star Wars continuity of the planet Noltron, which appearently has the claim of being the homeworld of all Humanity in the Star Wars universe, which Han doesn't believe. Well Noltron turns out to be an ancient name for Coruscant, which is generally believed to be the homeworld of humanity, which is a nice touch tying this tale in with the greater Star Wars continuity.