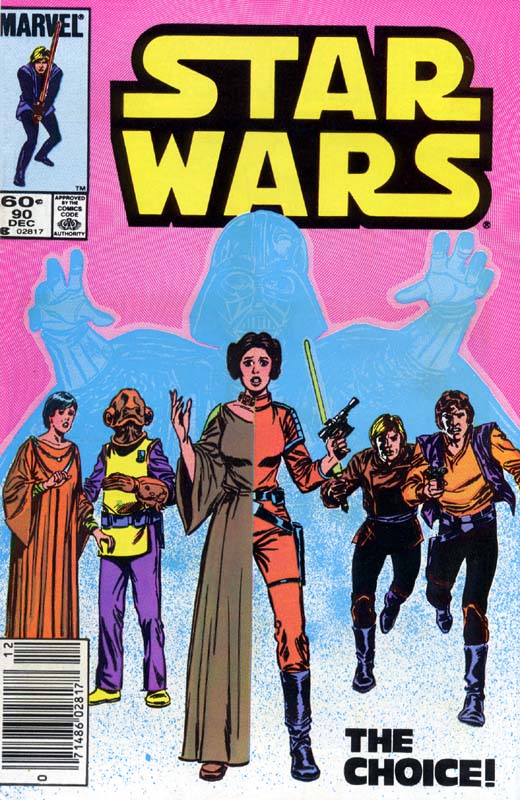 What is it ? : Leia and Mon Mothma arrive back on Endor, and Mon Mothma begins briefing Admiral Ackbar on what happened on Herdessa, when Leia rushes off as she sees Luke's X-Wing arriving along with Rik Duels Moonshadow.
She greets Luke, and is surprised when Dani leaps from the Moonshadow hugging her, while Luke arranges for Alliance medtech's to help with the injured Kiro. Leia is concerned about the transition from a rebel movement to a new galactic government. Luke reassures Leia, but warns that they need to be very cautious in the future, as the secret of their parentage needs to remain hidden. The two don't intend to go announce that their father was Darth Vader.
They check up on Kiro who is recovering, Luke questions how Kiro knew how to disable the device, eventually coming to the conclusion that Kiro is Force-sensitive. Kiro requests to Luke that he train him to be a Jedi, so that he can become a Jedi Knight. However, Luke refuses; he is not yet ready to take on students. Kiro is distraught at the news, and he yells out at his friends. Depressed, he tells the two to leave him alone.
Some days later, the First Conference of Free Peoples has begun, headed over by Admiral Ackbar and Mon Mothma. The two are eager to outline the important aspects of a new galactic government. As the conference begins to discuss the basis for the Alliance of Free Planets, Mon Mothma mentions that those who are not present will be forfeiting their right to vote.
Luke and Leia discuss that Kiro has been ignoring them and spending time with Rik Duel and his gang who have organised gambling tournaments . As they arrive they witness Rik winning another game, and a Rebel soldier reacting badly, pulling his weapon on Rik, during the standoff, the soldier fires, blasting Chihdo from the Ewok platform, where Luke uses the force to catch him and lower him to the ground, before igniting his lightsaber and chasing the Rebel soldier down.
Although Luke has no intention of killing the wayward Rebel, Kiro intervenes, claiming that Luke is a trustworthy friend with good intentions and that the group should not attack each other as they are all allies in the Rebellion. Kiro understands that he must be patient with Luke and that he can still learn from his friend, even if he has refused to train him in the Force. Meanwhile, the First Conference of Free Peoples has ended. Mon Mothma claims to Admiral Ackbar that Luke, Leia, Chewbacca, Lando Calrissian, and Han Solo have lost the right to help govern the new government since they missed the meeting. Ackbar responds that the result may be for the best.

High Points : What little story there is here is told well, dialogue is interesting and they deal with some of the continuing plot points quite interestingly.
For example, because of his discovery that Vader was his father, Luke is unwilling to begin training others in the ways of the Jedi, something which Kiro doesn't understand.
Also quite sensibly, Luke and Leia make the decision that they'll keep their family connection, and parentage secret, something I definitely can't see coming back for them to regret in the future.

Low Points : So much within this issue makes no sense, the Rebel Soldier shooting Chihdo, Kiro's reaction to Luke refusing to train him (which seems only to exist to add tension, as it's outside Kiro's normal behaviour), and so much else.
But the big one is the "shock" revelation at the end that Luke, Leia, Lando, Han and Chewbacca have lost their right to help govern the new Alliance of Free Worlds because they failed to attend the first meeting.
Now this I seriously have to question. Not only is there no reason given for Luke and Leia's non attendance (although they do make use of their time stopping a murder), but also Han, Lando and Chewbacca were sent on a mission by the Alliance which means they can't attend. Surely this should be mitigating circumstances, there's got to be other Rebel leaders who couldn't attend this meeting due to the fact that the fight against the Empire is still raging.
But even if we put all that to the side. Why the hell would they be leading the new government anyway? The only one of them with any political power would be Leia, but on the galactic scale she is the leader only of the few survivors of Alderaan. Luke, Lando, Han and Chewbacca are leaders of no-one but themselves, so really shouldn't be sitting in meetings with the galactic government as anything but advisors, or as military leaders. Because that's what they are really, they hold military ranks, we've heard Han called General, and Luke referred to as a Commander, and in that way they can command forces and lead the new galactic government. But I'm afraid I've never really heard of democratic governments where Generals, Admirals and Commanders sit down in the Parliament or Senate or whatever to rule, the types of governments where that happens definitely aren't the type the new Alliance of Free Systems wants to be.


So what do you really think ? : There's not a lot of story here, Kiro strops about not being trained as a Jedi, Luke intervenes after a fight breaks out due to gambling, Kiro sees value in Luke's friendship and helps calm things down.
Definitely one of the most boring issues I've seen of the series so far, which is pretty disappointing.

Final Words : We're getting towards the end of the series now, with only 17 issues of the original run remaining, and from what I remember being told some pretty great stories to come. But with issues like this, I can't help but think, can't they come a little sooner?