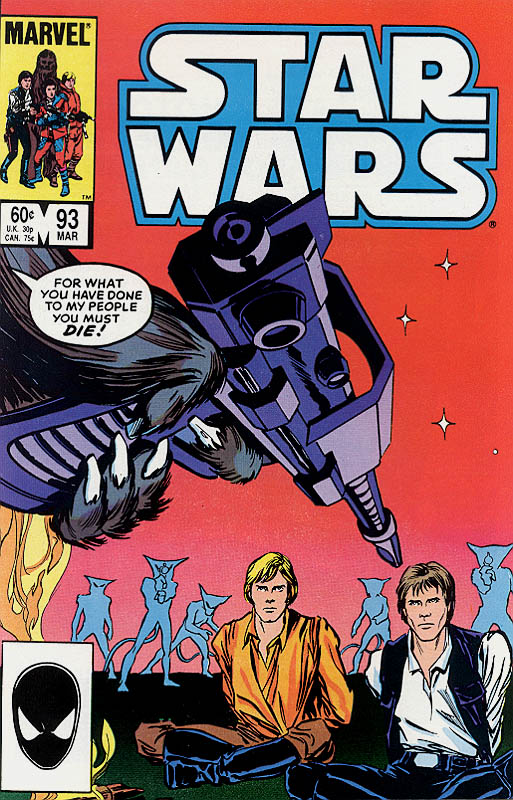 What is it ? : Luke, Leia and Han are on a diplomatic mission to Saijo, and are discussing the way the people virtually worship them for their part in the downfall of the Empire, when they see an X-Wing under attack from 3 Y-Wing fighters.
Leia comments that they're both types of fighters used by the Rebellion, but Han says he knows who he sides with when he sees 3 fighters attacking 1, so they board the Falcon and attack the aggressors with it's guns, destroying them.
The X-Wing crashes, and they land the Falcon nearby, and Han pulls the pilot from the wreckage, a cat-like alien named Minka.
Minka tells them that her Rebel cell on the world Cantros is under attack by the Empire, seemingly under command of the Emperor, or at least someone claiming to be him, and that the news of the fall of the Empire and death of Palpatine hasn't reached there yet.
The heroes decide to investigate, but Luke still feeling uncomfortable with the hero worship from the people of Saijo, avoids mentioning exactly who they are. Arriving on Cantros, they meet Minka's Rebel cell, who tell of being in a fight against Imperial forces on the opposite side of the planet, and Han reveals that since the destruction of the Death Star, Imperial plans have fallen into their hands which reveal no Imperial activity near Cantros, but the Rebels are losing people daily, and their head of intelligence Durne tells them the information is good.
They set off to investigate the Imperial base, but the Falcon is shot down, and although they manage to land safely, Han, Luke and Minka's mate Sami are captured, while Leia and Minka manage to slip away.
Their captors prepare to torture them for information, but argue that it's not what the Rebel Alliance does, revealing that this group considers itself to be Rebels as well, and the truth is revealed when Durne arrives revealing he has been making the two Rebel cells fight and kill each other.
Leia helps free Luke, and Luke reveals who he is to the Cantosians, brandishing his Lightsaber, and both sides recognise that he is a hero of the Rebellion, and stop fighting. They capture Durne, and Luke ponders over what is going on that someone would be causing Rebel cells to fight rather than unite after the fall of the Empire.

High Points : I was impressed in this issue with the payoff for Luke's embarrasment over being hailed as a hero of the Rebellion, which he hides when he meets the Cantrosians, but uses to his advantage when the plot is discovered to bring both sides together. Also the concept of two secret Rebel cells fighting but not knowing each other are also Rebels is a solid one, how a single agent manages to control the flow of information to both to keep them fighting.

Low Points : I've never particularly been a fan of just taking an animal type and making it humanoid in these Marvel comics, I know Wookiees are supposed to be dog-people, but they're changed enough to not really be recognisable. But the Cantrosians are just cat-people, and it's just too obvious for my liking.

The issue also leaves you hanging, without revealing any reason for what Durne is doing, reading Wookieepedia, I see that it's part of Blade's plot against the Alliance of Free Systems, but there's nothing in this issue to let you know that, and for all that it tells you, Durne might just be a sociopath who's just doing it to watch people die.

So what do you really think ? : It's an interesting enough story, but it's difficult to take the Cantrosians seriously, and the story is just wrapped up without any pay off. The two sides discover they're both Rebel, and declare peace, there's no regret for the deaths of comrades, justifiable anger at Durne, or even celebration at the news that the Empire has actually been defeated after all. They simply realise that they're on the same side, that they might once have been neighbours, and it's over.

Final Words : While Wookieepedia reveals this is part of a continuing plot by Blade to destabilise the Alliance of Free Systems, we're not told of this in the comics yet, and it would be far more powerful if they showed him behind the scenes manipulating things. As it's the one thing that the comics are seriously missing at this point, a villain to challenge the heroes. They've won, and while there's still work to be done, there's no real risk of challenge for them.