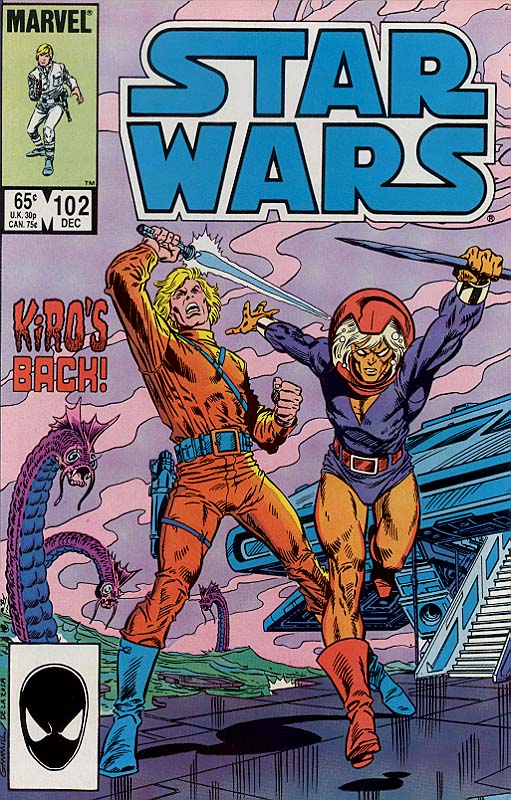 What is it ? : Luke and Lando are returning to Iskalon to inform the people of the death of Kiro, arriving at the wreckage of Pavillion, they discover a number of dead Nagai, which Prince Mone thanks them for killing when he arrives shortly after. They tell him it wasn't them, and Mone explains about the Nagai invasion, and how the people are glad to see their friends arrive to help, even if it is with the bad news of Kiro's death.
However one of Mone's people explains that Kiro has returned to Iskalon, and it has been him hunting and killing the Nagai invaders.
The Nagai are building a tower, as Iskalon is in a key location for a base in invading the galaxy, and they have been taking Iskalonians to work as slave labour.
As they continue to speak, another group of Nagai attack, and although Luke and Lando are skilled opponents, the Nagai are using a sonic weapon which knocks opponents out, and cannot be parried by Luke's saber. As Luke slips out of consciousness, he sees Kiro attacking the Nagai and saving their lives before slipping away into the sea once more, however Prince Mone is captured.
Luke and Lando are confused by the sighting of Kiro, but determine they must rescue Mone, as the Iskalonian people are of a type of group mind, which means that if Mone decides to die in Nagai imprisonment, then the entire Iskalonian people may make the same decision, wiping the species out.
The heroes attack the Nagai tower, and free the Iskalonians, and are helped by Kiro who is seemingly shot in the heart by the Nagai leader, and then killed as the tower collapses.
The Iskalonians tell Luke and Lando that their help will be welcome in fighting the Nagai in the future, and that they will resist in the future as the Nagai will not find them unprepared again.
Shortly before they leave, Kiro visits Luke, explaining that he must remain behind and help his people fight the Nagai, and that Luke must continue to propagate the story that he is dead, especially to Dani, because he cannot be distracted from his purpose to defend his homeworld again. Luke agrees, and tells Lando to do the same, feeling far better with the knowledge that Kiro didn't die and Luke never let him down..

High Points : It's fairly nice to return to Iskalon once again, but there's nothing particularly new here. In fact we get a roll back of a number of the ideas that have been presented before. With the Iskalonians welcoming Luke and Lando, where before they'd asked them never to return, the Iskalonians seemingly easy to conquer now, where the Empire hadn't managed it before, as so on.


Low Points : Okay, lets start with the big one, Kiro's death, not only the reversing of a dramatic moment from a previous issue, but a fake out death in this issue. I like Kiro as a character, he's got a sense of nobility to him, and the fact that he accepted banishment from Iskalon to follow his dream of becoming a Jedi was really interesting.
Even his death was really interesting, forcing Luke to accept that training Jedi is something he's going to need to do, but he's going to lose people, and those losses must never be down to indecisiveness or reluctance to allow his apprentices to learn and grow as heroes.
But we get that snatched back now, Kiro never died, so that lesson can now be forgotten. Never mind the fact we don't actually get told how Kiro survived, as Kiro doesn't even know. And somehow he just managed to return to Iskalon even though he'd been abandoned behind without a ship, just because he heard about the Nagai invasion. He didn't think of letting the Alliance know so they could send forces to help, he just intergalactically hitchhikes his way home without being seen, and starts a guerilla campaign on the Nagai.

While it makes sense for ships to land there, I'm starting to find it somewhat odd that although the Iskalonians decided not to rebuild it, as offworlders were no longer welcome, the wreckage of Pavillion remains in use as a landing place for ships. In fact we never find out how the Nagai manage to land at all. If the Iskalonians were really committed to not allowing offworlders to visit, they'd have destroyed the floating platforms everyone seems to use, which would pretty much deny access to the world.

I'm also really not impressed with the weird group mind concept introduced for the Iskalonians in this issue. Apparently most Iskalonians (Kiro being one of the exceptions) tend to follow the "school" consensus for decisions, with their leaders like Mone, not actually making decisions, just indicating the way that the consensus is going, with everyone following this consensus once it is made.
Which is an interesting idea, but the idea that if the leaders are forced into a position where dying is the best option, then the entire people will fall into line and kill themselves I find extraordinary. As taking this concept to it's logical conclusion, is that if you can break just their leader into slavery, then you get an entire slave race, which makes the Iskalonians into an easily conquered and subjugated people, which in my opinion does them a disservice.

The conclusion of this issue saddens me as well, as since Kiro's death, we've seen Dani as a broken woman. Although I've not seen it mentioned elsewhere, but from what we see in the comics, Zeltrons find light side force sensitives extremely attractive and compelling. We've seen Leia with her group of Zeltrons males, Dani's obsession over Luke, and then falling for Kiro after Luke repeatedly made it clear that he wasn't interested.
We really see this in action way back in issue 77: Chanteuse of the Stars..., where Zeltrons flock around Luke and Leia almost on sight, something we don't see them react to anyone else with the same passion.
But the connection with Kiro has definitely broken her with his death, since then we've seen her moping around, barely speaking to people and barely reacting at all.
Yet here we get Luke and Kiro deciding that it's better for her to believe that Kiro's dead, than for her to come and distract him from defending his planet. That's all they see Dani as, a distraction for the man, rather than the capable individual we've seen her be in so many stories. It's a little bit depressing to think that they think of her in this way, and that they'd rather her continue to be broken in spirit and soul. . . .

So what do you really think ? : It's fairly well written, and we're continuing the storyline of the Nagai invasion, but the return to Iskalon isn't particularly well done, the turning back of Kiro's sacrifice is disappointing, and the whole thing is pretty forgettable.

Final Words : 6 issues to go until the end of the comic series, and the Nagai war is still building. I'm starting to be concerned that it's either going to be cut off abruptly by the ending of the comic, or that we're going to get a rushed and unsatisfying conclusion. Oh well, we'll just have to wait and see.