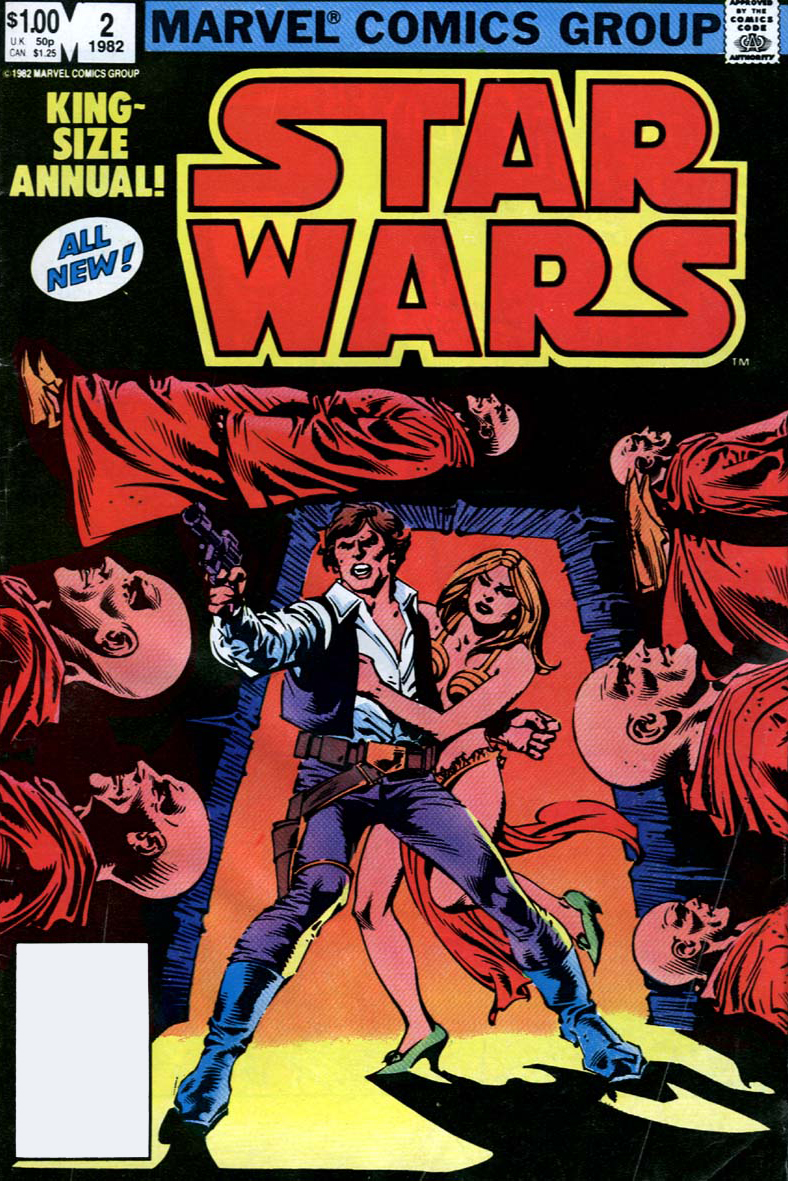 What is it ? : Set during the time between The Empire Strikes Back and Return of the Jedi (more specifically between Issues 66 + 67 of the Marvel series), and has Luke and Lando arriving on the world of Ventoonine.
Chased by Stormtroopers they duck into a side building which looks to be ruined but discover a golden statue to Han Solo within. A priest comes forwards and tells them that Han was their saviour, and they can hear the story from Han himself as it is recorded on memory stones which contain recordings.
They listen to the story of how Han and Chewbacca arrived on Ventooine looking for the rare and valuable Sansanna Spice, Han disguised himself as a traveller and headed into the capital city by himself, where he sees some guards bullying a priest who he rescues.
Heading into a local cantina, he asks about the spice, but this attracts violent attention as the inhabitants take him to be a sympathiser of the Satab. He flees, and leaps onto a passing wagon in an attempt to get away, but an explosive is hurled at the wagon and Han blasts it before it can explode. He then discovers that the wagon contains Chrysalla, Tieress of Ventooine, who Han has saved, earning the gratitude of the Satab.
He is taken to the palace, and during a banquet in his honour he realises that the Satab controls all of the Sansanna Spice mining on the planet, and he begins looking for a way of stealing some. He witnesses another assassination attempt, this time against the Satab, who uses the Shadesine, a gemstone like device to drain the life from the Monk attempting to kill him, leaving his body an aged and withered husk.
Han sneaks out of his quarters at night, but to avoid patrols ends up spending the night with Chrysalla, something the Satab witnesses using the Shadeshine, the same device that Han saw him drain the life from the monk. Chrysalla explains that the Satab is a temporary position, lasting only one year, while they wield the Shadeshine, which enhances their senses. After the year however, their senses have become so sensitive that they cannot survive any longer, so all of the past Satabs have entered suspended hibernation awaiting a cure being discovered.
In the morning that Satab takes Han into the spice mines on a tour, but engineers a situation where Han must fight an escaped beast, which he does, saving some of the miners. The monks who have been attempting to kill the Satab witness this, but are confused as to why this offworlder is a guest of the Satab, saving Chrysalla's life, but also saving peasant workers.
At a ceremony afterwards the Satab announces that Han is to be his replacement as the next Satab, and prepares to give him the Shadeshine, however he senses more Monk's have infiltrated the palace, and as he prepares to execute them, Chrysalla attacks with Han's blaster. Han decides to side with Chrysalla based on the fact she is pretty, and they flee. Han remarks he could have resolved everything if he'd gotten his hands on the Shadeshine, but she tells him that simply touching it once is enough to suffer the same doom as the Satab's.
The Satab catches up with them and they battle, but Chrysalla touches the Shadeshine, balancing the Satab's powers, until the Satab reaches his peak sensitivity, and attempts to flee to the hibernation chamber, but Han trips him, and the Satab is consumed by the power of the Shadeshine, crumbling away into dust and smoke.
The Monks are pleased that the planet has been freed from the Satab, and Han and Chrysalla kiss, but she tells him that she too will now suffer the same fate as the Satab's, so goes into the hibernation chamber to avoid her eventual destruction.
The Monks raise the statue to Han, and get him to record the memory stones, ending his story. However while Luke and Lando have been listening, the Stormtroopers they were fleeing have entered the ruined temple. So Luke records his voice onto the memory stones, and throws them into the hibernation chamber, the Stormtroopers follow the voice, and enter hibernation alongside the Satab's and Chysalla who floats next to them.

High Points : I do like the set up for the story, which I find remincent of other SF stories, such as the Firefly episode Jaynetown, and although simplistic, I did like the fact that the solution to Luke and Lando's situation was set up within Han's, with Luke learning about the hibernation chamber and the memory stones from that tale.

Low Points : First of all, when the Satab watches Han and Chrysalla together, he comments on Han's "admirable resiliency, great stamina and interesting morals"! Did he just watch the two have sex? I think that's what it's insinuating.

I'm also totally baffled as to why Chrysalla rushes off to hibernation? The Shadeshine is noted to give people a years enhanced abilities before they must seek the hibernation or be consumed by it. And she has just touched the Shadeshine only minutes before, so doesn't she have a full year before she is in any danger?

Also, what the heck is the Satab's plan? He's obviously not a nice guy, but does seem to be seeking someone quite remarkable to be the next Satab, which doesn't sound a bad thing. He even seems to be picking someone who has affection for the same girl that he does, therefore ensuring that she is protected. And he himself is due to enter hibernation in only hours. While cursing Han to the effects of the Shadeshine doesn't seem nice, it's hardly an evil of the usual Star Wars magnitudes.

So what do you really think ? : The Annuals have a high page count, and I'm afraid this time there's too many pages for the story to be told, and more unfortunately they've wasted these pages rather than explaining character motivation. For example why does Chrysalla turn against Satab, it seems to be because he's about to kill the monks who have infiltrated the palace, and given the gruesome way he kills, this would be understandable, unless of course you consider that these are the same monks which hurled an explosive into her wagon only the day before, in which case I really do want some reason why she turns against the man who has brought her out of poverty to side with the people who tried to murder her. . .

Final Words : This is definitely one of the worst Marvel comics I've read, the story is slow, full of plot holes, and feels like a generic SciFi story crowbarred into the Star Wars universe. Oh well, one annual to go.