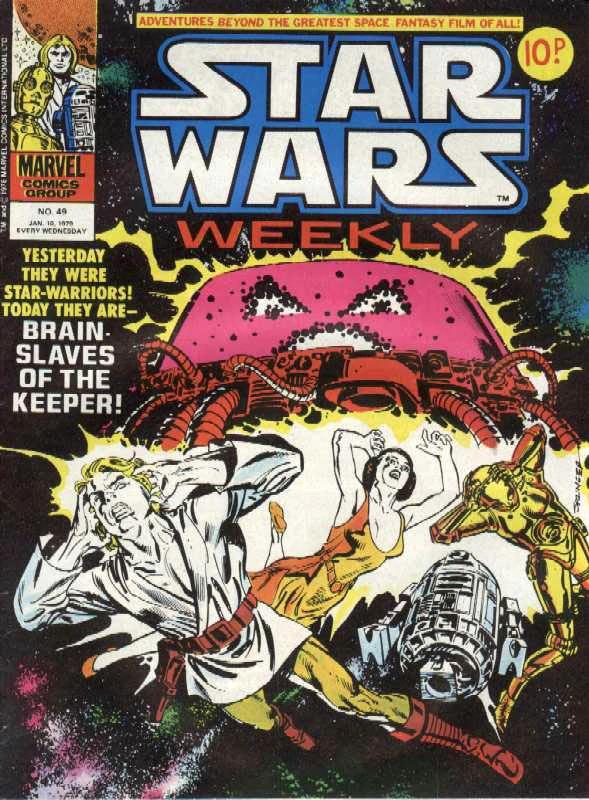 What is it ? : Part 6: Do you know what your children are?
As the heroes disappear, the Imperials who were about to attack vow to not leave the planet until they track them down.
Luke, Leia and the Droids have been teleported and find themselves in an underground cavern and try to discover their location. Four figures approach them, brightly haired and clothed children with glowing eyes, and the children reveal they have no love for the Imperial troopers, and that they have no names but are identified only by the powers they have, one who manipulates Fire, one who manipulates Wind, one who manipulates Rain, and the last who manipulates Earth.
As they talk, C-3PO alerts them to the fact that the Imperials have tracked them down.
Part 7: Caverns of Mystery
Luke engages his lightsaber, but the children use their powers to cause a diversion which allow them to escape, leading them through the tunnels to a much larger cavern which contains a massive computer.
The computer identifies itself as The Keeper, and is not happy that it's children have shared its location with Ordinary Beings, and it blasts the heroes with a beam of energy which they cannot resist.


High Points : Again with so few pages, there's not much story here, but what there is goes moves along quickly.
What I must have to complement however is the design of The Keeper, a massive computer topped with a glass tank containing energy discharges which resemble a face. It is large and imposing, and its design has stayed with me for 40 years, as I recognised it immediately.

Low Points : With the story moving along so quickly, there's not really time for it to make any sense. For example, the Imperials emerge into the caves only moments after the heroes teleported there. Did the teleport only move them into the next room? Or did the Imperials make use of teleportation technology themselves? The story doesn't tell, but certainly gave me the impression that this magical teleportation technology only has a range of 20 feet or so.


So what do you really think ? : Again, it's enjoyable enough, and definitely targeted towards children, introducing magical kids to save Luke and Leia.
I've also got to question the fact that the kids claim not to have names, but instead are referred to by their powers, so "The One who manipulates Fire!", "The one who can make it rain, even inside!", etc. Which are basically just names I'm afraid. . . Certainly Wookieepedia just calls them, Fire, Rain, Earth and Wind.

Final Words : I'm starting to regret reviewing these stories by the issue, and think that maybe I should have just reviewed the entire story, as the individual issues are just so short. But I've started now, and I'm nothing if not stubborn.