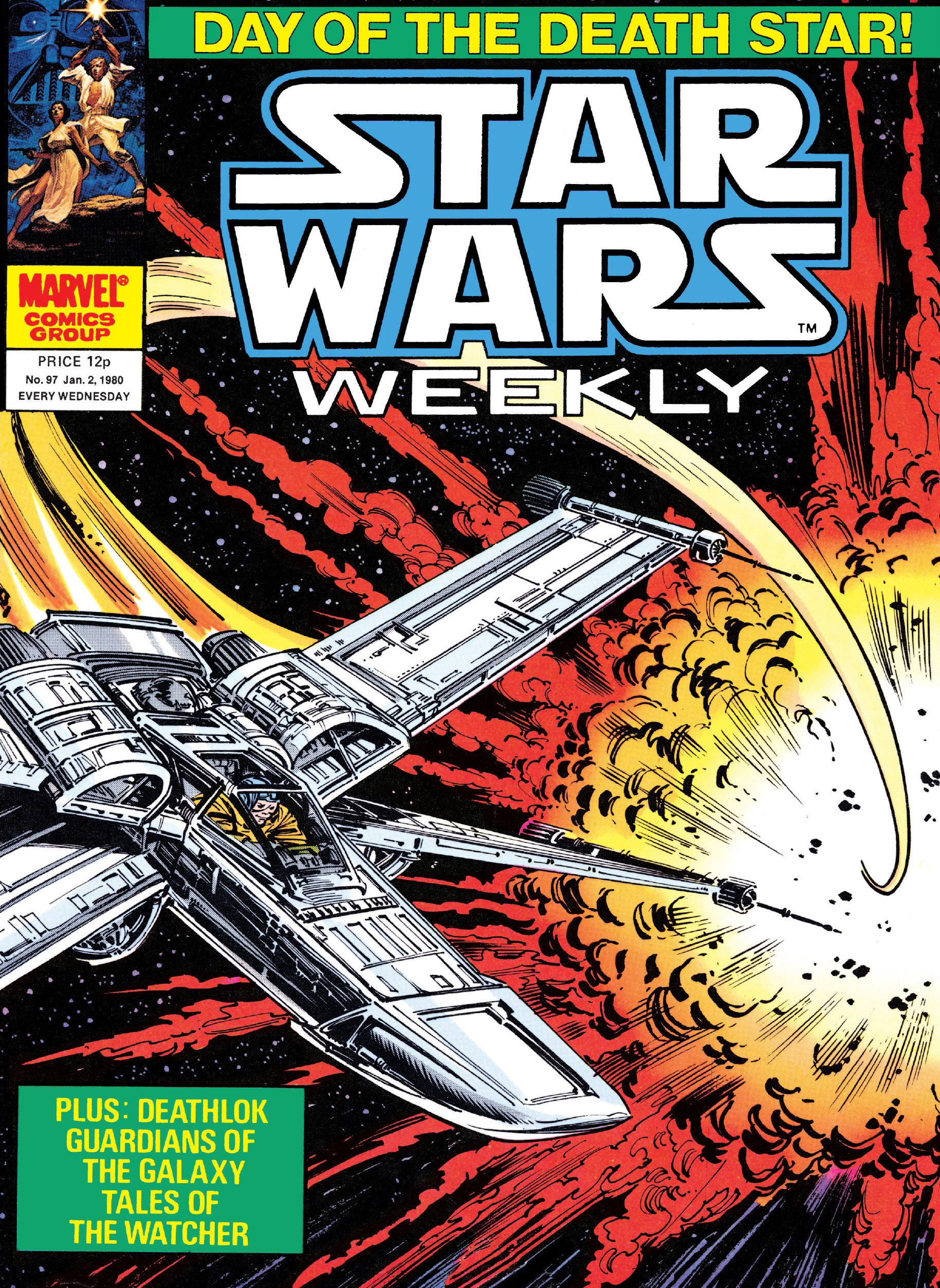 Star Wars Weekly 97: The Day After the Death Star Part 1

What is it ? :
Part 1: The Day After the Death Star
Luke Skywalker stands atop one of the Massassi ruins on Yavin IV, it is the night after the attack on the Death Star, and he is still too excited to sleep. He considers the day he's had, leading the attack on the Death Star, the award ceremony afterwards, and the part after that.
The party where Leia kissed Han, making Luke jealous, and then Leia kissed Luke, making Han jealous. Then the two of them helped Leia onto a table, so she could stand high enough to award Chewbacca his medal for his part in the destruction of the Death Star.
After thinking about all of this, Luke heads down to the hangar to examine his damaged X-Wing, and soon C-3PO and R2-D2 arrive, looking for him. Luke remembers that when he was still on Tatooine, going out for a fly in his T-16 would calm him, so loads R2 into the cockpit (as the droid socket is still damaged) and launches to let off some steam.

High Points : An interesting and quiet start to the story, I'm hugely impressed by the tone of this issue. It gives us a glimpse into Luke's thoughts, and how he's always dreamt of being a hero and flying into combat, but what does he make of that now that he's achieved his dream.
We also get to see Chewbacca awarded his medal finally, and somehow it both feels right that he should get the award as Leia is helped by the other heroes, but also somehow still a little racist that he wasn't given the award publically, instead shamefully awarded it behind closed doors in a private ceremony.
Finally, I'm hugely impressed once again at the accuracy and consistency of the Comics where it comes to technical information, Luke identifies his X-Wing as a T-65, perhaps the first place I remember seeing such information presented. Since it would have been easy for them to just identify it as an X-Wing, I'm really impressed by them using this extra information to help build the universe.

Low Points : Now this feels a little nitpicky, but the Awards Ceremony is made out in this issue to have happened the same day as the attack on the Death Star. Now while I accept that the Rebels would have been in a hurry to evacuate, so didn't have time to dawdle around. I always had the impression that the ceremony happens a few days later, enough time for R2 to get repaired, and for C-3PO to get a polish. But I suppose there's nothing which actually says that it couldn't have been the same day.

So what do you really think ? : A nice start to the story, and it's a quiet reflective start at that. While we get action in the form of Luke's memories of the Death Star battle, the rest of the issue is the celebration and a reflection of Luke's feelings about suddenly becoming a hero. We'll have to see where the story goes from here.

Final Words : Not really a High or a Low point, but something I felt I needed to mention, but the illustrations of the X-Wings throughout this issue are slightly odd. Whereas X-Wings in the original trilogy have a single engine on each wing with a circular air intake at the front, the wings as shown in this story have air intakes which when the s-foils are closed form a circle, but when the wings are open form a half circle.
Now this is a design used in the sequel trilogy, on the T-70 model of X-Wing, rather than the T-65's as used originally. Now, I'm fairly certain this will be due to the comic artists working from Ralph McQuarrie's original design artwork for the X-Wing (something I used for later versions of the X-Wing as well), but it's incorrect, so perhaps should be a nit to be picked. But then again, I actually prefer this design, so I'm happy to see someone else used it so long ago.