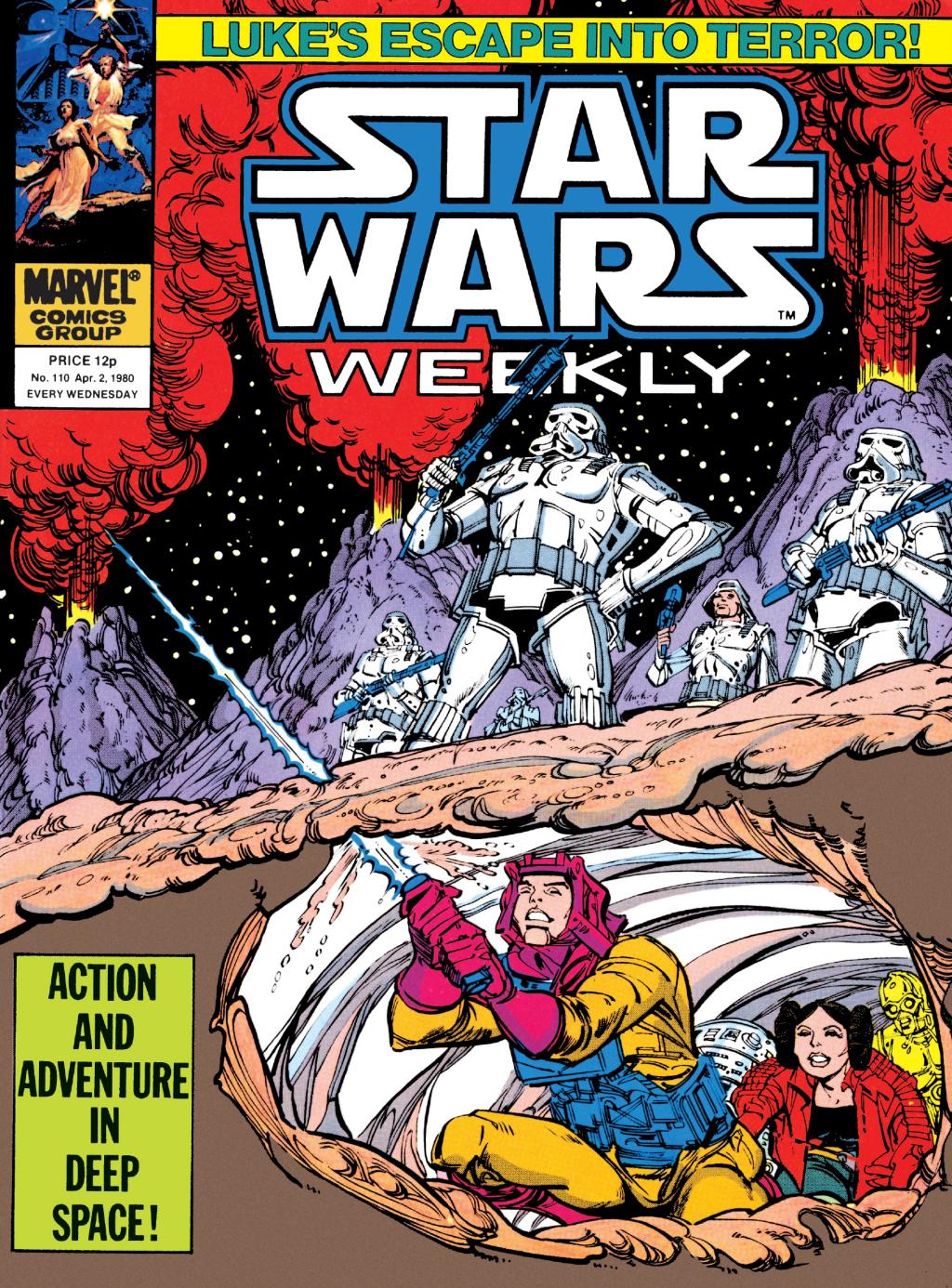 Star Wars Weekly 110: The Word for World is Death Part 1

What is it ? :
Part 1: The Word for World is Death!
Continuing from the end of World of Fire, Mici has been wounded by the damage done to the Starraker both when it was hit by fire from Alashan, but also during it's plummet from orbit. Leia is performing surgery at the direction of R2-D2, and Luke stands by to cauterise any bleeding with his lightsaber.
As they complete the operation, Luke collapses, and as he awakens, Leia tells him that is wasn't just due to the stress of the operation, but also because without power to recycle the air, the atmosphere aboard is turning toxic.
The Lava around them has cooled into rock, so Luke opens an airlock, and begins hacking away at the rock with his lightsaber, tunnelling his way to the surface. This creates a passageway upwards, and the stress and bad atmosphere has Luke nearly passing out, until he cuts through to the surface and feels fresh air.
But he can't recover for more than a few seconds before an armoured hand yanks him out of the tunnel and he finds himself facing off against an Imperial Officer, some Imperial Troopers and Stormtroopers.
They ask him who he is, and he identifies himself as Lars Dunestrider, but the officer is skeptical and asks him if the fact he is holding a Lightsaber means that he is a Rebel?

High Points : Again the tactic of putting the story as two parts gives the feeling that the issue is longer than it actually is, while providing some real feeling of movement forwards. So this time we get the nerve racking surgery on Mici, and then Lukes tunneling and climb out of the buried ship.

I was also really impressed by the way the issue talks about Luke's Lightsaber, as before he starts tunneling he mentions it seems to have an almost inexhaustible power supply. And then as he completes his tunnel, he feels as if the lightsaber is drawing power from him, directly from his soul. Given at the point in time when this issue was published, we didn't have any extra information about lightsabers, I find it fascinating to see the writer introducing the idea that perhaps the weapons are powered by their wielder.
This makes a lot of sense, that Jedi with their mystical abilities, would power their own weapons, which would make these weapons special and usable only by Jedi. A concept which hasn't held out over time, but an interesting one nevertheless.

And I really liked the idea they introduced of the air in the ship going bad as the power was off, it makes sense, and would have been easy for them to ignore, but a lovely little detail which helped me enjoy this issue even more.

Low Points : So we've got Luke and Leia kissing again, and Luke making some pretty lusty comments afterwards, which is pretty dodgy given their relationship as brother and sister.

And I wasn't hugely keen on the fact that they crashed into a Lava lake, and now only hours later, it's cooled enough into rock for Luke to cut his way through, and for him not to burn when touching it. Something I probably wouldn't have noticed when I was a kid, but felt unbelievable reading it today.

And the coincidental bad luck of Luke cutting his way out of the ship through rock to emerge exactly at the feet of a Stormtrooper I find annoyingly forced. I know that it's to add some action and danger at the end of the issue, and I can accept that the Imperials have come to investigate the ship they saw crash into the Lava field. But the fact that they're wandering around on the top of a recently solidified lava field, and happen to be exactly within arms reach of Luke as he emerges from his tunnel seems ridiculous. Although I suppose they might mention that they heard the noise of his tunneling, but at the moment it just seems like Luke has the worst of luck.

So what do you really think ? : A solid issue, and although there's not massive amounts of movement in the story (they operate on Mici, and tunnel out of the ship), what does happen is interesting and there's some brilliant background information which helps make it feel more substantial than just 6 pages.

Final Words : I'm not rediscovering any gems of stories with these Star Wars Weekly issues, but this longer tale is proving to be really interesting and definitely worth a read, and I'm not even halfway through it yet.