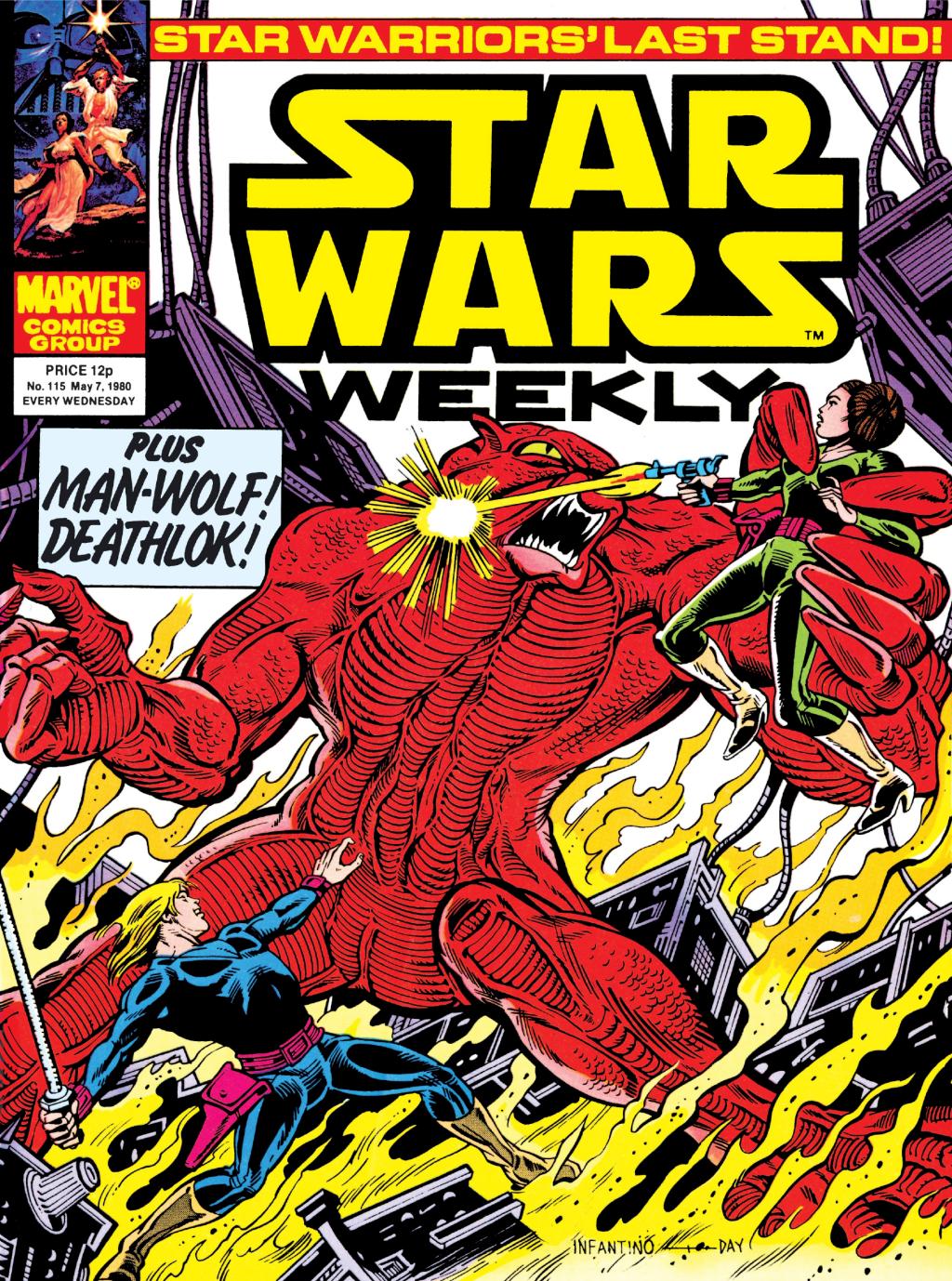 What is it ? :
Part 3: The Monster's Secret
Luke and Leia have found the control room of the city, and been ambushed by Ensign Lopaki, but warn him that they are being shut in as the door closes. He doesn't want to fall for a Rebel trick, but a glowing ball of energy appears, and the creature teleports into the chamber.
Realising that it's much smaller than it was before, Lopaki thinks that Grau and Anarine must have wounded it so opens fire, only to discover it is still as powerful as it ever was, and the creature quickly dispatches him with a blow from one of its clawed hands.
Luke engages the creature with his lightsaber, and his Jedi weapon actually seems to cause some harm to the monster, but as Leia fires her blaster at it, she realises that her missed shots are having far more effect than the shots which hit the creature.
As Anarine and Grau rush into the room, Leia tells them that the creature must be generated by the control panels in this room, so destroying them will harm the creature, so the three of them fire at the control panels.
The creature is effected, but not destroyed as much of the room is consumed by explosions from damaged control panels, allowing Luke to perform the perfect killing blow just as the creature grabs Leia.
The disruption of the creature causes much of the remaining machinery in the room to explode around the heroes, who a blown out of the chamber. . . .
Some hours later after digging themselves out of the city, Luke, Leia, Grau and Anarine return to the Starraker, and together with the droids and a somewhat recovered Mici, they repair the ship and launch into space, and make the jump into Hyperspace.
Leia invites Grau and Anarine to join the Rebellion, as they are honourable warriors who seem ill suited to service of the Empire, something that Grau says he much consider, but shortly afterwards, Luke detects the ships scout boat launching and they realise the two imperials are returning to the Empire.
This disappoints Leia, but she is glad that the technology on Alashan was destroyed, so they Empire cannot benefit from their knowledge, as she considers it was too advanced for either side to have, as it would have destroyed not only those who it was used on, but those who wielded the power as well.
Meanwhile back on Alashan, the lights in the city click back on, and the sound of ancient electronic voices can be heard laughing. . . .

High Points : A fascinating end to the story, with it split between the final battle against the creature as they discover it's weakness, and use it to their advantage, and then a dÃƒÂ©nouement, as the heroes discuss the events of the story and everything returns to normality.


Low Points : Okay my criticisms of this issue are more about what doesn't happen than what does, as I find this is a very satisfying conclusion to the tale.
Ensign Lopaki, after being built as a villain over many issues, is just killed by a single blow from the creature, serving absolutely no purpose in this issue at all. The creature teleporting to the room is the threat which Luke and Leia face, and Lopaki is just removed from the story as the annoyance that he was. A far more satisfying conclusion to his story, would have been for his death to have been the reason why the heroes realise the creatures weakness. Therefore adding some dramatic weight to his death, and turning his betrayal into a benefit for the heroes. But we don't have time for that, so smack, he's dead.

And Mici, the droids kept her alive aboard the Starraker, and I thought that she would serve some purpose at the end of the story, but no, she's not mentioned (although she does appear in one panel, so isn't totally forgotten) at the end at all. Again a satisfying use of the character would have been for her to use the Starrakers weapons to clear the rockfall and free the heroes from their underground tomb. But again no, we don't have time for that, so Mici doesn't really serve any purpose in the entire story at all.

So what do you really think ? : Well, although I think they just forgot about a couple of characters, whose storylines could have been tied into the final issue to make the entire thing a more cohesive whole. I still think this is an extremely satisfying conclusion to this story, and I've really enjoyed the whole 9 issues.

Final Words : Well, before the next story, Star Wars Weekly transformed into The Empire Strikes Back Monthly, greatly increasing it's page count and dropping a number of the other comic strips which the Weekly magazine had printed as well. So the next story will actually be a whole complete story with a much more substantial page count. So we'll see what effect that has on the story telling . . . .