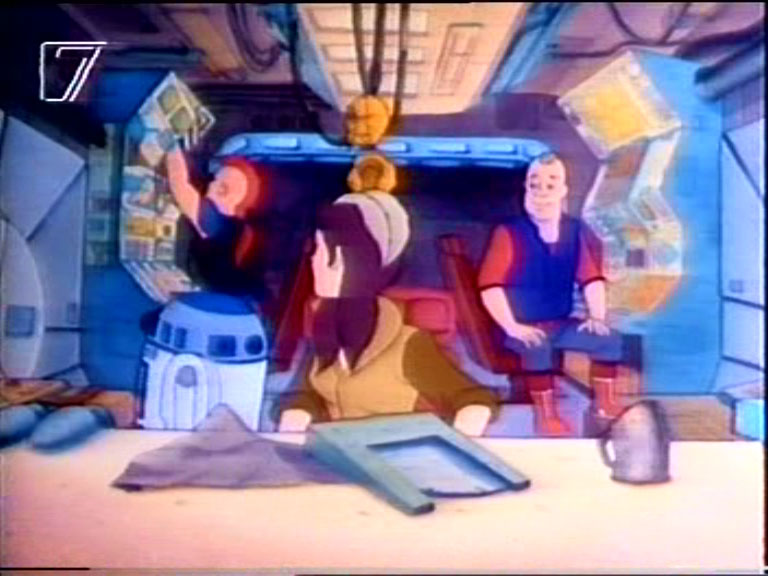 What is it ? : Star Wars: Droids: The Adventures of R2-D2 and C-3PO was the first animated series based on the Star Wars franchise. Released in 1985 as a saturday morning kids series along the lines of Thundercats or He-Man, it was designed to sell toys by keeping interest going in the Star Wars action figure line, which was losing sales after the movies ended with Return of the Jedi. The series detailed the adventures of C-3PO and R2-D2 years before they were dispatched by Princess Leia to find Obi-Wan Kenobi.

The first episode begins with C-3PO having been dumped in the deserts of Ingo by a former master, he looks for R2-D2 thinking he has been destroyed, but discovers him buried under some sand. The two wander through the desert when they spot some passing speeders, who stop for the droids, C-3PO sells his talents, but the occupants of the speeders, Jord Dusat and Thall Joben are more interested in R2.
Jord and Thall are racers, and want R2 to help them get their racing speeder working, and take the 2 droids back to their garage where they show off The White Witch, their racing speeder. However on their way they are chased by seeker drones, and Jord is forced to abandon his speeder in a crash suit and let it get destroyed.
Jord is later kidnapped by droids, and Thall and the droids are told about it by Kea Moll who has been watching them from a distance. She tells them she's been wanting a mechanic, and joins them in fleeing from the kidnappers in the White Witch.
Two aliens watch, one argues that the droids they used were useless, while the other who is their gang leaders son, tells him he trusts droids and machines more than people.
Kea, Thall, C-3PO and R2-D2 discover some caves which link with the gangs base, and scan a holding area. Meanwhile Jord is interrogated by the droid loving alien, who is revealed to be Tig Fromm of the Fromm gang, who wants to know what Jord knows about the Fromm weapon the Trigon One, which he intends to use to destroy the other gangs and take the Fromm's to galactic superiority.
Kea and Thall and the droids find a locked door which appears unbreachable, but Thall reveals that he was left a lightsaber by a former customer who never returned to reclaim it, and uses it to cut open the door. While Thall speeds through the tunnels to the base, C-3PO and Kea try to override the control systems, but a droid discovers them. C-3PO bluffs that they are maintenance, but the droid reveals that it's maintenance, so 3PO changes his bluff to them being security, but a security droid enters as well, but 3PO causes the two droids to crash and be destroyed.
Thall crashes through the wall of the holding area, and rescues Jord, and they collect Kea and C-3PO, they head to the exit, but find cruiser droids outside waiting for them. C-3PO tries to activate override controls which will cause the cruiser droid and sentry droids to fight, but can't get to the controls to open due to an armoured cover. So he gets a turret to shoot at him, and dodges out of the way which causes the control panel to be smashed open by the blaster fire.
The group speeds out of the Fromm base in The White Witch avoiding the sentry droid, cruiser droid battle, and pursuing seeker droids.
The two Fromm aliens discuss how much trouble they're in when the secret that they've been planning to destroy the other gangs gets out, as C-3PO, R2-D2, Thall and Jord board Kea's starship and fly off into space, with Jord claiming this was all his plan to get them to the Boonta Speeder Race.

High Points : Okay, let's be honest this really is 1980's kids stuff, so there's a lot of dated humour and childish behaviour from the characters. But it's actually pretty good, and I can imagine having liked it if I was a preteenager, although even at the time it was released I was too old to be in it's target market.
But, there's loads going on, the story never slows down, and there's loads of action. Pretty much a perfect 80's kids show.

Low Points : Now, Droids is a kids show, but wow there's only so many times that C-3PO can fall over, get oil on his face, have trash cans stuck on his head, and otherwise be treated like a 1920's silent comedian, but whatever that limit is Droids really pushes it.

And what's going on with the bad guys in this episode, maybe I missed something, as there's lot going on, but they kidnap Jord in case he knows their plans to build a superweapon and destroy the other gangs, and then reveal those plans in front of him. And then when he escapes, they're concerned their secret plans are now out and that they'll cause trouble with the other gangs.
Well, just don't go telling people your plans? And why did they even think that Jord knew their plans? Because he'd been in the desert? It's not really made clear.

Oh, I've got to mention the title music. Star Wars has amazing music, even when the movie isn't great, the music is awesome. So for Droids they threw out the orchestra's and John Williams iconic themes, and replaced it with one by Stewart Copeland of the band "The Police". Now Copeland has done some amazing soundtrack work such as iconic theme for The Equalizer tv series, and the music for the pilot to Babylon 5. But "Trouble Again" isn't one of his best, although it's surprisingly catchy in a really annoying way.

So what do you really think ? : Well, I expected it to be a lot worse, but it's pretty bad. The animation isn't great, the plot nonsensical, and it's targeted at far too low an age for it to be fun for adults to watch and enjoy.

Final Words : Well after spending almost a full year working my way through the Marvel Star Wars Comics, I didn't want to rush into another large project . . . so Droids suits me for the moment. 13 normal episodes and a feature length one, which I should get through in a couple of weeks, depending on Youtube having them all for me to watch.
I probably should have checked first.