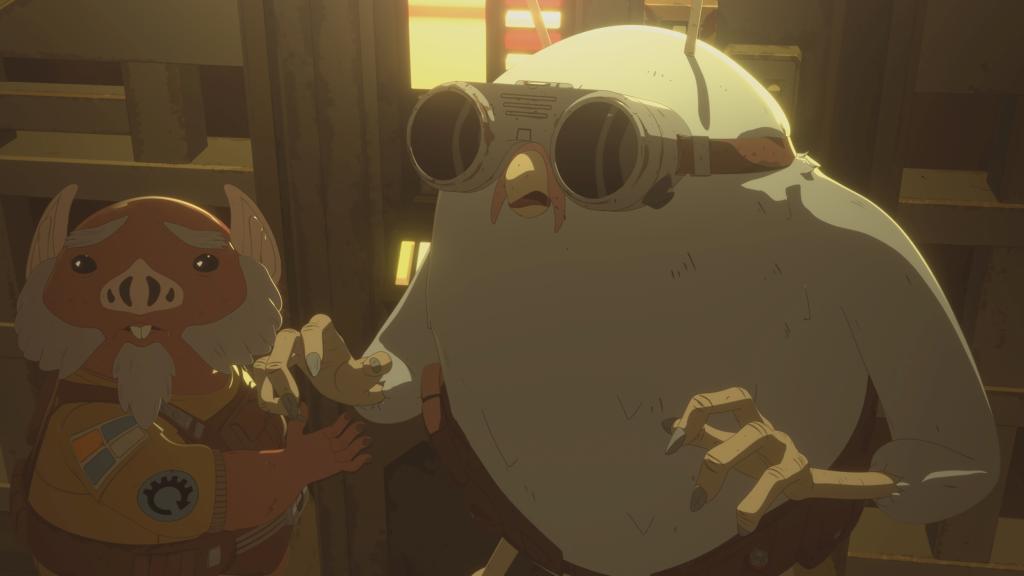 What is it ? : Kaz, Torra and CB-23 are taking Flix and Orka to Drahgor III, where Flix's family owns a fuel mining depot, where they hope to get fuel for the Colossus. As they enter the atmosphere, the shuttle they are using is thrown around by atmospheric turbulence, and Torra brings them down into a hard landing at the mining depot.
There they discover that the mine is now operated by Flix's cousin, Flanx, who took over the mine when Flix's uncle retired.
Flanx isn't happy to see Flix, claiming that he's only turned up after the mine has hit it big, to claim his share as the career he left the family for, as a Cantina singer, hasn't worked out. Flix discovers that the mine is more successful now, because they're mining deeper into the planet's crust, something they weren't allowed to do, in case they woke the dragons that slumbered there, an idea that Flanx mocks.
They come to an agreement that Flix can get the fuel only by helping out and earning it, as the mining equipment needs repaired. So Kaz, Torra, CB-23, Flix and Orka all accompany Flanx down the elevator into the planet's crust.
As the elevator descends, Kaz and Torra spot some movement in the fog surrounding it, and the Elevator takes damage from a falling tool box, shaken loose by earth shocks. The elevator begins plummeting with Kaz, Flanx and Flix aboard it, while Torra and Orka manage to grab ahold of the elevator track and begin climbing their way back to the surface.
Kaz, Flanx and Flix leap clear of the elevator before it is destroyed at the bottom, and Kaz has to take a different route to the two Gozza cousins and CB-23, during which he spots one of the Dragons in the mist, something that Flanx refuses to believe.
However as they repair the mining equipment, they are confronted by one of the Dragons, which has been awoken by the mining. They discover that the creatures are unaffected by blaster fire, but CB-23's light causes it to retreat. They repair the lighting around the mining site, while calling on Torra to bring the shuttle down into the mine to rescue them. Numerous dragons attack, but are driven back into the mine by the light, which Flanx seals up using the mining lasers.
Flanx accepts that Flix was right about them mining too deep, and agrees to never mine the depths again, giving him enough fuel for the Colossus in tanks strapped to the outside of the shuttle, and the heroes depart.


High Points : A fairly nice piece of fluff as the series avoids mentioning anything not seen in the movies so far, with some decent action and an antagonist who learns his lesson rather than needing to be defeated as so many in Resistance are.

Low Points : Although it makes the series more visually appealing, I have to ask why so much in the series has to glow. The dragon's eyes glow, which allows them to be seen through the mist, which is visually appealing, but doesn't make a lot of sense. Worse, Kaz has glowing panels on his gloves, which marks him out in the dark and misty mines, but when he's hiding from a dragon, does mean that the dragons should easily spot him.

And although it's a trope of television, the fact that Kaz reports seeing the dragons, but isn't believed by Flanx is annoying, there's only so many times you can do the whole, character reports seeing something unusual, and no one believes him, before it becomes old and tired.

So what do you really think ? : I still think that Resistance is treading water since they cannot reveal what the First Order is doing in the time period after The Last Jedi until Rise of Skywalker is released. But this isn't a terrible story, and having the Colossus slowly repair and refuel after the events of the last season does seem to make some sense. Although that said, the station is being hunted because it could serve the Resistance as a refueling base, although it itself was out of fuel, which doesn't make a whole load of sense.

Final Words : Well next episode is "The Relic Raiders", where they encounter a hidden Sith Temple, and the dangers it contains. Which doesn't sound that different to this episode to tell the truth.