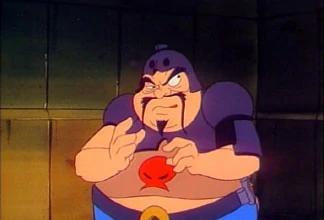 What is it ? : C-3PO and R2-D2 are preparing food for a royal function, King Mon Julpa has Lord Toda visiting to propose a peace treaty to unify the planet, however tensions almost come to violence, when the droids tumble into the room covered in cake, which breaks the tension as everyone laughs.
Meanwhile, Jyn Obah, the first mate of the pirate Gir Kybo Ren-Cha, sneaks into the palace of Mon Julpa to rescue his captain. He uses a mini-stunner on the guards and breaks Ren free. They head to the roof, where they ambush Jann Tosh and Jessica Meade, and kidnap Lord Toda's daughter, Gerin, although Jyn Obah is captured.
Ren arrives on the planet Bogden, and hides inside a crashed Star cruiser, contacting Lord Toda and arranging an exchange of King Julpa, and freeing his men, for Toda's daughter, Gerin.
However Gerin escapes from Ren, and is chased through the ship by a pack of vicious animals known as Sungwas. Jann, Jess and the droids finally arrive on Bogden, and meet up with Gerin, just as Ren's men arrive with the King. C-3PO shows bravery, by leading the Sungwas away from Gerin and Jann Tosh, losing an arm to the creatures.
The King has prepared for such an eventuality though, and opens ship's cargo hold revealing Lord Toda and a full complement of Tammuz-an warriors. A fire-fight breaks out between the warriors and the pirates, but ultimately the good guys win. Ren and his crew are captured once again.
Everyone returns to Tammuz-an where Mon Julpa and Lord Toda agree to sign the charter of peace. Jessica Meade announces that she is regrettably leaving the planet to return to Tyne's Horky. Jann and the droids wish her well.

High Points : Okay, I'm really stumped on this one, as I cannot even think of one thing which is good about this episode. Now don't get me wrong, it's not all terrible, it's just that nothing stands out as good at all, it's all just competent.
I suppose if I had to, I'd say that the moment in the episode where C-3PO leads the vicious Sungwas away from the heroes, and loses an arm to the creatures, does at least take advantage that he isn't organic, and does treat him as a machine.

Low Points : This episode is bland, that's it's main fault. There's nothing truly terrible about this episode, and while there's some problems, such as why do the R-22 Spearheads now have 2 seats, when they've reliably been shown as single person fighters in the past. And it's never really made clear whether the Sungwas are Kybo's guard animals, or whether they're natural to Bogden, and he's just managing to avoid them.
It's just a matter of things happening, without the plot sensibly leading you through things. For example, it shows Lord Toda arresting King Julpa (although he seems to be referred to as Prince, but I'm sure he became king 2 episodes ago), but then they're allies later when it comes time to spring the trap on Ren. While this might make sense if we were seeing things from Ren's point of view, that Toda and Julpa arrange a fake arrest. But it's only us as the viewer seeing this, so it's just a fake out, as there's no reason for Toda to have done this.

So what do you really think ? : This episode is just so bland and mundane it just bores. I have to admit I had to rewatch parts of the episode 3 times to get all the action, as my mind just started drifting off and I lost my attention, and I still think I probably missed some stuff. A bad sign when I can't even keep paying attention for 20 minutes because it's so boring.

Final Words : Saturday morning cartoons of the 80's were usually over the top and ridiculous, but I never remember them having this level of lack of attention paid to them. Oh well, at least I'm more than half way through the series all ready.