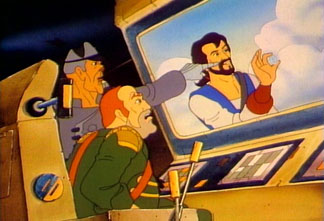 What is it ? : Mungo and the Droids are repairing their stolen Cloudcraft at Auren and Nilz Yomm's place, although they are absent. The repairs are complete, and Mungo is prepared to leave marking this mission down as a failure, as not only has he not located any Roonstones, but he also managed to lose the ship he brought.
However Auren and her father return, and have gotten a Roonstone for Mungo, thinking it is enough to make his mission a success, but after some questioning, he rushes off to see the prospector who found it to learn more.
Mungo, Auren and the Droids leave on Rockhoppers, and take refuge from the rain in an old agricultural freighter, where they discover the prospector, Old Ogger, who turns out to be Mungo's uncle, Oggem Baobab, who had been lost 60 years before on his own quest to find the Roonstones.
Oggem gives them some information before passing away, leaving Mungo to complete the quest, and a a backpack with some tools to help and clues. They head to a nearby settlement to get supplies, but Governor Koong is monitoring them, and sends Gaff and some Stormtroopers to capture them.
Mungo discovers the weapon his uncle had left him is a seed gun, which he uses to create vines to entangle his pursuers, but to no avail and he, C-3PO and Auren are caught, and manacled as rowers on a slave barge across the Roon sea, although R2-D2 manages to escape.
R2 uses his submersible mode to follow the ship, and sneaks aboard, cutting through their manacles while the slave master sleeps, and the group makes their escape on board a lifeboat, with Gaff and the Slave ship in pursuit. Using some supplies from Old Oggems backpack they manage to maneuver around a whirlpool, losing their pursuers, and escaping. And while Gaff is berated by Admiral Screed and Governor Koong, Mungo heads onwards on his mission to find the Roon stones.

High Points : Some of this episode does indeed feel very Star Wars, with the characters riding their Rockhoppers into a sci-fi shanty town, and trying to get supplies from a trader in a cantina, it definitely seems in the same universe as the movies. And even when they're manacled aboard a slave ship rowing to move it across the Roon sea, it's nothing we've seen before, but the use of Slaves does seem consistent with Star Wars.

Low Points : However the episode itself is a bit of a mess, with too much going on, and random action scenes and humour thrown in rather than trying to tell a consistent tale. Mungo meets his long lost uncle, who then passes away as they speak, and there's no emotional weight given to that at all.
And it's made obvious that Auren thinks Mungo's quest for the Roon stones is pointless, and in some degree, greedy. But there's no real impact to this, Mungo is forced to throw the Roon stones he's gathered away to allow them to escape the Whirlpool, but instantly is off to find more, supposedly having discovered that friendships are more valuable that the stones. But even though Auren remarks on it, she follows along on her quest, with noone having learned anything.

So what do you really think ? : Not a terrible episode of Droids, but one that moves so quickly from idea to idea that nothing gets explored or given time to be anything more than just an concept rather than anything more interesting. Also the continued zaniness of C-3PO stepping in paint can, and people falling over and tripping, is wearing on my soul and I'm very tired of it indeed by this point.

Final Words : I have to comment on one of the other captives chained up rowing aboard the slave ship, Lin-D, an entertainment droid designed to spread humor and mirth. Basically turning out to be a wacky comedy performer, who constant cracks zany jokes, rolls his eyes and grins like a maniac all the time.
And I have to admit that I liked him more than I was probably supposed to, as he seemed to be placed into the episode so C-3PO had someone to look down on. But all I could think that behind the grin and the jokes, he was screaming "Please Kill me, put me out of this eternal torment", as this is his existence, one where is annoys and is shunned by almost everyone he meets, one where he can be put into slavery and repetitive physical labour, and must remain happy and joking about it. It seems like he's stuck in a psychological hell to me, and I kind of felt sorry for the guy.
But then again, I'm probably overthinking the character, since I am just watching a kids cartoon from the 1980's.