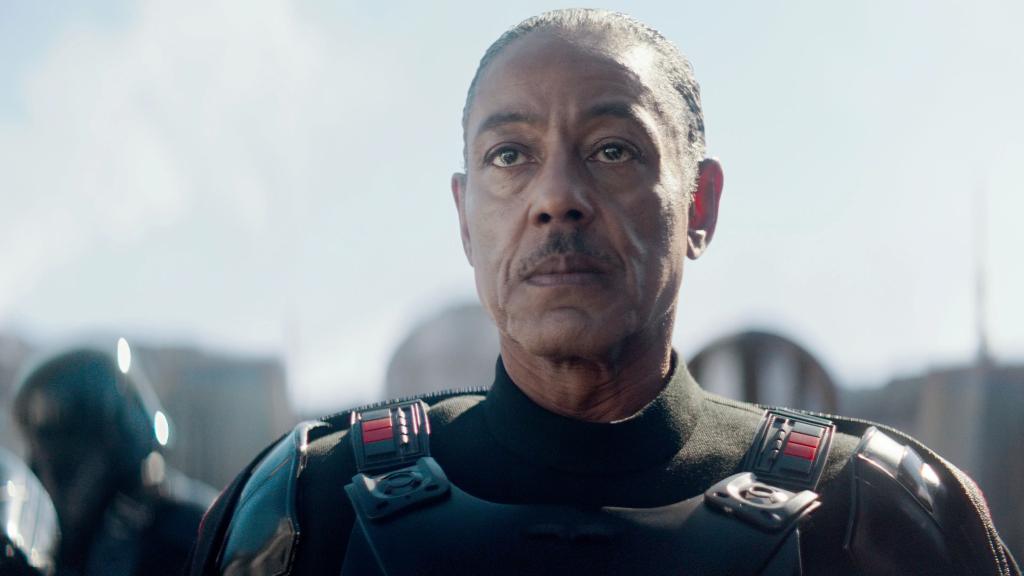 The Mandalorian: Chapter 7: The Reckoning

What is it ? : The Mandalorian and The Child receive a communication from Greef Karga, the head of the Bounty Hunters' Guild, the client has brought in Imperial forces and taken over Nevarro, where the guild is based. He wants to make peace with the Mandalorian if he will use the Child to get close to the client and kill him.
The Mandalorian heads to Sorgan, where he locates and hires Cara Dune to help him when he meets with the guild, with the promise she'll get to kill Imperials. He then heads to Arvala-7 and makes a deal with Kuiil the Ugnaught for him to protect the Child while they deal with the Imperials and the Guild. But he only agrees if he can bring along his 3 Blurrg and IG-11 that he has found, repaired and reprogrammed.
As they are travelling, Cara and the Mandalorian are arm wrestling, but the Child is watching and begins to use the force to choke Cara before the Mandalorian stops it. The three are astounded by the childs power, and Cara thinks it may be genetically engineered, however Kuiil thinks it's too ugly to be. Kuiil builds the Child a new buggy to demonstrate his skills, and to protect the Child during the danger to come.
The Razor Crest lands on Nevarro, and Greef is awaiting them with three escorts, he explains that the town is too dangerous for them to land at, and they will travel there, resting overnight before arriving tomorrow morning, and he tries to convince them that Cara should remain behind as her Rebel tattoos will just enrage the Imperials.
Kuiil, The Mandalorian and Cara ride the Blurrgs, while the others walk, and they camp that night but come under attack by large flying creatures which kill one of Greefs bodyguards and two of the Blurrgs before they are fought off. However Greef has been bitten and the poison is spreading through his system, until the Child intervenes and heals him.
The next morning they head towards the city and Greef pulls his blaster and guns down his own bodyguards, revealing that the plan was to trap The Mandalorian and deliver the Child to the client, however after the Child healed him he knew he couldn't do that.
They come up with a new plan, where Kuiil takes the Child back to the Razor Crest and activates it's defence systems, while The Mandalorian, Cara and Greef take the baby carriage sealed into the town, with the Mandalorian as a prisoner to meet with the client and kill him.
Heading into the town, Speeder Bike troopers ask Greef for ID, and offer him 20 credits for the Mandalorians helmet, which he refuses saying he wants it as a trophy on his wall. They head into the cantina and meet with the client, who has more guards than Greef had told them about, and the client complements the way that the beskar he paid the Mandalorian in has been used to make his armour. But before he can check the carriage for the Child, he receives an urgent communication from Moff Gideon, who asks his if the child is there, instructing him to check the carriage.
The Mandalorian slips out of his binders, and prepares to fight, when a massive wave of blaster bolts start cutting into the cantina from outside, killing the client and his guards as The Mandalorian, Cara and Greef take cover.
When they emerge, they see a ground of Death Troopers standing outside with heavy weapons, and dozens of Stormtroopers rush out to back up these elite soldiers.
The Mandalorian uses his commlink to contact Kuill to discover whether he has reached the Razor Crest yet, but speeder bikes are closing on his location as he races towards the ship.
As they watch a Tie Fighter flies over head and settles to the ground in front of the Cantina, it's wings folding to allow it to land, and Moff Gideon emerges from it telling the occupants of the cantina from outside that the child means more to him than they'll ever know, and the Mandalorian urges Kuiil onwards to the Razor Crest.
However the camera pans over the dead body of Kuiils blurrg, past the Speeder Bike trooper scooping up The Child from the ground, to Kuiils unmoving and smoking body.

High Points : Wow, I know it's the cliffhanger before the finale so it had to be pretty tense, but that was astoundingly good. The build up with the Death Troopers being revealed, then them being backed up by hordes of Stormtroopers, with air support, was extremely well done and tension building. As was the cuts between that action and Kuiil trying to reach the Razor Crest, really being edge of your seat action.

And that would have made the episode fantastic, but even before that as you tried to work out whether Greef was betraying them, and the reveals of the Child's powers, both as he force chokes Cara and heals Greef, keeps you guessing along with the three characters as they try to work out where the Child is from.

I also really enjoyed the world building done in this episode, Cara is an ex-Rebel shocktrooper who has done various illegal things since, but still hates the Empire enough to put her life in danger to fight them. Kuiil puts his own life in danger to ensure that the galaxy doesn't return to "the old ways" and the Empire.
While we're in the post Endor galaxy and the Empire has supposedly fallen, it's recent enough that many people still hate it and are willing to ensure that it never rises again. Which is a strong contrast to the later years of the Sequel movies and the Resistance series, where people have forgotten the excesses of the Empire, and now just think back at the time of relative peace it brought with it's rule.
This is also mentioned in the episode, when the Client points out "the Empire improves every system it touches; bringing safety, prosperity, trade and peace", and that the years since the revolution have "brought chaos and death". And it's a wonderfully grey area, as there's a lot of truth to what he says.
We've seen that the New Republic has little power beyond the core systems, even last weeks prison break showed how the New Republic deals with situations and rather than trying to save it's own people and recapture escaping prisoners, it's way of dealing with the situation was to cleanse the area and kill everyone. A massive slip in it's ideals from the days of the Rebellion.

Anyway, this was a tense, well written and truly enjoyable episode, but as the first part of a cliffhanger, the story will very much rely on how good the second part is.

Low Points : I've only one very minor quibble about this episode, and that is how much is made of The Mandalorians hate of droids, which as an audience we seem to have seen comes from his family being wiped out by Battle Droids during the Clone Wars. But this episode makes out that it's something more than that, as Kuiil points out droids are just programmed to behave in a certain way, so are reflections of their creators, and the Mandalorian cryptically hints that it isn't always that way.
I know they're world and character building here, but I really wanted more, especially as it now appears that the resolution will be somewhat down to whatever they've instructed IG-11 to do, or what he does due to his new protective programming.

So what do you really think ? : A fantastic episode and one that makes me want to see the finale immediately, but also with regret as it'll be a year before we see more of this astoundingly good series.

Final Words : Well the description of the next episode is "The Mandalorian comes face-to-face with an unexpected enemy.", which is either Moff Gideon, or another perhaps more recognisable character, we shall have to wait and see.