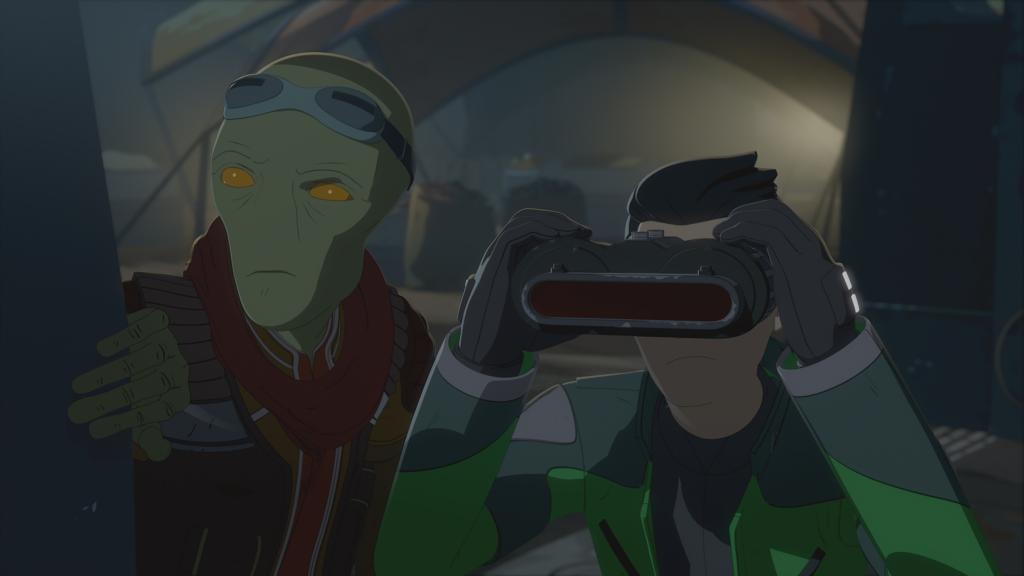 What is it ? : Kaz and Norath have escaped the bounty hunter Ax Tagrin, and have concealed themselves in the town, as they discuss that Yeager and Synara haven't been in touch. When they see him meeting with Commander Pyre and First Order Stormtroopers and handing over the pair along with CB-23, but Pyre isn't happy as instead of the Resistance Agents he told them he had, he only has handed over a collaborator and a pirate.
Tagrin says he'll have the others soon, but Pyre tells him if the First Order gets them first then he'll not be paid.
Kaz contacts the Colossus, and Commander Doza informs him that the ship is hiding inside the atmosphere and magnetosphere of a nearby planet, and if discovered will be forced to hyperspace away and cannot send help.
Kaz then comes up with a plan to steal the armour of two First Order Stormtroopers and disguise themselves to sneak into the First Order camp and rescue their friends, however Norath thinks it's a stupid idea, but lacking any other agrees to go along with it.
They succeed in knocking out two Stormtroopers although Norath almost gives the game away, and in disguise they enter the camp where a group of First Order Troop Transports have landed, and the First Order have set up an outpost to search the planet for the Resistance spies.
Ax Tagrin monitors communication frequencies and picks up Kaz and Norath speaking over their Stormtrooper comlinks, and discovers the location of their ship, concealed just outside the town.
Kaz and Norath encounter Commander Pyre, but Norath gives the game away, and Kaz is forced to stun the officer, and the two head for the Transport where Yeager and Synara have been interrogated, rescuing them, but before they can rescue CB-23, they discover he has freed himself.
Tagrin breaks into their shuttle, and opens a communications channel to the Colossus, which responds allowing him to locate the vessel, which he passes onto the First Order.
The Colossus detects the First Order moving to intercept it, and leave the atmosphere and make the jump to hyperspace, much to the chagrin of Torra and Hype who want to help their friends.
Kaz, Norath, Yeager, Synara and CB-23 head back to their ship where they are ambushed by Ax Tagrin, but CB-23 sneaks onto the ship and takes off, smacking Tagrin to the ground and then blasting him with the ships engines while the rest board the vessel.
As they take off, the First Order scrambles Tie Fighters against them, but the Aces arrive and engage the Ties, covering the transport until it can achieve orbit where the Colossus comes out of Hyperspace and they all land before the vessel jumps out again.
Neeku is pleased to see his friends safe and sound, and comments on Kaz wearing Stormtrooper armour once again, a plan which rarely works. But Norath sticks up for him, saying the armour saved all their lives, but Neeku says he has never seen stormtrooper armor protect anyone from anything.

High Points : Another middling episode of Resistance, but one that benefits from not a lot going on. You see normally the Star Wars animated series all try to pack in massive storylines into just 20 minutes running time, but this episode focuses on just Kaz and Norath rescuing their friends. And that more limited focus allows them to detail with the situation better and spend more time building tension and making the plot make more sense.

I also liked the fact that Kaz seemed like the seasoned veteran when working with Norath, who was the one to make mistakes and almost ruin their plans. However I'd have liked it even more if one character didn't need to be incompetent to provide some extremely weak humour.

Low Points : My major sticking point with this episode was Commander Doza and the Colossus's behaviour. Why do they need to hang around and wait for Kaz and the others? Why can't the Colossus leave and and the Ace's remain behind to wait for Kaz and the others with a prearranged rendezvous? In fact, why can't they just give Kaz and the others a rendezvous, and wait there? Or better yet, combine the two, tell Kaz to meet up in another star system, leave the Ace's there waiting for him with coordinates for a third Star System where the Colossus would be waiting, which would pretty much eliminate all danger to the Colossus itself!
It doesn't seem overly complex, just telling Kaz, "meet us in the 'X' system", which is made especially bad as it's pretty much what Torra and Hype are suggesting.

Apart from that, the animation isn't great, in parts looking worse than it normally does, with Norath and Kaz looking stretched and deformed in one particular scene, and the big action fight between Tagrin and the heroes looking pretty darn poor. Perhaps it's just something I've not noticed before, but this episode did look shoddy and poorly done even compared to the normal style of Resistance, which I'm not a massive fan of at the best of times.

So what do you really think ? : While not a total disaster of an episode, it's not very good, and while I didn't hate watching it, I found little to commend in this episode at all.

Final Words : Next week we've got "The Mutiny" where the pirates apparently try to steal the Colossus, although I'm not sure why they would bother as they seem to have been happy enough living there for the past six months, and seem to have no idea how to maintain the vessel (or else maybe they'd have been helping out instead of Neeku having to do it all himself), guess they're just going to be stereotypical bad guys once again.