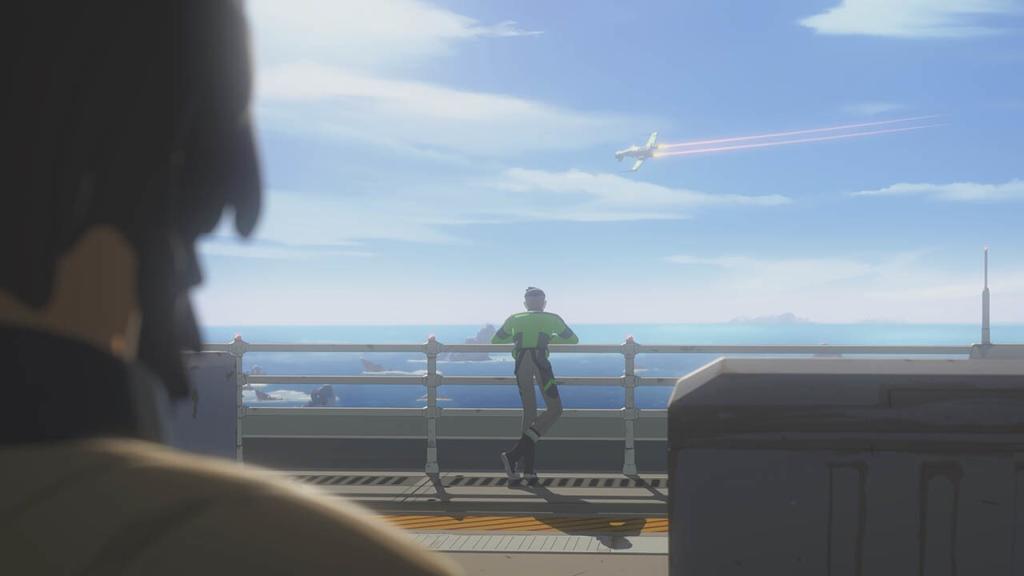 What is it ? : Captain Doza and Yeager are giving the Queen of the Aeosians a tour of the Colossus, when Yeager spots Kaz watching the Ace's practicing racing over the seas of Aeos Prime. Yeager asks him what's wrong, isn't this what he dreamed of being, one of the Ace's? But Kaz expresses that he can't walk away from the Resistance and fighting The First Order, and that it is time for him to leave the Colossus.
He contacts Norath Kev and arranges to rendezvous with the Resistance, which Norath tells him needs all the good pilots it can get.
Meanwhile on Commander Pyres Star Destroyer which is launching Probe Droids to find the Colossus, Tam is looking forlornly into space, and tells Jace Rucklin that she can't wait to get back to piloting.
Kaz prepares to leave, and Yeager gives him the Fireball to take with him, telling him if he looks after the old ship, it will look after him, and various of his friends visit to say goodbye, Neeku is in tears, and Torra is angry at him for abandoning the Ace's, but they all understand what he is doing is the right thing for him.
He takes off with CB-23, and while plotting course to the Resistance, he is spotted by a Probe Droid, and engages it in combat, destroying it, but damaging the Fireball. He reroutes power to reboot CB-23 who was also damaged, who then rolls around the outside of the fighter making repairs, until they are able to start the engines again, and Kaz limps back to the planet to warn his friends that the First Order have located them.
He crash lands onto the deck of the Colossus warning Captain Doza and Yeager that the First Order are coming, as the Resurgent Class Star Destroyer comes out of Hyperspace and launches fighter and bombers as the Ace's scramble in defence of the Colossus.
Captain Doza tells the Queen that they will leave, and the Queen orders her people to defend the Colossus as it retreats, and Yeager tells Kaz to take his personal fighter, this once only.
The combined forces skirmish above the Colossus as it slowly rises towards orbit, it's shields taking a battering from the Star Destroyers weapons, until Kaz realises that the Destroyers weapons are more of a threat and leads an attack on the Destroyer itself.
Tam flying for the First Order spots Yeagers fighter and holds off attacking, but realises that from the reckless piloting it must be Kaz, so falls in behind him as he launches torpedoes at the bridge of the Star Destroyer. Tam instead of firing at Kaz, instead fires at the torpedoes, saving the bridge of the vessel from destruction, and allowing Kaz to escape, as the Colossus reaches orbit and their forces retreat aboard and it makes the jump to hyperspace.
The Aeosian Queen orders her people to retreat to the deep sea, away from the weapons of The First Order, and Tam awaits disciplinary action for not firing on Kaz, only to find herself promoted for saving the Commanders of the ship and it's bridge.

High Points : A lot of really solid action in this episode, with Kaz's skirmish with the Probe Droid being entertaining, but the actual battle around the Colossus being the highlight of the episode, with the Ace's supported by the forces of the Aeosians, who leap from their flying mounts onto the First Order vessels to attack them with their weapons, in a most entertaining fashion. These scenes could have looked silly, but actually worked, with the Aeosians working like smaller predators bringing down large prey, and they lept onto the ships and slashed their hulls with their vibroblades.

We also get the first view of First Order Tie Bombers, with more aerodynamic styling, these look like ground attack vessels, and are a pretty original addition to the Tie line, which the First Order has generally just used updated versions of classic Imperial fighters which don't look particularly different to their ancestors.

Low Points : I've got to question Yeagers speech to Kaz, asking him why he's not happy as being an Ace was what he always wanted? Am I getting it totally wrong here, but that's not what Kaz wanted at all. He always wanted to fight alongside the Resistance, abandoning his career with the New Republic to join Poe Dameron in the Resistance. He liked the Ace's, and felt he deserved a place amongst them, but at no point did he ever really appear to want to be a racer more than that.
So rather weirdly Kaz's decision to leave the Colossus is completely in line with his established character and history, and the fact that none of his friends seem to recognise this initially either shows what a good spy he's always been to hide his motivations, or how little attention they actually pay to his desires.

The show tries to show us some more of Tam's redemption, by her not wanting to go after Yeager when she first believes it's him flying. However she once again burns through that good karma by going after Kaz when she recognises that it's him flying instead, and even though she hesitates to fire, it's certainly possible that she is evaluating whether saving the ship is more important than just taking down an enemy combatant, so would be fine about killing her once comrade.

Finally, I've got to comment that while this and the previous episode have been building on the Colossus finding a home, and Kazuda ending up returning to the Resistance. But for all the goodbyes said in this episode, this doesn't happen, and it ends up with everything returning to the status quo, as the Colossus escapes into Hyperspace again (exactly the same way it's done every other episode this season).

So what do you really think ? : Wow, two good episodes of Resistance in a row, even though they could possibly just be considered to be a two parter, as they both deal with the Colossus's short stopover at Aeos Prime.
But the show has grown a lot, and these were actually entertaining and enjoyable episodes of a series which I'd once completely written off, and would recommend anyone who gave up on this series to give them a try.

Final Words : So, there's two episodes remaining until this series reaches its end, with the next one being titled "Rebuilding the Resistance", which should be interesting.
I hope they're going to bring Poe Dameron back into the series, not that I've particularly missed him, but he helped launch the series, so it feels as if he should be there to tie it all together at the end, and this seems like the perfect episode to do it in.