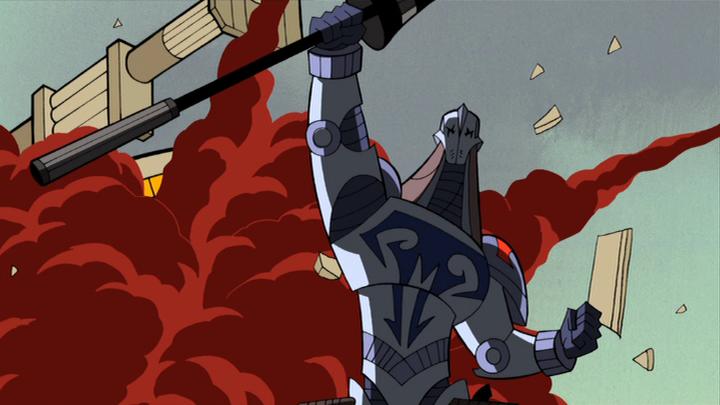 What is it ? : Meanwhile in space Anakin is leading his forces from his modified Aethersprite Jedi Starfighter, but we don't spend long with him at all. On the surface the Clone Army is assaulting the city, and their SPHA-T artillery is blasting the city, leveling buildings and clearing a path into the city.
The Muun's who are commanding the defence of the city, notice that their defensive cannons have been disabled and blame it on the Clone Artillery, rather than the Arc Troopers who we saw take it out last episode. They complain to an armoured figure standing nearby, asking why Dooku bothered sending him if all he's going to do is stand around, and he begins to choke the Muun.
We see ranks of IG series droids sitting on speeder bikes carrying lances, and the armoured figure, Durge takes his place at the head of his forces.
The speeder bikes race through the city, and charge the Republic forces, and the speedy droids take out hordes of Clone Troopers, and Durge himself lances a AT-TE, lifting its front clear of the ground and it explodes.
The Droids carve their lances along the sides of the SPHA-T Artillery causing massive amounts of damage, and they plant explosives causing them to explode as Durge lifts his arms in victory.

High Points : It's really fast moving, and we get introduced to Durge as a powerful and dangerous part of the Separatist forces, and although frightfully silly as I'll discuss below, the use of the Lances and Speeder Bike IG Droids is different and excellent to watch as they shoot past the camera, taking out clone troopers in a flash.

Low Points : The moments of Anakin at the start of the episode made me think that the episode was going to focus on him, but that appearance was basically pointless and in episodes as short as these, we don't have time for pointless.

And as mentioned above, the use of IG Droids riding Speeder BIkes and armed with lances is kind of cool looking, but totally ridiculous, as no matter the speed of a Speeder Bike, it surely can't be faster than a blaster bolt, especially the swarms of shots the Clone Troopers have been shown to be unleashing in this series.
And the ridiculousness of this combination is shown worst by Durge himself when he charges a AT-TE, lifting its front legs clear of the ground as his lance pierces
its belly and causing it to explode.
Even if the weapon is enhanced to cause extra damage, the fact that Durge is lifting a large walker clear of the ground with one arm, and even if he's strong enough to do that, he's riding a speeder bike. Therefore apparently a Speeder Bike can lift a AT-TE walker, which seems unlikely to me.

So what do you really think ? : While it's a bit silly, I enjoyed this episode, and Durge is really quite interesting, his armour heavier but reminiscent due to it's paint job to Mandalorian armour. And the Speeder Bikes and Lances are visually interesting and great to watch.

Final Words : I'm looking forwards to the obvious Obi-Wan vs Durge fight which must surely be coming up, but Anakin has so far been dreadfully underused, and at the halfway point of the first season we've still got a lot of the clips from the first episode to still be seen, so Yoda, Kit Fisto, Mace Windu and a bunch of other Jedi remain to unseen so far.