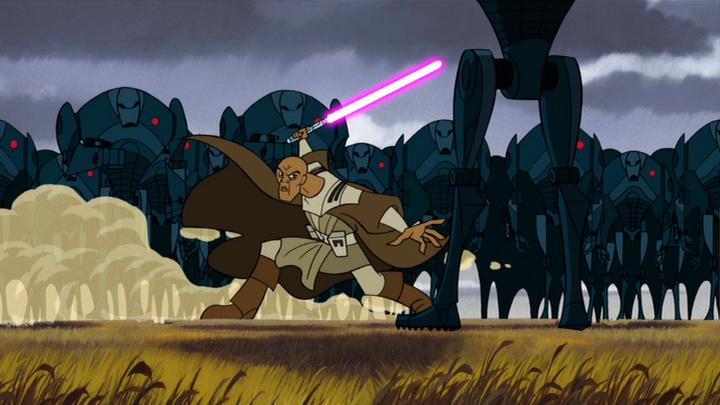 What is it ? : A small child runs from a farm, heading up a small hill where he gets a view of a massive battle taking place between the Republic and Separatists.
Many thousands of Battle Droids and Clone Troopers fire at each other, and at the centre of all this is Mace Windu. He rapidly slashes his way through dozens of battle droids with his lightsaber, until the light is blocked out as a massive Separatist vehicle slowly moves into place overhead.
From the centre of the massive vehicle a huge ram pistons down into the ground at such high speed that it causes the creation of a crater and a huge tidal wave of dirt. Clone Troopers and Battle Droids tumble down into the crater, although Mace Windu leaps high into the air, somersaulting out of the way.
But the vehicle strikes the ground again with it's ram, causing another tidal wave of dirt to cause Mace to lose his lightsaber, and we end the episode as dozens of Battle Droids surround the disarmed Jedi.

High Points : The action in this episode is fantastic, and I'm brought to mind the line in the latest episode of the new episodes of Clone Wars ("Unfinished Business") where Mace boasts about having "dismantled" 100,000 Battle Droids, and it makes me think of this episode as he's definitely increasing his total here.

I must also comment on the farm in the first few seconds of the episode, it looks so peaceful, calm and picturesque, that I'd love to see more. With windmills slowly turning overhead, it looks perfectly in place within the Star Wars universe, and it makes the transition to the raging battle only over the nearby hill all the more jarring. A great set up and scene.

Low Points : The shortness of the episode means there's not much wrong with this one, and my single complaint about this storyline is worse in the next episode, so I'll leave it until then.

So what do you really think ? : I really liked this episode, and it solves one of the main problems this series had during its first season. During the first season, we had a number of fights which were split over 2 episodes, we'd get a fight (Dooku vs Ventress, Durge vs Obi-Wan) which would then conclude with a clear victor. Then the next episode we'd get another fight to conclude their conflict, and these fights were always clearly marked as being separate fights.
But here we instead get a lovely cliffhanger at the end of the episode, with Mace surrounded and unarmed. This makes us want to watch the next episode, instead of having watched the conclusion of a story.
It remains to be seen whether this is a one off, or whether the writers learnt their lesson of the first season.

Final Words : Well, next episode we get one of the wildest and most fun rides of any animated Star Wars, in what I think was the most memorable episode of this season.