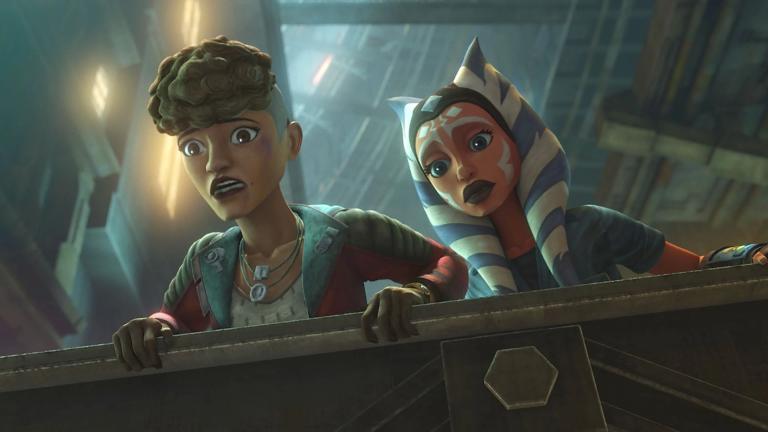 What is it ? : We pick up this episode with Ahsoka having just walked away from the Jedi Order at the end of "The Wrong Jedi" after being wrongly accused of being a traitor back at the end of Season 5.
She is on a speeder bike, and dives into one of the tunnels into the surface of Coruscant which lead to the undercity, but her bike fails, and spins upside down leaving her dangling from the controls, after dodging other traffic and hitting a Gozanti class transport knock off it's sensor dish, she seems to regain control of the vehicle when it's engine cuts out completely, dropping her down the tunnel. She manages to land with her now wrecked Speeder Bike on one of the platforms on the side of the tunnel, where she meets Trace Martez who offers help for a price, but when Ahsoka admits she has little money, Trace offers her the help never-the-less, showing her the ship she hopes to repair to get off world and away from the Jedi, their rules and their war. Ahsoka claims the war isn't their fault, but Trace tells her the Jedi have changed since she was young, and that they've forgotten about the people.
As they examine her bike, a thug and his enforcers enter the hangar, and tells Trace that her sister was due to pay back a loan today, and then he orders his men to assault Trace to get the money. She at first tells Ahsoka to keep out of it, but after a while she asks for help, and Ahsoka easily beats the enforcers and gets them to leave.
Ahsoka and Trace head to meet Trace's sister, Rafa, who is in the middle of setting up a deal to get droids for a customer, and ropes her sister in to help. Ahsoka and Trace work on the droids, finishing their work and beginning to put restraining bolts on the droids, when Ahsoka recognises the droids as not Binary Load lifters as they are selling them as, but demolition droids who were withdrawn from service due to them being prone to violence.
One of the droids awakens before the bolt can be attached, and breaks out of their workshop fleeing through the undercity.
Trace gets a speeder while Ahsoka gets the tracer for the droid, and they track it down, but it grabs Trace and begins scaling a wall before she can deactivate it. It tumbles down, striking the speeder and causing it to rock precariously on the edge of the tunnel heading down. Ahsoka attaches a winch to the speeder to stop it falling, but the motor burns out, meaning that Ahsoka is forced to use her Jedi powers to pull the vehicle back onto the ledge.
They meet with Rafa, who they advise to not sell the droids as they could be dangerous, but Rafa asks her sister to trust her to do the best thing, and later she reveals she sold the droids for double the price, allowing them to pay back the loan shark, as well as buy Trace new tools, which she and Ahsoka take to go and repair Ahsoka's bike.

High Points : Well, it's pretty darn great to be back with new Clone Wars, and this while not being a particularly strong story, is enjoyable enough.

And to damn it with faint praise, it's good, but there's nothing really outstanding about it.


Low Points : Now, I may seem to be over critical here, but nothing in here really makes the episode bad or unwatchable, but I do have a few points that are a bit negative.

For example, the hair. When I was watching through the old Droids cartoon, I knew one of the criticisms that loads of people had about it was the really weird and wacky, 80's style haircuts everyone had. And to a degree I notice the same here, with both Trace and Rafa having hair shaved at the sides and long in other places, particularly cool and trendy at the moment, but not really anything we've seen in that galaxy far far away. And while I thought they looked good enough, I worry that like Droids, when this is rewatched in 30 years time, it'll look spectacularly 2020's fashionable and therefore look totally out of date at that point.

Something I've criticised Clone Wars for before is its reuse of cgi models, and it felt far more egregious in this episode. In one cafe based scene towards the end of the episode, out of a fairly large group of characters, it really looked as if they'd cloned and copied a few of them, with it particularly noticeable about the Gotal in the crowd.
And why now are there Loth-cats everywhere. I spotted one early in the episode and thought it was just a drop in little joke, but one which felt out of place since it had already been done in "The Mandalorian". But then later in the episode a group of them run past. So I've got to ask, why are Loth-cat's now incredibly common? We never saw them before Rebels, but not they're the galaxies most popular pet.
It just feels lazy.

But perhaps the only problem the episode has which is with it's script instead of just a minor complaint. Ahsoka goes through this situation without learning anything, instead of coming to terms with the fact that it's easy to have high and mighty morals when your belly is full and the Jedi Order provides for your every need, but more difficult when you don't have money to live and are getting beaten up by loan sharks.
I'd have liked for Ahsoka to begin to learn that life's not as black and white as she's learnt in the seclusion of the Jedi Temple. That sometimes to live, people have to drop their standards and moral standards. But nope, she believes she's right at the start of the episode, and still believes that by the end of the episode.
Perhaps that's part of the journey she's to take during this arc of episodes, that the Jedi are flawed and life is more complex that she knows, but she doesn't seem to have started that journey yet.

So what do you really think ? : For all of the above, I enjoyed the episode. Watching Ahsoka again is a real joy and I'm definitely interested in seeing where the series goes next.

Final Words : So next week is Deal or No Deal, which is either the Star Wars branded version of the gameshow, or something where Trace will get involved with gambling debt, and need Ahsoka to help her out of her underworld entanglements.