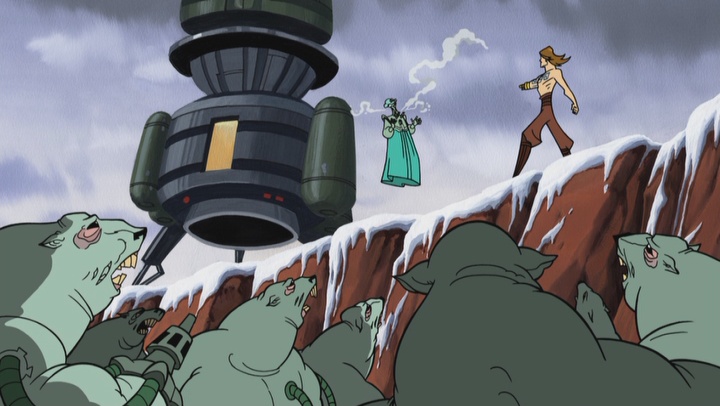 What is it ? : The Nelvaanian Mutants approach Anakin and attack, but he is aware they are under control of the Techno Union so he attempts to avoid hurting them, when one of the mutants rips his own chest piece off eliminating the control they have over him. He does the same for a couple of the other mutants and Anakin catches on, using his lightsaber to free the others from the control of their Techno Union masters.
The lead mutant points out a crystal to Anakin which is causing damage to the planet.
Meanwhile on Coruscant, Shaak-Ti, Palpatine, Roron Corobb and Foul Moudama reach a hover capsule in the tunnels beneath Coruscant, and Shaak-Ti sends the others on while she remains to delay their pursuers. Soon a group of Magnaguards attack her, and she defends herself with her lightsaber and one of the Magnaguards Electrostaffs she takes from one of them.
On Nelvaan, the Mutants are rampaging their way through the complex, tearing battle droids apart with their bear hands, and Anakin reaches into the crystal chamber with his cybernetic hand. The act of tearing it free causes the machine to short out and the crystal to explode, destroying Anakins hand.
As they reach the surface, the machine created Ice Age is ending, and Anakin force chokes some of the Scientists, as the Nelvaanian Mutants worship him as the Ghost Hand, copying him by tearing off their own cybernetically replaced gun hands.
And they return to their village, where the mutants are reunited with their families who are initially horrified, but soon recognise their loved ones.
Meanwhile, Roron Corobb and Foul Moudama get Palpatine into his secure bunker, but after the doors seal, they discover that Grievous got there first, and they fight him to a standstill, until his arms split and he begins wielding four lightsabers simultaneously.
Shaak-Ti continues to fight the Magnaguards, but is surprised when they break from combat and withdraw, and she realises what is happening and force sprints through the tunnels to the bunker where she discovers the bodies of her two comrades, and Palpatine in the hands of Grievous. She fights him, but he entangles her with cables that snake out of his arm.
Elsewhere on Coruscant, Mace Windu and Yoda are leading the fight against the battledroids, when they realise that the attack is overwhelming yet strangely uncoordinated, and therefore must just be a distraction to get Palpatine. Mace leaps aboard a passing LAAT/i and direct the pilot to take him to Palpatines bunker, where they see Grievous boarding a shuttle with Palpatine in his grasp.
Droids destroy the LAAT/i with a barrage of blaster fire, and Mace leaps down reaching out with the force and crushing Grievous's chest and his organs within causing the cyborg to cough in a familiar way, but the shuttle blasts off into the sky with Palpatine aboard.
He rushes into the bunker to discover the two dead Jedi, and Shaak-Ti restrained by the cables, broken by her failure to defend Palpatine.
Anakin finishes repairing his broken Cybernetic hand with the help of R2-D2, when he and Obi-Wan receive a message from Mace Windu that they are to return immediately to Coruscant to attempt to rescue Palpatine, and the episode ends showing the familiar battle between Republic vessels and Separatist ones around the city planet . . .

High Points : This episode feels a little predictable, as we're just putting everyone into place for the beginning of Revenge of the Sith, but there are a number of lovely set pieces. The Mutants rampaging through the Techno Union base is great, and Anakin's hand being destroyed wraps up his place as the Ghost Hand nicely. Since he truly has no hand, yet uses the force to reach out and kill the Techno Union scientists, fulfilling the prophecy more accurately than his Cybernetic hand did.

And it continues to use Grievous effectively as a thing of horror to the Jedi, revealing his ability to wield four lightsabers, and wrapping things up with him getting the wound that causes him to cough from Mace Windu at the climax of the episode.

Low Points : I feel that through no fault of its own, I must comment on a couple of problems with this episode and the timeline, Mace Windu using the force to crush Grievous's organs is official, however occurs in one of the comics sometime before the battle of Coruscant.
And we've now seen in different animated series, Obi-Wan and Anakin being summoned back to the Battle of Coruscant from two different locations.
But as I say, it's no flaw in this episode, as it was official at the time, but has been made legends since, so the stories within have been retold "officially", but I thought it worth mentioning.

I must also mention the running in this episode to be something I found hilarious. From Shaak-Ti's sped up running, to Palpatine's with his arms extended in front of him but his hands drooping down, so he looks like a Scooby Doo villain. The animators messed up on making any of the running in the episode look convincing.

So what do you really think ? : Not the epic ending you want for a series (and I get the feeling that season 7 of the new Clone Wars episodes won't end on an epic level either), but a nice wrapping up of the story and tying it up into Revenge of the Sith.
Nothing spectacular, and in many ways a bit of a disappointment after the highs of the past couple of episodes, but a nice workmanlike ending to the series.

Final Words : So, that was the Clone Wars 2003 series.
Is it a lost gem? No, not really, but there are a few absolutely excellent episodes in there, from Mace Windu single handedly taking out an awesome war machine and hordes of battle droids in the most overblown way ever. To the now made canon once again (by it's mention in the new Season 7 episodes of the new Clone Wars series) defence of Palpatine by Shaak-Ti and her comrades.
The series had a long lasting effect on the Star Wars universe, by its introduction of Asajj Ventress (and what an amazingly good introduction that was), made General Grievous actually a scary and dangerous opponent for the Jedi. And it definitely provided some entertainment along the way, proving itself well worth the time for a watch.