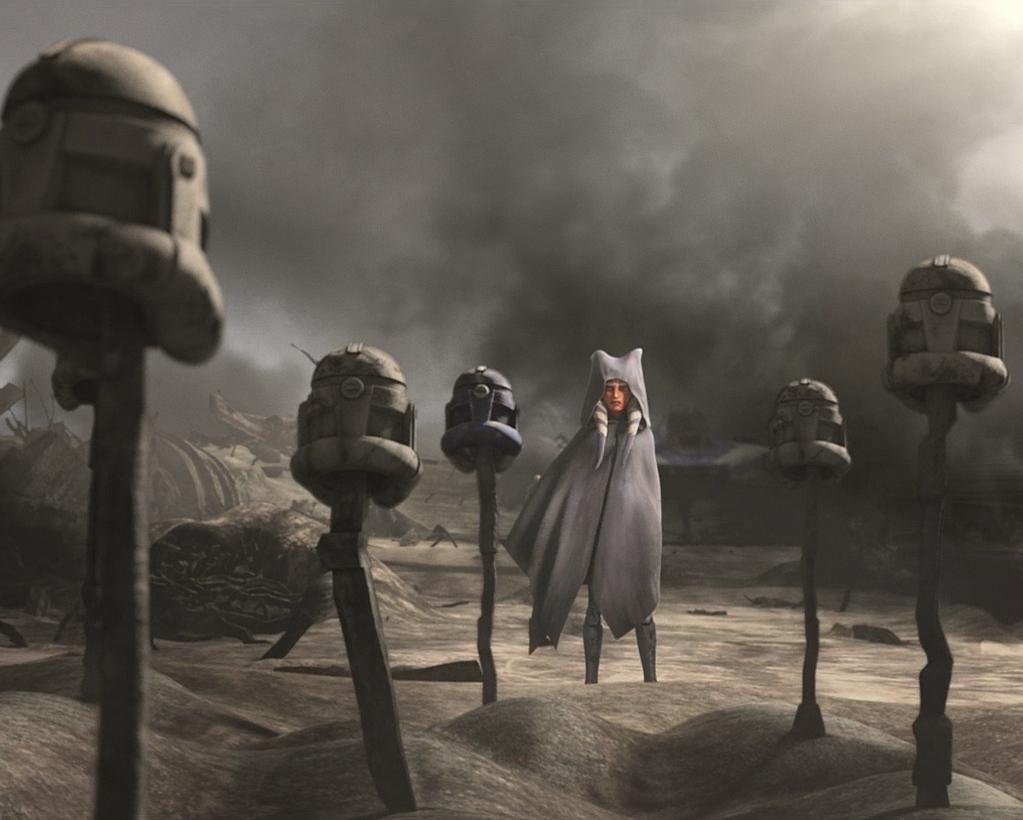 What is it ? : Ahsoka, Rex and some droids are trapped in the medical lab after removing Rex's chip and freeing him from Order 66. The Clone Troopers outside are cutting through the door, and as they break the seal, Ahsoka uses the force to fire the blast door down the corridor, knocking the Clone Troopers prone and allowing the heroes to escape.
Meanwhile, Maul makes his way through the ship to the Hyperdrives, which he wrenches out of place using the Force, causing massive damage across the vessel and for it too fall out of Hyperspace.
Heading down to the launch bays Rex and Ahsoka find they are sealed, and they get the Droids to unlock them, only for them to discover that Clone Troopers have been locked into the launch bays forming a trap, which Rex says in other circumstances he would be proud of his men for doing.
With the launch doors open, they can see the ship is plummeting towards a planet, and as Ahsoka says she doesn't want to hurt any of the Clone Troopers, Rex points out that the Troopers will loyally just delay her and Rex and die in the crash to take her with them.
Ahsoka comes up with a plan, and Rex escorts her out into the Hangar, saying that he's taken her prisoner, and Jesse points out that the order was to kill the Jedi. Rex argues that Ahsoka is no longer a Jedi, and therefore the order shouldn't take effect.
Meanwhile the Droids access systems nearby, requiring that Rex keeps the Clones talking. Jesse points out that Ahsoka was specifically covered by Order 66, and so are any Clones which refuse to take part, reducing Rex in rank and ordering his men to kill the two.
The Droids open hatches in the floor to the cargo bays beneath, and many of the Clone Troopers drop out of sight, leaving a more manageable number for Rex and Ahsoka to fight off. But Ahsoka sees Maul sneaking towards the shuttle they plan to take, and after a small skirmish where he throws her across the room, he takes the ship.
Ahsoka uses the Force to stop the ship from leaving, holding it in place, however she is forced to abandon concentrating on this task, to protect Rex from the number of his comrades attacking.
Maul leaves and jumps to hyperspace, and Rex and Ahsoka end up down in the cargo bays after the droids move the platforms with the Clone Troopers back up into the hangar. Jesse and the Clones work out what the Droids are doing and destroy the three, and Ahsoka and Rex head for a Y-Wing fighter in storage.
Rex boards it, but before Ahsoka can, the Star Destroyer begins being torn apart by the atmosphere, and she cannot board the fighter before it is swept away. Rex pilots the fighter through the burning ship, and the wreckage which is being torn from it, locating Ahsoka and she jumps between massive segments of engine, until she reaches the fighter and they fly free as the Destroyer crashes into the planet.
We then see the Y-Wing landed next to the wreckage, and Rex attempting to repair R7, and as the camera pans away we see Ahsoka standing before a large number of grave markers each topped by a Clone Trooper Helmet, including Jesses. Pondering all her dead friends, she drops her lightsaber to the ground.
We cut to an Imperial Lambda class shuttle landing at the same place, Imperial Probe Droids and Stormtroopers are securing and scouting the area, but we see Darth Vader standing before the grave markers now almost totally obscured by snow, and he picks up Ahsoka's lightsaber, igniting it's blue blade, before turning and walking away. Something we see reflected in the aged, cracked and snow covered visor of a Clone Trooper helmet painted in Ahsoka's colours, and high overhead, a Convor, flies watching the proceedings.

High Points : Not what I expected, not what I expected at all.
But that's not to criticise the episode, it's really epic, and there's a lot of really interesting fighting as well as a bunch of continuity mending elements. We discover whether claiming to no longer be a Jedi works against Order 66 (it doesn't), and why when Rex was promoted to Commander, he refers to himself as a Captain in Rebels (he gets demoted due to disobeying Order 66).

Maul escapes, although is fairly insignificant compared to the other events ongoing, and we see Rex and Ahsoka survive the events of Order 66.

And the fight to escape the Star Destroyer as it is torn apart plummeting towards the surface is incredible, Ahsoka is at the top of her powers here, parrying attacks from Dozens of Clone Troopers, and leaping between pieces of wreckage as the ship breaks apart, stunning.

Finally, I did like the touch of the Convor watching Vader collect Ahsoka's lightsaber. I'll presume it's the same one that is connected with the Mortis Sister, and helped Ezra through the Place between places, and has been involved with so many of the important events of Ahsoka's life.

Low Points : But, although we see how the pair survive the events of Order 66, on the day of the order, we don't really see how they survive the events that it triggers.
I'd always thought that the series would end on a somewhat hopeful note with Rex going off to free other Clone Troopers, and Ahsoka going into hiding (maybe with the sisters from the mid section of this season, but I'd always really hoped with Asajj Ventress who'd helped her during the time she was accused of terrorism and hunter by the Jedi (yes I know that Asajj is dead by this point in the timeline, but Clone Wars has already blown continuity to pieces)). The idea of leaving us with untold stories of Ahsoka and Asajj in hiding from the Empire, both apprentices betrayed by their masters, but one Sith and one Jedi is one I find really compelling.

But I can understand the dark tone the series leaves us on, but on reading about the alternate version in the Ahsoka novel, I can't help but feel that it was handled slightly better, with Ahsoka and Rex faking their deaths, rather than Anakin / Vader being aware they survived, which kind of contradicts Rebels.

So what do you really think ? : A solid ending to the series, but one that I feel a little lacking in comparison to the two episodes which went before. It feels a little conventional, and doesn't tie up the series as neatly as I thought they would. While we get how they survived the day of Order 66, we get no information on what happens afterwards, although perhaps that is outside the scope of the series, as the Clone Wars have now ended.

Final Words : So, they brought Clone Wars back, giving us four episodes we'd seen before, four episodes which were good, but not anything special, and an amazing final four episodes.
They ended on such a downbeat note, the heroes lost, they killed their friends and comrades, the Emperor rules triumphant.
But the series still feels unfinished, as it didn't even make an attempt to tie up certain threads. We never got a resolution to Asajj Ventress's story, we never got anything more with Hondo Ohnaka (which is a total sin), and we don't discover how Gregor and Wolffe survive the clone wars and remove their chips.
While I really enjoyed this episode, it really didn't tick all the boxes it needed to, so while everything it does, it does amazingly, I'm left somewhat disappointed at the end. . . .