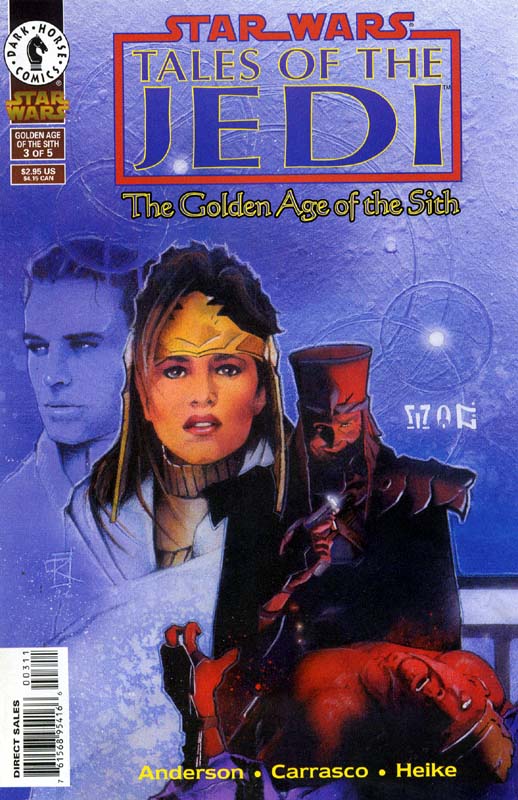 The Golden Age of the Sith 3: The Fabric of an Empire

What is it ? : On the Sith Throneworld of Ziost, Gav and Jori Daragon wait in a prison cell their ship seized, and their lives awaiting judgement from the Sith. Above them the Sith Lords are meeting, and making judgement on whether they are to live or die, with Ludo Kressh arguing they represent the beginning of a Republic invasion, so should be killed. But Naga Sadow arguing that they represent an opportunity to conquer and plunder hundreds of new worlds.
Eventually the council agrees with Kressh, and the Sith Lord Simus, a severed head surviving through the Dark Side informs the Daragon's that they are to be put to death, and the council is to decide what now happens to their ship.
Sadow however returns to his hidden crater citadel on the moon Khar Shian and prepares his forces for a sneak attack on Ziost. He returns to Ziost, and raids the Daragons ship, retrieving weapons, before moving on to free the Daragons, but he is spotted by Simus, who Sadow kills with the weapons he seized from the Starbreaker 12.
Planting the weapons to frame the Republic, he takes Jori and Gav to his Citadel and rushes back to Ziost, as if he has just heard of the attack. He rages at the council about the attack, and the death of his mentor Simus, and demands to be made the next Dark Lord of the Sith, and the council agrees pledging their forces to his, all except Ludo Kressh who takes his forces and refuses to be involved in this folly.
Naga Sadow declares that they don't need Kressh and tells the gathered Sith Lords that they will strike the Republic first. . .

High Points : We're now getting some great story telling, and the plot with Sadow faking the Republic attack to engineer his ascendancy to the position of Dark Lord is great. I also really liked the moment where he is confronted by Simus, as I got the feeling that although he's willing to kill and manipulate anyone, he genuinely regretted that it was his mentor who had discovered them and that he would need to kill him to complete his plan.

And a really odd moment I enjoyed, was while Jori and Gav are in their prison cell, they watch a small rodent scurrying along a wall, when a larger insectoid creature with claws emerges from a crack in the wall to prey upon it. However the rodent reveals it has large fangs and bites into the insect. A moment of distraction from the events occuring, and one which communicated to me that not everything going on is vital to the plot as the galaxy keeps on going, that the cell is obviously filthy and vermin ridden, and that this was perhaps the most interesting thing that the Daragons had seen that day, communicating the passage of time as they are kept there for a long period while the Sith Lords argue high above.
It also perhaps reveals the fact that here in the Sith Empire, the predators are prey sometimes.

Low Points : Gav and Jori are given little to do beyond sit dejectedly in their cell and await the decision of the Sith Lords. While this communicates exactly how powerless they are in this situation, having fled their problems back on Cinnagar only to become mere pawns in a much larger conflict. But for protagonists in a story, they are almost completely passive in this issue, being given no chance to argue their position or even to escape their fate.

So what do you really think ? : A solid issue and the story in underway, as we move forwards with the Sith now mobilising to attack the Republic. Where I felt the last issues were all set-up, we get some exposition here, for example the explanation of Simus and Sadow's relationship, but it's fairly minor as the story takes from stage in an extremely enjoyable way.

Final Words : Having read this some 20+ years ago, I know how the story develops, but I do find it kind of odd that this entire series will merely bring the Sith and the Republic to the edge of war and not tell the entire story. The story will of course be completed in "The Fall of the Sith Empire".