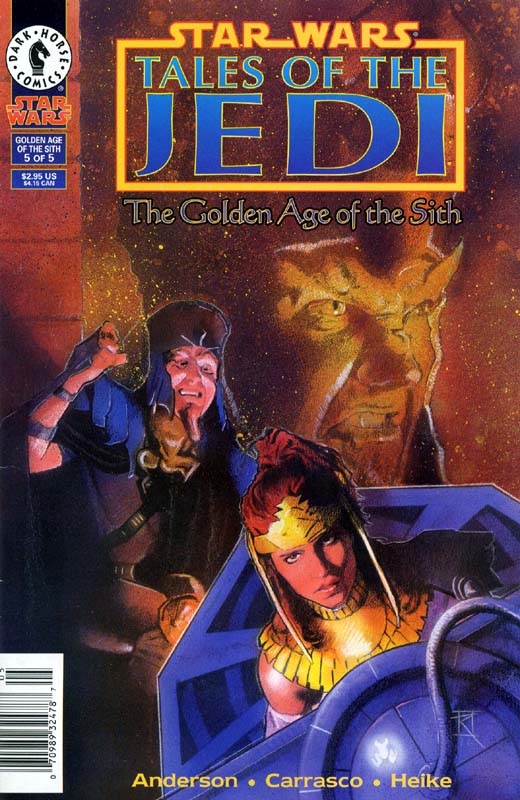 The Golden Age of the Sith 5: The Flight of Starbreaker 12

What is it ? : Ludo Kressh and his allies forces are attacking Naga Sadow's fortress on Khar Delba and Naga Sadow acts as if he is surprised and has been betrayed, helping Jori Daragon to her ship and telling her to escape this attack.
The Fortress is crumbling under the attack and looks unable to survive, but Jori doesn't want to leave her brother behind, but Sadow uses the Jedi Mind Trick on her and convinces her to flee aboard the Starbreaker 12.
Her ship agilely dodges the Sith attacks even when they spot the Republic vessel and target it, and she makes the jump to Hyperspace retracing their voyage here. Upon her departure, Sadow orders his fleet into action, and they arrive from their hiding place at his true fortress on the moon Khar Shian.
Simultaneously he orders his agents among Kressh's allies crews into action, and the various Sith Lords fall beneath the knives of their slave crews.
Kressh realises the severity of his failure and orders the remains of his fleet to retreat as Sadow's fleet tears into the now mainly undefended fleet of Kressh and his allies.
Gav Daragon senses that his sister has fled and is glad she is safe now, and Sadow begins ordering his fleet to prepare for an invasion of the Republic, using the tracking beacon he has had installed on the Starbreaker 12 which Jori is taking straight back to Cinnagar. . . .

High Points : Sadow's plans are absolutely superlative, and he really comes across as a tactical genius. His Fortress he is sacrificing really has nothing of value in it, and he appears to Jori to be acting in a totally benign fashion by helping her to escape as his empire crumbles under attack by traitors. This encourages her to flee back to the Republic to warn them of the Sith, leading his forces straight back.
Although why his people couldn't just get the Hyperspace coordinates straight from the Daragon's navi computer I don't really know.
Then when his plans are in place, he snaps the trap shut on Kressh, and reveals that he was never in any particular danger, as not only did he have a superior fleet in places to trap Kressh between them and the Fortress on the surface, but he also had a slave uprising in place among the crews of Kressh's fleet.

Low Points : A great issue with very minor faults, firstly that Gav as one of the main protagonists of the story is incredibly passive in this issue, with Naga Sadow driving the story forwards almost entirely. In fact given that Sadow is supposed to be the bad guy in this story, I'm finding myself rooting for him more than any of the other characters as he's the one we're finding the most about and seeing his inner thoughts so we can understand and empathise with him.
Okay, so he wants to invade the Republic, which might make it seem like he's the bad guy, but at the moment his enemy looks likely to be the Empress Teta who has crushed the rebels in her system to take control of it. Teta and Sadow so far have both just unified their empires by crushing their opponents, yet one is a Sith who we're supposed to believe is a bad guy, and one is a pretty human female, so she's obviously supposed to be the just and fair one.

And although I pay credit to Sadow's plan to have the slaves aboard Kressh's fleet rise up against their Sith Masters, I would have liked to see something more of how this was done. Offering them the chance to become part of his attack on the Republic and rule over his territories there when he is victorious rather than just living as Slaves under their current masters seems like an easy offer to make and one which would motivate them. But instead, the Slave Uprising comes out of nowhere, with set up or clues it was going to happen at all (looking back through the issues the only hint I could find at all, was Sadow's line when speaking about the Massassi Warriors "I've earned their Loyalty", but that really doesn't hint how).

So what do you really think ? : An excellent issue, and one that wraps up this story arc extremely well, paving the way for "The Fall of the Sith Empire", and making me extremely keen on getting around to reading it.

Final Words : Rereading Golden Age of the Sith after all these years has made me reappraise Naga Sadow as a Sith Lord. I'd always considered his to be a bit of a lackluster character, not being anywhere as cool as Vader or even Exar Kun in the other Tales of the Jedi comics. But perhaps it's because I'm now many years older, I can see what a masterful manipulator, planner and tactician he has been shown to be (although perhaps Fall of the Sith Empire will bring his characterisation down again).
In my mind, now, hes up there with Palpatine as a Sith Leader, manipulating his foes into revealing themselves and throwing their forces away into traps of his creation, all the while helping his plans move forwards. In one plan, he's motivated Jori Daragon to reveal the hyperspace route back to the Republic by getting Kressh to fall into a trap where all of Sadow's enemies will reveal themselves and be wiped out. While also making Kressh look like a traitor to the rest of the Sith who fall into line behind Sadow's forces.
It's absolutely masterful and a joy to read.