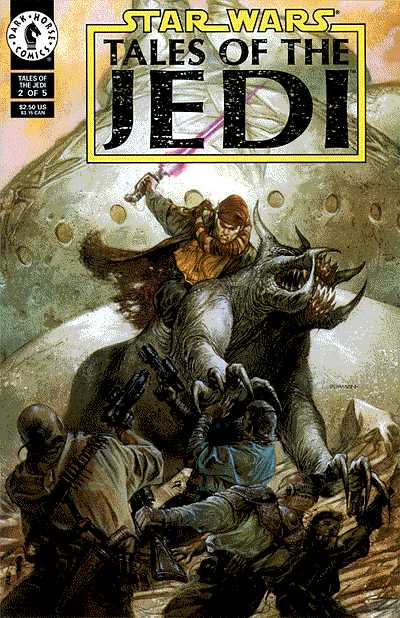 Ulic Qel-Droma and the Beast Wars of Onderon, Part 2

What is it ? : The Nebulon Ranger has been hit by a missile with Ulic-Quel Droma, his brother Cay Quel-Droma and the Twi'lek Jedi Tott Doneeta aboard it. They use the shields to land the ship softly near to a magnificent building constructed in the jungle, and Tott Doneeta uses the force to befriend the Boma Beasts guarding the building.
The Jedi ride the beasts into the building after discovering that the missing Princess Galia is in the middle of being married to the owner of the citadel, Beast Lord Modon Kira's son, Oron. But as they are trying to rescue her, they discover that she is willingly marrying Oron as they fell in love.
Speaking with the Beast Riders during the celebration of Oron and Galia's wedding the Jedi discover that Modon's father was banished from Iziz for fighting the Dark Side, and how a Dark Jedi, Freedon Nadd came to Onderon starting a long line of darkness in the Iziz royalty.
Ulic asks for a chance to bring peace to the planet through diplomacy, but the beast riders only do so on the condition that the Jedi will help them if diplomacy fails.
Cay repairs the Nebulon Ranger and they fly back to the city, but Queen Amanoa s furious that her daughter has betrayed her by marrying a Beast Rider and threatens to kill her, summoning the power of Freedon Nadd and surrounding the Jedi with Darkness.
The Beast Rider forces from around the planet attack, armed by smugglers since the first contact with the Republic, both sides are well matched. As Cay tries to force Queen Amanoa to quench the darkness, he is shot in the hand dropping his lightsaber, before his entire arm is severed by one of the Royal guards.
Ulic carries his brother from the throne room into a corridor where Cay spots a broken droid, and begins salvaging it as this particular model makes good prosthetic parts.
Overhead a starship arrives, and Master Arca Jeth uses Battle Meditation to turn the tide of the battle, leaving the Beast Riders triumphant. Master Arca scolds Cay and Ulic over failing their mission despite Ulic's protestations that there was no other way, and they head to Freedon Nadd's mausoleum to confront Queen Amanoa.
The darkness surrounding the Queen crumbles at the approach of the light emitting from Master Arca and she dies, leaving Galia angry at the Jedi for the death of her mother. Master Arca tells her that he never killed the Queen, but the Dark Side deserted her killing her, and that even though the Princess is from a line of darkness she can change things and be free.
Arca tells of the history of Freedon Nadd, a Jedi seduced by the Dark Side, but who couldn't become the Dark Lord of the Sith, so came to Onderon to become a King instead. Although Galia's and Oron's wedding unifies the people of Onderon, Arca warns that Freedon Nadd still has followers within the city, and rumours exist of Galia's father Ommin as well.
Ulic questions about a Jedi falling to the Dark Side, which Arca tells him is rare, but wishes it will never happen to Ulic. . .

High Points : While there's a load of action in this issue, and it really continues building the story, it nicely conceals that it is building the world for later. Not only are we getting fed (perhaps a little obviously, see below) the story of a Jedi falling to the Dark Side, but we're also having the groundwork set for a much bigger conflict against the Dark Side build up. The Beast Wars may be ending, but this is only the first signs of a much larger war coming.

The characterisation is really good, and while I may not be happy with the way Arca instructs his students (see below), but it does set up why Ulic is so headstrong, because Arca demands he always be perfect. Also Cay's replacement arm really builds into his character as the technology tinkerer, and instead of it just being a replacement, this cybernetic arm is going to be a work in progress for him as he modifies and tweaks the arm to make it better than his flesh and blood one.

The building of mistrust of the Onderonians led by Queen Amanoa last issue proves to have been a brilliant piece of world building, as she was manipulating the Jedi, wanting to lure Arca here for her master Freedon Nadd. I would perhaps have liked a little more manipulation, as the Beast Riders are made out to be just a little too nice given their descriptions as "Ruthless" and "Barbaric". Instead just appearing to be the nice guys who were chased out for challenging the Dark Side and therefore obvious heroes. Perhaps a suggestion that the civilised people of Iziz had turned to the Dark Side from fear of the "Barbaric" and "Ruthless" beast riders.

Low Points : The ending is a bit too foreboding for my liking, as it obviously sets up Ulic to fall to the Dark Side too obviously. Arca doesn't wish that Ulic never sees a Jedi fall to the Dark Side, but directly wishes that Ulic doesn't fall. So either he predicts the darkness in Ulic, or doesn't give a damn about Tott or Cay?

Speaking of Arca, he's a bit of a Jerk to Ulic and Cay when he arrives on Onderon, instead of guiding and mentoring them, he instantly chides them for their failings. That Cay has lost an arm and replaced it with a Droid one, and that Ulic who was sent to bring peace instead is now involved in a war. He directly tells Ulic off for not sensing the Dark Side here when he first arrived.
So what was Ulic supposed to do, just march in and execute the Queen on the spot? The involvement of the Dark Side and a fallen Jedi is so rare that Ulic can barely believe that it's possible, yet Arca expects him to just deal with it without warning. This is no failing of Ulic, but a failing of Arca's teaching skills.

We were led to believe that the wilderness of Onderon was extremely hostile, hence the necessity of the walled city of Iziz, yet now we discover there are masses of Beast Riders spread across Onderon, who have managed to tame the creatures and build magnificent fortresses, so it seems that surviving when banished is the norm not a rarity. And given that the Onderonians seem to be a starfaring civilisation, how come no one has noticed all these Fortresses before?

And wow, Cay takes having his arm cut off in his stride! He needs carried from the battle by his brother, but almost instantly starts scavenging for spare parts to replace his arm, and is ready for combat seemingly minutes later.

So what do you really think ? : Although this is the end of "Ulic Quel-Droma and the Beast Wars of Onderon", it's still really only the introduction to the larger story, with Nomi Sunrider still to be introduced into the story and further events on Onderon which will affect the entire galaxy.
So while the story is racing along, we're still getting only hints of what is to come, with major players in the story still to be introduced, however is has definitely started in the right place, as Ulic Quel-Droma will remain with us for the rest of our time in the Tales of the Jedi era.

Final Words : I can see why these stories stuck with me for so long, the Tales of the Jedi era is fantastic, and really feels like Star Wars. I can see why Bioware set their games in this era, far away from the movies, with a freedom to sculpt the galaxy and shake up events, all while remaining true to the feel of the movies.
My memories are of particularly liking Nomi Sunrider, so I'm looking forwards to these next few issues "The Saga of Nomi Sunrider".