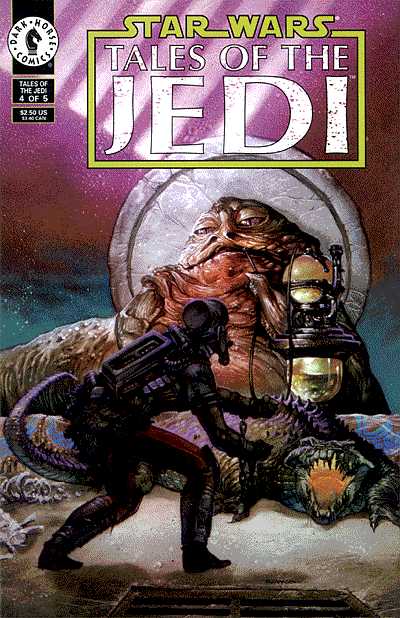 The Saga of Nomi Sunrider, Part 2

What is it ? : On Ambria, Nomi Sunrider has been training with Jedi Master Thon, and is sitting with her daughter Vima. Vima is playing with a group of lizard-like neeks which lead her down to a lake where a large hssiss attacks, and Nomi concentrates, making the beast fight a duplicate of itself, unknowingly using Jedi Battle Meditation against the creature. The Dark Side emanations from the lake cause her to doubt the reasons she is here in the wilderness of a planet she doesn't know, studingly with the beast like Master Thon when the Jedi way failed her husband allowing him to die.
Thon however has left her mainly alone to deal with her loss and pain, but can foresee she will become a great Jedi.
Meanwhile, the pirate Finhead Stonebone and his gang are attacking a freighter which is constructed from the exoskeleton of a giant space wasp, the freighter is protected by a fighter on contract from Bogga the Hutt, but the pirates easily defeat it.
However once they plunder the freighter, they find themselves trapped in the tractor beams of Bogga's enormous dreadnaught, Enforcer One and are captured by the Hutts men.
Back on Ambria, Oss Willum is helping repair Nomi's droid, A-3D0, who was damaged during the Hutts earlier attack. He tells her of Master Thon, and tells her he must soon depart with the Jedi Knight, Tott Doneeta, to aid Arca Jeth on Onderon.
Back with Bogga the Hutt, he is dealing with his minion, Gubd, who failed to retrieve the Adegan Crystals from Master Thon. He offers Finhead Stonebone a chance to survive and even join the Hutts organisation if he retrieves the crystals from the Jedi Master.
Now alone with Master Thon, she discovers that she can understand him through the Force, and he instructs her she will construct her own lightsaber using the Adegan Crystals she brought to him. However, due to the death of her husband, she worries that using a lightsaber on the thugs that killed him was an act of revenge and of the Dark Side, so refuses to use one ever again. Thon seemingly relents, and offers to take Nomi and Vima on a tour of his world, and Nomi instructs A-3D0 to take their ship if she doesn't return and tell Andur's old Jedi Master, Chamma, what has occurred.
Finhead Stonebone refuses to go against a Jedi Master, seeing it as suicide, however, Bogga feeds his first mate to his pet Hssiss, causing the Pirate to reconsider his decision at the bloody and brutal death, and is ordered to return with the Adegan Crystals and Thon's body. . .


High Points : And issue where seemingly not a lot happens, with much of the issue based around Nomi's doubts and fears and putting the pieces into play. However this is exactly what I enjoy so much about this story, Nomi isn't a brave Jedi charging into battle. She is a mother, who has fears for her daughter, and fears caused by watching the death of her husband, a seemingly powerful Jedi Knight.
An the story allows us to explore that with her, and the power the Dark Side expresses magnifying her doubts and fears. Thon isn't a naturally calming presence, a large beast who is trying to give her space to deal with her loss, but instead is allowing her to dwell on the situation which has gone out of her control.
Even Oss Willum expresses that while Thon is the best Jedi Master he has met, but warns that he can be scary and testing, having chosen the hostile Dark Side environment of Ambria to test himself by driving back the Dark Side.

Low Points : The dislike that Bogga the Hutt displays for Master Thon makes it appear that he has had run ins with the Jedi Master before, but that only raises the question of why he would thoughtlessly kill one of Thon's creatures and threaten Oss Willum's life, when trying to retrieve the Adegan Crystals, which only served to provoke the Jedi Master.
And are the Crystals really that valuable? I've expressed this before during the Clone Wars series, that lightsabers are apparently valuable. Which surely just makes every Jedi a target as they are walking around with a fortune on their belt.

I also find it a little odd that the same creatures as are in the lake on Ambria, are the same ones that Bogga has as pets.

It also momentarily confused me that Oss Willum refers to Ambria as Arkania in one frame, and I wondered why they were on the homeworld of Master Arca Jeth.

So what do you really think ? : I do really enjoy this series, and admire the way that unlike so many other Star Wars stories, the Saga of Nomi Sunrider is slowing down and taking time to actually allow the characters to have emotions and thoughts beyond just heroically charging off to fight the Dark Side.

Final Words : The problem with reading these comics again, is that although I don't clearly remember the story, the events remind me enough to be able to predict what happens next. And I find myself wondering if I'd managed to work out Master Thon's plans at this point in the story, or whether it was going to be a surprise. But they don't come to fruition until next issue, so I should probably wait until then.