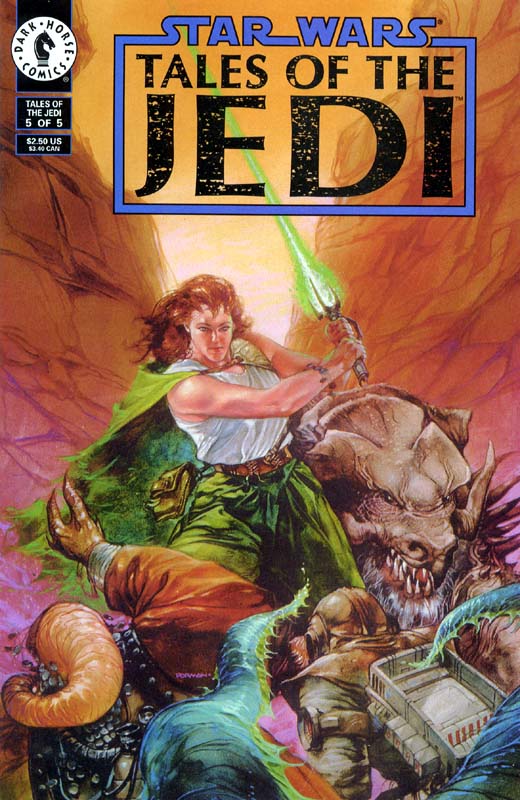 The Saga of Nomi Sunrider, Part 3

What is it ? : Finhead Stonebone the pirate captured by Bogga the Hutt last issue, he has seen his first mate killed by Bogga's pet Hssiss, and has sworn himself to the Hutt. Bogga tells him he'll be allowed to return to his pirating, returning only annually with fealty to Bogga, but first he must travel to Ambria and bring back the Adegan crystals that Master Thon has.
Meanwhile on Ambria, Master Thon is taking Nomi and her daughter Vima on a tour of the planet, offering to help Nomi construct her lightsaber. But Nomi still connects the weapon with the death of her husband, and lashing out in fear and anger against those that killed him, so refuses.
Thon takes her to the Dark Side lake where Nomi defeated the Hssiss instinctively using Battle Meditation, and explains how he used his powers to push all of the Dark Side on Ambria into this lake, that the Dark Side challenges and stretches a Jedi, much as it did with Nomi.
He takes her onto a gigantic rift on the surface of Ambria, explaining to her that the Force is deeper than the rift, and he likes coming here to contemplate upon it. He uses a Jedi Holocron he was given by Arca Jeth, and the keeper of knowledge within the Holocron, Ood Bnar, tells Nomi of the time when the Jedi would fight the Dark Side, and sometimes fallen Jedi themselves, and tells her that one day she will be a powerful and influential Jedi.
Thon tells Nomi that a Lightsaber isn't just a weapon, it's a way of a Jedi centering themselves, and focusing on the Force, and gives her his own Lightsaber, telling her that it's only right that his most powerful student should have his Lightsaber.
As Nomi considers this, Finhead Stonebone and his men arrive and attack Thon's hut, searching for Thon and the Crystals, and Thon tells Nomi it's time to use the Lightsaber, but she refuses.
So Thon surrenders to the Pirates, saying if his Apprentice refuses to fight, then so does he. The pirates locate the Crystals, and start preparing to leave with their prisoner and prize. But seeing her Master in chains, causes Nomi to ignite her Lightsaber and charge into combat, cutting the chains off Thon. The two Jedi fight the pirates and force them to flee, afterwards Thon tells her that while no one wants enemies, they do test you and force you to reach beyond yourself and find courage.
Thon tells Nomi that he deliberately left her to make her own decision, and she has chosen to follow the path of the Jedi as prophesied by the Holocron. . .

High Points : The way Thon forces Nomi to take up the Lightsaber to rescue him is pretty darn great, due to the death of her husband she looks upon the weapon with negative connotations. But Thon forces her to see the good she can do as a Jedi, that the weapon can be used to help others and defend the weak. She realises that sometimes only she will be able to help, so she must have the courage to do good when it is needed, even if she is frightened of the evil she could possibly do.
It's a fantastic lesson he teaches her, but a little risky as I'll touch on below.

And once again, the story is given space to breath, instead of just rushing us through Nomi taking up the lightsaber and beginning her lessons like we see so often (I'm looking at you The Last Jedi), we are given time for the character to grow and learn.

Low Points : While I adore the story, it does seem somewhat overly risky and heavy handed, as it's entirely a possibility that Nomi could have seen that Thon was more than capable of taking care of himself and just leaving him to get on with it. Although I suppose that would have shown him that she wasn't worthy of being a Jedi anyway.

It seemed that the story was going to allow Nomi to learn to be a Jedi without needing to take up the lightsaber, as Thon mentions that there are other ways to use the force, and they specifically bring up Nomi's Battle Meditation. But alas no, we don't get to see Nomi become a type of pacifist Jedi, which I personally think would have been pretty great, instead she just gets over her fear, and starts a swinging, just like every other Jedi (except funnily enough Thon himself who doesn't use a saber).

So what do you really think ? : This definitely remains one of my favourite Star Wars stories, I think it's because we've been allowed three issues to follow Nomi's journey into starting to train as a Jedi. We're seeing her personal journey from a mother to a warrior, and instead of just becoming a protector, which would be the obvious choice to make the character. She's learning to do it to help others, for the greater good, rather than just in a maternal protective manner.

Final Words : So once again while this is the last part of this "series", it moves on into "The Freedon Nadd Uprising" fairly smoothly, bringing Nomi and Ulic together as the stories entwine to become one story. But more on that in the next review.