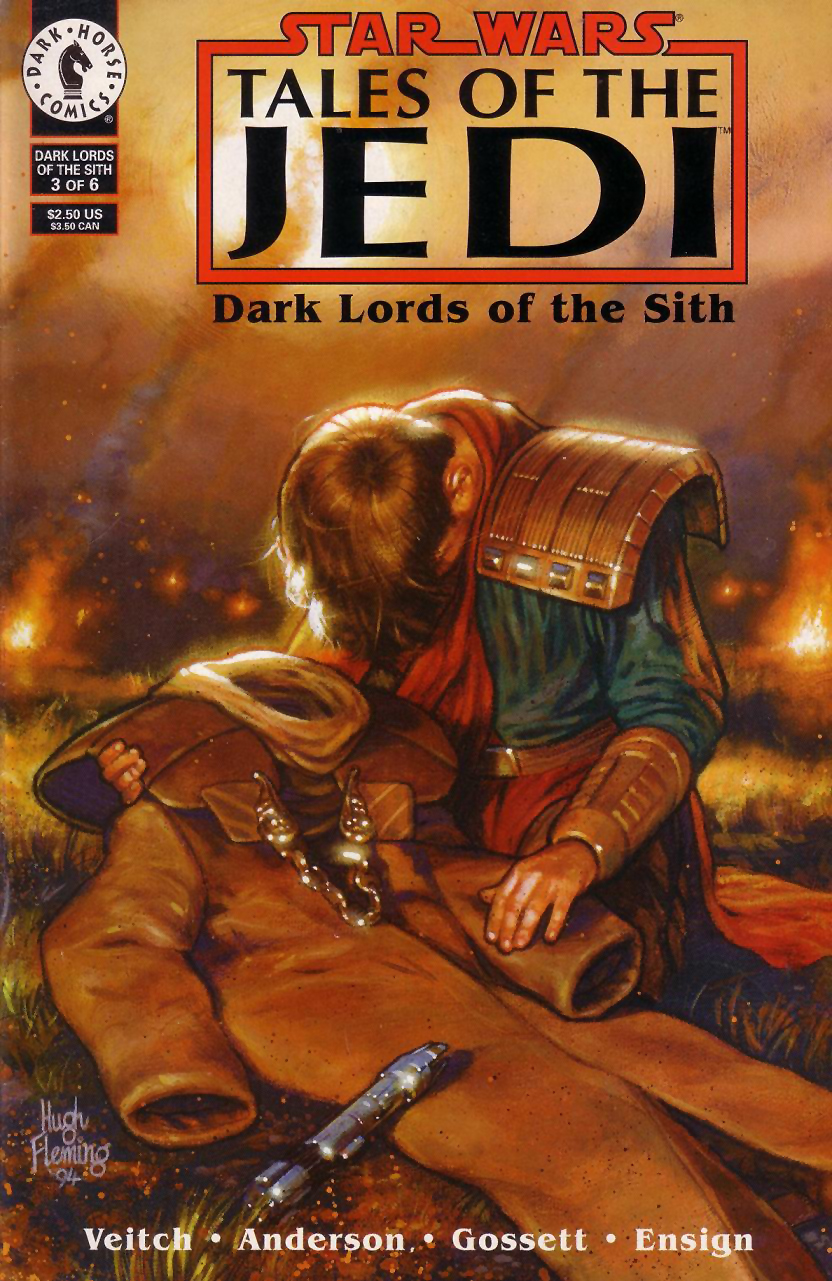 Dark Lords of the Sith 3: Descent to the Dark Side

What is it ? : After the Republic defeat in the Empress Teta system, the Krath have declared war on the Jedi themselves, so the Jedi have called for a mass gathering on the world of Deneba to make a decision of what is to be done.
Jedi Master Odan Orr telepathically connects to all of the Jedi to allow them all to have a say in the debate. Nomi Sunrider with her daughter Vima notices that Ulic Quel-Droma's wound taken in the battle above Koros still hasn't healed, and he tells her that it was because it was taken while under the effects of the Dark Side.
Master Arca discusses that Vodo is running late again, but this time perhaps because of his lost apprentice Exar Kun, and he shares his encounter with Kun on Onderon where the young Jedi was seeking access to forbidden knowledge.
Meqnwhile on Korriban, Exar Kun has arrived at the valley of the Dark Lords, where he is attacked by guardian spirits animating the bodies of fallen plunderers of the Sith artefacts stored here. He escapes into the Great Temple at the advice of Freedon Nadd, but when he wants to withdraw back to his ship to consider his next actions, Nadd causes the entrance to collapse, meaning that Kun must move forwards further into the Temple.
On Deneba, because he is the Jedi Watchman of the Empress Teta system, Ulic puts forward his plan, that rather than throwing military forces at the Krath and losing thousands of lives including many Jedi, he intends to infiltrate the Krath and take them down from within. While other Jedi argue against this plan, Cay Quel-Droma notices that the droids serving the gathering are behaving oddly.
Back on Korriban, Exar Kun explores further, but Nadd once again causes a collapse releasing Dark Side spirits which engulf Kun, as the rocks smash down shattering his bones. Kun reaches out to Master Vodo to help him focus on the Force and heal himself, but Nadd blocks any help that Vodo can provide, so Kun hesitantly accepts the Dark Side and is reborn and healed. The scream of the pain involved is sensed by Jedi across the Galaxy.
At the same time, a Krath warship releases Life Pods which deliver War Droids to the surface of Deneba, as the serving droids reveal they have been altered and they attack the gathered and surprised Jedi. The newly arrived Sylvar rescues Vima Sunrider from one of the War Droids, and introduces herself to Nomi, as Arca Jeth is cut down in combat, dying in Ulics arms as the battle rages around them.
On Korriban, Freedon Nadd tells Exar Kun of the Sith Lord Naga Sadow, and his exile on Yavin 4, directing the Young Jedi to go there to learn of the powers that Sadow had discovered, including perhaps the power to make Sith Spirits corporeal again. But as a last test, he yanks Kun's lightsaber away and leaves him at the mercy of several Tuk'ata beasts. Kun is pinned by one, and although he does try to use the Lightside to defend himself, he finally gives in to anger, pulling his Lightsaber back and killing the beasts.
Back on Deneba, the droids are defeated, and Ulic is outraged by the death of his Master, so vows to carry out his plan and destroy the Dark Side from within despite the advice of Nomi . . .

High Points : The two interwoven storylines in this issue are fantastic, both the temptation and corruption of Exar Kun and the Jedi gathering on Deneba and their ambush by the Krath.
Exar's pride always made him skirt the Dark Side, but here Freedon Nadd causes him to tip completely over into embracing it. Meanwhile Ulic is undergoing a very similar path, where Exar believes he can learn the power of the Dark Side and use it, Ulic believes he can use the power of the Dark Side against itself. And while Ulic appears to be the more heroic of the two, their stories are becoming very similar as their pride in their Intelligence on Exar's part, and in his bravery on Ulic's part are both going to be their undoing.

Low Points : I do find it somewhat odd, that Exar Kun after rejecting his masters advice and teaching since he was introduced, when he is in danger reaches out to his master for help. Which seemed oddly out of character for the brash and confident Kun, to go whimpering back to his master for aid. I'm also surprised that his anger, which somewhat leads him to the Dark Side, doesn't play more of a part, anger at Freedon Nadd lying to him, and leading him into danger and tricking him. Instead he accepts it all somewhat passively.

Ulic's plan to join the Krath, infiltrating them and learning their powers to use against them also doesn't seem to attract as much criticism as I would have thought. A Jedi planning to learn the Dark Side, I would have thought that all of the Jedi Masters would have instantly reacted against. But instead, while he is advised it is a bad plan, he is allowed to go forward with it seemingly just for story reasons.

So what do you really think ? : A brilliant issue, action packed, with a large amount of story progression in it as both Ulic and Exar move closer to their destinies.

One final very minor complaint which I'll put here rather than the Low Points section. When Arca Jeth passes away, he fades into the Force, just as Yoda and Obi-Wan had. However we now know that this is something they learned to do from Qui-Gon Jinn, and no Jedi before had been able to do it. But since that hadn't been revealed when this comic was published, at the time it seemed as if this is what is supposed to happen to Jedi when they die, so I'll not moan too loudly, especially as we're going to see it again before the end of our journey through The Tales of the Jedi.

Final Words : It's no wonder that the Tales of the Jedi stories are so well remembered and regarded, they really are excellent. I intend to keep doing a bunch of the other Dark Horse comics series (such as Crimson Empire, and the Dark Empire trilogy), and I wonder if Tales of the Jedi is uniquely good, or whether the quality will hold up throughout?